Dallas Cowboys Linebacker and Captain Sean Lee will likely miss time with a hamstring injury suffered during the team's Week 3 loss to the Seattle Seahawks.

Lee, who'd hurt his other hamstring in Week 2 against the Giants, had to leave yesterday's game with a new injury to the alternate leg. His status was reported on today by NFL Network's Ian Rapoport. 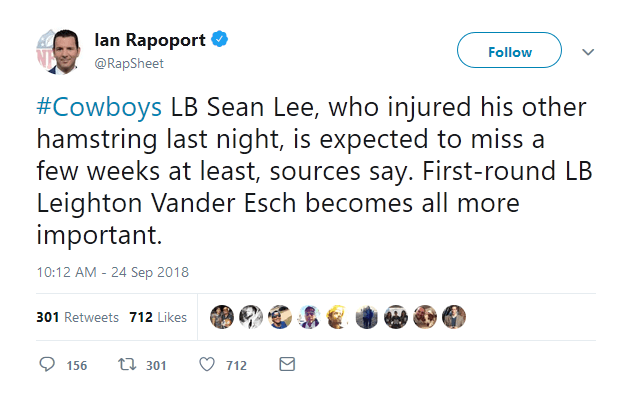 Another season of injury problems could put Lee's future with the Cowboys in jeopardy. In fact, it may only cement what was already a strong possibility.

Sean can be released next season for about $7 million in salary cap savings, and his replacement is already on the roster.

Lee is still a top NFL linebacker when healthy. But “when healthy” has been said far too often, and the Cowboys used their first-round pick this year to prepare for such a problem.

We'll see how long the 32-year-old has to sit out, and what impact that has on his career going forward.

Jess Haynie
Cowboys fan since 1992, blogger since 2011. Bringing you the objectivity of an outside perspective with the passion of a die-hard fan. I love to talk to my readers, so please comment on any article and I'll be sure to respond!
Previous article
3 Stars from Dallas Cowboys Loss to the Seattle Seahawks
Next article
Sean’s Scout: Poor Execution, Timely SEA Passing Game Doom Cowboys

Welcome back to another edition of the Countdown to Kickoff series. In today's post, we're covering the Greatest #50 in Dallas Cowboys History, but...
Cowboys News

The Dallas Cowboys have been a pipeline for NFL broadcasters, with their most visible former player being current CBS lead color commentator Tony Romo....