The wait is finally over. After years of being snubbed former Dallas Cowboys Head Coach Jimmy Johnson has been elected to the Pro Football Hall of Fame class of 2020. An emotional Johnson was surprised by Hall of Fame President David Baker during the FOX Halftime Show of the divisional playoff matchup between the Seattle Seahawks and Green Bay Packers.

Legendary @dallascowboys coach @JimmyJohnson finds out live on TV he is the newest member of the Pro Football Hall of Fame! pic.twitter.com/GK3jlSlWRz

Obviously moved by this, Johnson was humbled after hearing the news that he was headed to Canton.

“The only thing I can think of is all the assistant coaches that worked for me, all the great players that played for me, they're the reason I'm here,” Johnson said on the FOX halftime show. “This is so special to me because when you put in the work that we put in, it's nice to know people appreciate it.”

Johnson was fresh off of a five-year run with the Miami Hurricanes from 1984-1988, winning the national title in 1987. Johnson, a college teammate of Owner Jerry Jones at Arkansas when the two were members of the 1964 national championship team, was brought in prior to the 1989 season. His first year was a disaster as the Cowboys possessed the NFL's worst record at 1-15. They would improve to 7-9 in 1990, then to 11-5 in 1991 and won their first playoff game since 1982. 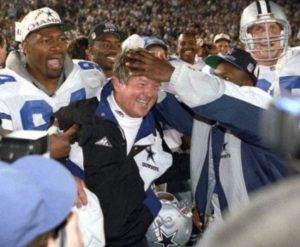 In 1992, everything fell into place. The Cowboys went 13-3 and were the number two seed in the NFC. After dismantling the Philadelphia Eagles 34-10 in the divisional round, the Cowboys traveled to old Candlestick Park to face the San Francisco 49ers in the NFC Championship Game. Not wanting to be just a guest at the party of the mighty 49ers, would have won four super bowls in the previous 11 seasons, the Cowboys pulled off the upset 30-20 and advanced to face the Buffalo Bills in Super Bowl XXVII in Pasadena.

They wouldn't leave any doubt in this one, forcing a super bowl record nine turnovers and scoring the second-most points ever in the big game. The Cowboys routed the Bills 52-17 as Troy Aikman was named Super Bowl MVP going 22 of 30 for 273 yards and four touchdowns.

In 1993, the Cowboys lost their first two games while Hall of Fame Running Back Emmitt Smith was trying to secure his long-term future. Once he was signed, the Cowboys won 12 of their final 14 games and Smith was named league MVP. After beating the Packers 27-17 in the divisional round, the Cowboys had a rematch with the 49ers in the NFC Championship. As expected, the Cowboys dominated 38-21 after Johnson guaranteed a victory leading up to the game. 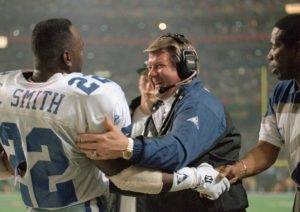 In Super Bowl XXVIII the Cowboys had another date with the Bills, and once again it wasn't close. Winning 30-13, Johnson had firmly established the Cowboys as the standard in the NFL and the team of the 90s by winning back to back super bowls. Unfortunately, the relationship between Johnson and Jerry Jones couldn't go on any longer, as both sides decided to part ways in March of 1994. Johnson went 44-36 during his tenure in Dallas. He would finish his NFL career with the Miami Dolphins where he went 38-31 in four seasons from 1996-1999.

Johnson is remembered as one the greatest evaluators of talent ever in the sport of football and one of it's best coaches, and now a Hall of Famer. In Cowboy's country, he'll be remembered as the man that brought the Cowboys back to prominence in the 1990s.

Matthew Lenixhttps://mlenixsctx.wordpress.com/
I write dope stuff about the Dallas Cowboys and what not.
Previous article
Report: Doug Nussmeier To Stay With Cowboys as QB Coach
Next article
10 Free Agents With Ties to the Dallas Cowboys new Coaching Staff

It’s about damn time!!! What else is a travesty is Jimmy Johnson’s glaring absence from the Cowboys ring of honor.