Once the offseason began in February, the Dallas Cowboys were in need of another pass rusher to complement All-Pro DeMarcus Lawrence. In late March, they acquired Robert Quinn from the Miami Dolphins, and for only a sixth-round pick in 2020. Quinn came into the season with 69 career sacks in his first eight seasons, which included three consecutive double-digit sack seasons from 2012-2014, and All-Pro/Pro Bowl honors to boot. However, the month of August was a rough one for Quinn, in a matter of days he not only suffered a fractured hand but was suspended for the first two games of the 2019 season for violating the NFL’s PED policy.

The Cowboys didn’t miss a beat without Quinn as they dominated the New York Giants and Washington Redskins. Even with that being the case, it was clear that the pass rush could have been a lot better with only 2 sacks in the first two games. Quinn wasted no time making an impact in his Cowboys debut, as he brought down Josh Rosen for a sack in the third quarter. Quinn explodes around the edge, maintains his balance and brings him down, then get his boogey on in enjoyment, as seen in the video below.

Robert Quinn on the dance he did after his first sack as a Cowboy: “I kind of joked around with it during our media day thing. Then I was like, ‘Shoot, what do I do?’ Then boom, it just came out. I guess that was like a Cowboy.”

Quinn was credited with an amazing seven quarterback pressures in his first game as a Cowboy. To put it in perspective of how good that is, DeMarcus Lawrence has ten total in three games, mind-blowing.

Robert Quinn had this to say postgame about getting seven pressures against his former team: 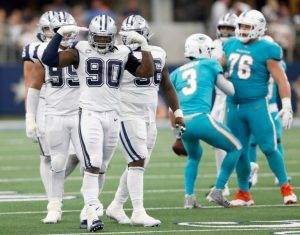 With Quinn firmly in the mix already this should benefit All-Pro DeMarcus Lawrence.  According to ESPN Sports Analytics Writer Seth Walder, Lawrence has seen double teams on 35% of his pass rushes, which is the most for all edge rushers league-wide. Even though he did manage to record a sack against the Dolphins, he only had a half-sack entering last week’s game. Now with Quinn causing havoc on the right side, Lawrence can get back to dominating like he did the previous two seasons, as his 25 sacks over that span rivaled perennial All-Pro’s Khalil Mack and Von Miller.

Lawrence himself recognizes that his opportunities to make an impact increase with Quinn, as he explained earlier this week:

“The only thing that can evaporate daylight is speed,” Lawrence said. “Being able to have more speed on the opposing side is great for me. Now I can make any move I want to.”

As the Cowboys prepare to head to New Orleans for a Sunday Night Showdown against the Saints, they’ll need their pass rush to rattle backup Quarterback Teddy Bridgewater. Even without Drew Brees, this offense is loaded with weapons. The duo of Lawrence and Quinn will be vital in setting the tone in the trenches.