It took some time, but the Dallas Cowboys have their first outside free agent of the offseason, signing Linebacker Joe Thomas to provide depth at a position where Anthony Hitchens and Kyle Wilber have already signed elsewhere.

The fifth-year pro has played exclusively with the Green Bay Packers, but the Cowboys do have some familiarity with Thomas as he spent part of 2015 on their practice squad.

Joe Thomas has served as a core special teams contributor and sub-package LB for the Packers out of South Carolina State, and will now look to bring these services to a Cowboys team in need of play making ability on both defense and special teams.

Using film from this past season, here is Joe Thomas' full scouting report.

Joe Thomas lined up at all three LB positions for the Packers, taking the majority of his snaps on defense at MIKE or WILL. The WILL position is where Thomas should fit best in Dallas.

Not overly physical with a shorter but square frame, Thomas is a rangy player with light feet and fluid movement ability. Shifting laterally along the line of scrimmage to “pick through trash” is not a problem for Thomas, nor is flipping his hips and running to the football.

It may take Thomas more effort than it should to get in position on most plays, with false steps and late reads being an issue, but once he establishes his sight on the point of attack this is a downhill missile of a player.

Joe Thomas uses his length well to disengage from blocks and finish off plays, doing a nice job of not allowing blockers into his chest consistently.

With Sean Lee and Jaylon Smith expected to be the Cowboys' primary starters at WILL and MIKE respectively, Thomas could supplement these two physical, well-rounded players extremely well given his athleticism.

There is a reason a player with the raw traits of Joe Thomas goes un-drafted, and in this case it is because of awareness and anticipation issues in Thomas' game.

Far too often on tape, Thomas is forcing himself to recover from false steps against the blockers in front of him. I would have loved to see a player with this movement ability get more clean opportunities to finish at the football, but it was simply not there for Thomas.

When Thomas wasn't late to the ball against the run, he was getting caught flat-footed in space trying to compensate for this reactionary ability. This led to Thomas' fair share of missed tackles, where the LB failed to break down correctly.

Overall, Thomas did a decent job of avoiding blocks and disengaging, and does play with better-than-expected stopping power. The strength and technique to shed blocks was rarely seen though, relying on his quickness to outrun opponents to the spot. 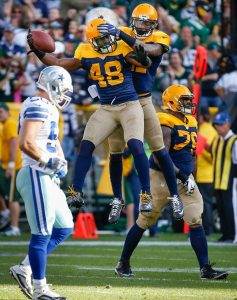 This is a player that should help the Dallas Cowboys in two phases of their game this season.

Signed for both 2018 and 2019, the Cowboys have clearly seen enough from their former practice squad linebacker in Green Bay to bring back an athletic ST ace with upside on defense.

Joe Thomas shouldn't be taking Lee or Smith off the field regularly this season, but at his best he will factor into Rod Marinelli's defense on passing downs.

Thomas gives a unit predicated on flowing to the ball even more speed on the field, and is an ideal depth signing with the versatility to cover punts and kickoffs.