The first practice of training camp is on July 27th for the Cowboys, which isn’t very far off. That also means that the preseason isn’t too far off either. In other words, football is inching its way closer. Up to this point, free agency, the draft, and waiting on potential contract extensions have been the only thing tiding everyone over until football starts. Now, the wait's almost over.

At first glance, this Cowboys team is as talented and as deep as it may have ever been. So much so that Jason Witten came out of retirement, Randall Cobb took a one-year deal, and Earl Thomas tried his hardest to be a part of it. Being this deep is a gift but also a curse.

The team can only carry 53 players and there’s at least 70 that could be on an opening day roster that won’t make final cuts, making this one of the hardest preseasons to cut talent. A lot of the time, a player isn’t let go because of ability but because the team needs an extra roster spot or two for a position group that needs more help.

For example, last year, the Cowboys kept seven receivers and four tight ends when they had no number one target and wanted to give Dak Prescott as many options as possible to succeed. This season, we’ve got a pretty good idea who has a rhythm with the offense.

Given what the team needs most and where they’re strongest, a lot of talented names will either be practice squad bound or stuck on the waiver wire.

L.P. Ladouceur is the long snapper. Brett Maher is the kicker. Chris Jones is the punter. This is the easiest position group to predict. Let’s move on. 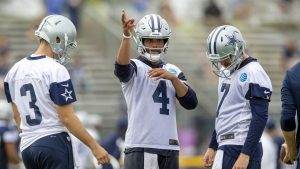 Dak Prescott’s contract extension is imminent. At this point, it’s not a matter of if but rather how much he’ll get. The goal is to get everything done before the season starts and before another young stud quarterback resets the market.

The real question is who will back up Prescott.

Last year, the Cowboys kept both Cooper Rush and Mike White, but now they’ve had a full year with both and will determine the permanent backup during the preseason My guess would be that Mike White has the edge simply as a pure passer, but I’d be surprised if they keep more than two. 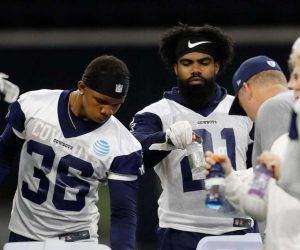 Barring an Ezekiel Elliott holdout, he’s still your lead dog with Jamize Olawale as the fullback.

Tony Pollard is expected to be the team’s Duke Johnson or Alvin Kamara (not a comparison) who will play a factor in the return game, line up as a receiver, catch passes out of the backfield, and have an impact on their third-down offense.

Darius Jackson and Mike Weber will fight for the third running back spot. Whoever wins this is either a player who’ll not make the game day 46-man roster or have their biggest impact on special teams.

The other could be a likely candidate for the practice squad if they clear waivers. 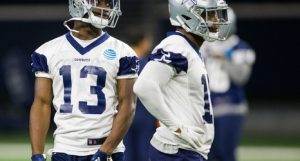 Amari Cooper, Randall Cobb, and Michael Gallup are the only receivers that I would call a lock for the final roster. They’re the starting trio and one of the best ones the Cowboys have had in some time.

After these three, someone like Tavon Austin is not guaranteed a spot, and young players like Cedrick Wilson, Jalen Guyton, and Jon’Vea Johnson will need to prove they belong while in camp.

Noah Brown would be the next receiver I’d be comfortable saying will get a spot. He’s primarily the team’s H-back, or as my colleague, John Williams likes to call him, a light end. He’s a valuable blocker and receiver out of the backfield.

The receiver group will be the toughest to trim. It’s so deep and full of talent, but there’s one position group that’s in need of more bodies. 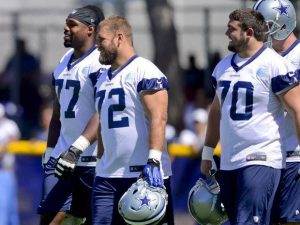 Aside from the starting five, throw in eventual starter Connor McGovern, swing tackle Cameron Fleming, Joe Looney at center, and a competition for the next spot with Xavier Sua’Filo, Mitch Hyatt, Jake Campos, and others; the offensive line will be the deepest position group on offense.

There are definitely still some concerns with the Cowboys three best linemen, Tyron Smith, Zack Martin, and Travis Frederick. Frederick is coming back from Guillain-Barré Syndrome, and Smith and Martin battled injuries during the season. They should be fine going into 2019, but caution is probably the right move.

It’s hard to know if the team decides to keep another tackle or interior lineman, but expect reinforcements. Remember in Tony Romo’s final years, the team kept an additional quarterback on the roster in case the team had to deal with another injury to an important player.

This time around, it’ll be about protecting the team’s first line of defense, which protects their most important player. 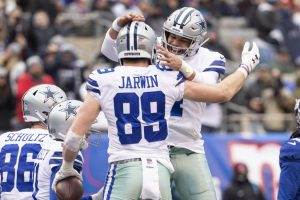 Jason Witten is back and will likely take over the number one tight end spot he left with. He’s not the player he once was but a year off to get healthy should give Prescott another reliable target.

Blake Jarwin looked at the end of last season like he’s the future at the position. Hopefully, Witten coming back doesn’t take away time with the first-team offense and hurt his progression.

The final spot is going to come down to Dalton Schultz and Rico Gathers. The Cowboys took Schultz in the fourth round last year and he has shown to be a reliable blocker, but Rico Gathers is the better athlete who hasn’t progressed the way the team had hoped up to this point. This will be a battle to watch in camp. 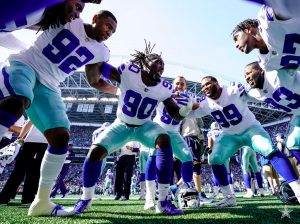 This is Dallas’s most loaded group, which is ironic because two years ago it was the team’s biggest weakness.

DeMarcus Lawrence got his mega-contract this offseason, the team signed Kerry Hyder and Christian Covington, traded for Robert Quinn and drafted Trysten Hill in the second round of this year's draft.

Veterans Maliek Collins, Tyrone Crawford, Daniel Ross, and Antwan Woods return to the squad, while young players like Taco Charleton and second-year edge rusher Dorance Armstrong Jr, draft picks Joe Jackson and Jalen Jelks, and undrafted Daniel Wise will have to compete for snaps. We will have to also keep our eyes on the Randy Gregory situation as well.

This is the hardest group to guess who stays but it will also be the deepest group on the team, with the toughest cuts. 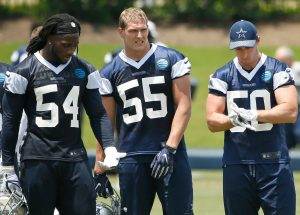 Leighton Vander Esch and Jaylon Smith are the NFL’s best young linebacker duo. Add Sean Lee to this and it's arguably the best overall linebacker core.

Behind them, Joe Thomas and Justin March-Lillard both gave this team a lot of meaningful snaps off the bench and on special teams. Plenty of other players will compete for that last spot.

Last year's fifth-round pick Chris Covington is an option, as well as undrafted rookies Nate Hall, Andrew Dowell, and Luke Gifford. This will be where the real competition is. 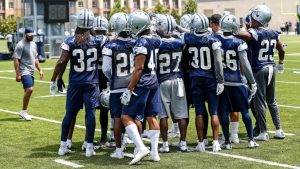 The cornerback room is set. Byron Jones, Chidobe Awuzie, Jourdan Lewis, Anthony Brown and fifth-round draft pick, Michael Jackson. This is who will be there, barring injury. Safety, on the other hand, could feature a lot of new names. Xavier Woods is this team’s best safety and a starter, and Jeff Heath will likely still be the day-one starter opposite him.

Rookie Donovan Wilson has a lot of talent, and had he not been injured at Texas A&M, might’ve been a higher draft pick. Kavon Frazier might be this team’s best special teams player who doesn’t kick or snap the ball. George Iloka was brought in to provide veteran leadership but is not a lock. Lastly, Donovan Olumba and Kyle Queiro showed a lot of skill last offseason and how well they developed in year two could factor into the decision.

Shane Carterhttps://dawgpounddaily.com/author/scarter1/
Lifelong Cowboys fan, who doesn’t mind telling the harsh truth. I’ve got a Bachelors Degree in Electronic Media and Communications from Texas Tech University. I welcome all opinions but I will shut down any troll.
Previous article
Dallas Cowboys 2019 Training Camp Preview: Running Back
Next article
Report: Ezekiel Elliott Expected to Report, Dak Prescott to get Extension

Waiver claims from the final cutdown day have come and gone and the Cowboys didn't take any losses. None of their waived talent from...
Cowboys News

Gone Today, Back Tomorrow: Some Cowboys Cuts are Only Temporary

As news of roster cuts is rolling in from all over the NFL, you may be shocked by some of the names popping up...

No mention of Chris Westry? Not even for the Practice Squad. 6’4″ and sub 4.4 speed has got to at least give him a chance.
Part of me simply thinks “faster Patrick Watkins”, but I’d love to see Kris Richard develop him.
I also hope and believe that Mike Jackson will be able to do it all. Outside, nickel, either safety position…
Kyle Q. just doesn’t have the speed I don’t believe. I also believe that if ANY of the youngsters show that they can play Special Teams Kavon Frazier, who I’ve rooted for to take the Strong Safety job the last 2 seasons, will be the odd man out and not make the final roster.
As for DL, I know it won’t happen but I’d love to see T. Crawford cut to give a young guy a chance.
We did it with the secondary a couple of years ago. Let’s do it with the D-Line, youth movement. I’d love to see Joe Jackson show that he can give us what T. Craw currently gives us and get even more cap space ready for next season.