The Dallas Cowboys will play their first NFC East action tonight when they host the New York Giants in Arlington, TX. Both teams will be looking for their first win on the year and playing on prime time, this is bound to be a fun football game. For the Cowboys, there are many things to improve after week 1 if they’re to turn things around. Let’s talk about some of the things we want to see from the Dallas Cowboys tonight.

Let me know your wishes in the comments section below or tweet me @MauNFL!

Wish #1: Win in the Trenches

The Cowboys front seven should win the battle against a weak Giants offensive line. New York added talent to their unit in the offseason to make things better, but Dallas has the edge here. DeMarcus Lawrence will face RT Ereck Flowers, which is a battle I expect him to win all night long.

Pressuring Eli Manning is a must to try to avoid any sort of big plays by the visiting offense.

On the other hand, the Cowboys offensive line needs to improve as well.

Tyron Smith wasn’t at his best against the Carolina Panthers, La’el Collins was responsible for a couple of holding calls, and Connor Williams got beat in his NFL debut versus Kawann Short. They have a lot to prove versus the Giants rush defense.

Well, it’s time we address the most discussed topic in Cowboys Nation this week.

Scott Linehan’s offense has caused a lot of frustration for Cowboys fans due to a lack of long-yardage plays. Dak Prescott hasn’t had many opportunities to throw downfield and, when he has had the chance, his throws have been inaccurate.

The Cowboys have NEVER lost a regular season game when Dak averages over 7 yards per attempt. They are a perfect 18-0.

Dak must throw the ball down the field if the Cowboys offense is going to be successful. @NFL #NYGvsDAL #DallasCowboys

It’s time the Cowboys use the wide receivers they acquired in the offseason and put Dak in positions where he can feel comfortable throwing it deep.

The main attraction on this offense is Running Back Ezekiel Elliott, who carried the ball only 15 times last week. The Carolina Panthers loaded the box literally half of their defensive snaps. In order to win tonight, Elliott & Co. must confront a tough Giants defense by establishing the running game early. It’s important for them not to give up on their rushing attack.

Without it, the passing game will end up suffering a lot as well. So, feed Elliott, let him do his thing, and this offense will be able to move the chains.

Connor Williams‘ first test against one of the best defensive tackles in the league didn’t go as planned, but he should improve as the season continues. His success is very important for the rest of an offensive line that is already playing without its starting center, Travis Frederick.

Leighton Vander Esch expects to have a bigger role on defense tonight after finishing last week’s game with only two tackles. Dallas Cowboys media member Bryan Broaddus even hinted at Vander Esch starting at SAM versus the Giants, which is worth keeping an eye on.

Finally, I really hope Michael Gallup is more involved in the Cowboys second game of the year. Gallup has the talent to be a starter but – for some reason – his participation versus the Panthers was very limited. I really wish they give the third-round rookie more snaps in an attempt to get him going. 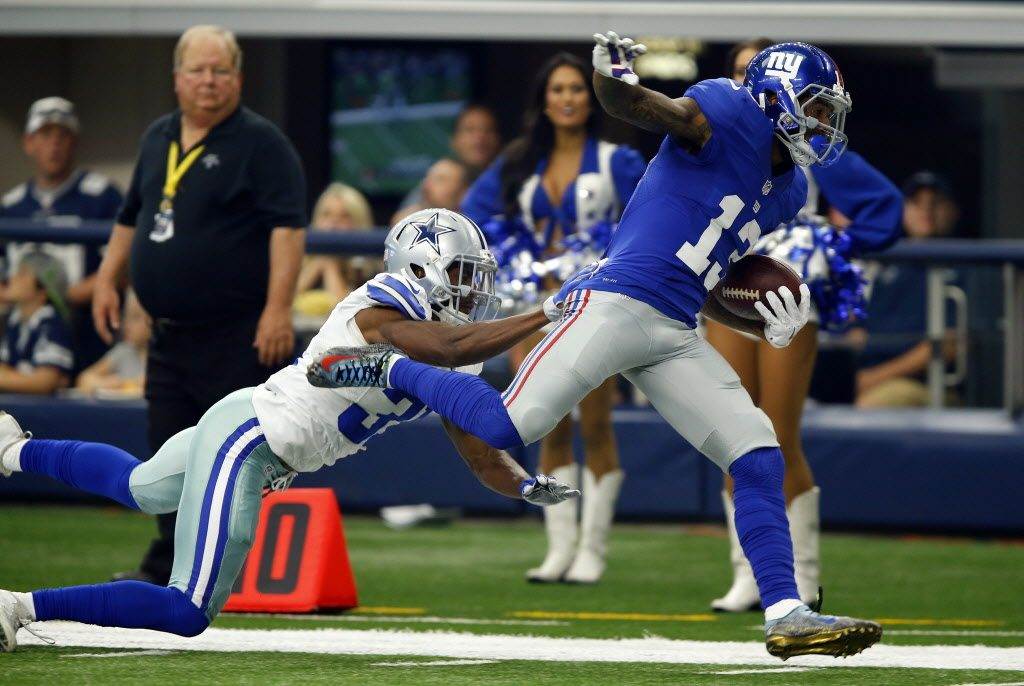 Whoever wins this Sunday Night Football matchup will likely be determined by the defenses. Both offenses have been mediocre, for different reasons. In such a close game, one player can make all the difference. For the Giants, this player is undoubtedly WR Odell Beckham Jr.

The Cowboys know this.

Even more than the second overall pick, Saquon Barkley, the Cowboys’ key to win this football game will be limiting a wide receiver that needs only one play to turn a game around.

Tell me what you think about “Sunday Night Football Wishlist: New York Giants @ Dallas Cowboys” in the comments below, or tweet me @MauNFL and let’s talk football! If you like football and are looking for a Dallas Cowboys show in Spanish, don’t miss my weekly Facebook Live! show, Primero Cowboys!