Dallas Cowboys fans should be happy about the change of pace in the conversation surrounding America's Team. A week ago, the talk in Cowboys Nation was all about just how hot was Jason Garrett's seat. Three consecutive losses will do that to most fan bases. Fortunately, though, we can put a pin on that conversation for a while after the Cowboys handily defeated the Philadelphia Eagles 37-10 last Sunday Night.

It was a great team performance all around, but we should dive in to the specifics. Overall, it was a good win to claim the NFC East division lead as the Cowboys get ready to rest this upcoming bye week. Let's get to this week's takeaways!

Ezekiel Elliott Played His Best Game of the Year

The way Ezekiel Elliott ran versus the Eagles' defense reminded me of his rookie season. Elliott has had a pretty good season even though the Cowboys haven't leaned as much on the running game as they had the last few seasons.

Last Sunday, he accounted for 111 rushing yards and 36 receiving yards. But it wasn't about his total yardage. What was special was the way he juked defenders, broke tackles and fought for the dirty yards.

There was a fire about #21 and I'm sure Cowboys Nation is just as excited as I am to watch it. He truly was something versus the Eagles.

Ezekiel Elliott's best game of the season BY FAR. Look at this chart from Next Gen Stats. Green lines mean 5+ yards gained or touchdown. pic.twitter.com/wIYOwlVkfG

Not to mention, Elliott was extremely effective as he found multiple ways to have 5+ yard run after 5+ yard run. Simply put, an impressive performance from the Cowboys superstar running back.

I don't know if it was his huge contract that turned many fans against DeMarcus Lawrence early in the season, but the Cowboys' defensive end managed to silence doubters against the Eagles. On his way to one sack and one forced fumble, Lawrence dominated in the trenches.

He was solid versus the run and kept pressuring Carson Wentz all game long.

The truth is that D-Law has played well this offseason, but constant double-teams and the lack help from the interior defensive linemen have kept his box score stats down. However, when you look at more advanced metrics such as pass-rush productivity, you'll notice Lawrence is still playing at a very high level.

His play versus the Eagles proved that to many fans watching at home.

I was intrigued by the Cowboys lining him up against the Eagles' LT, trying to exploit the fact that Jason Peters was out injured. I wonder if Rod Marinelli continues to look for favorable match-ups in the future and keeps moving him around occasionally. 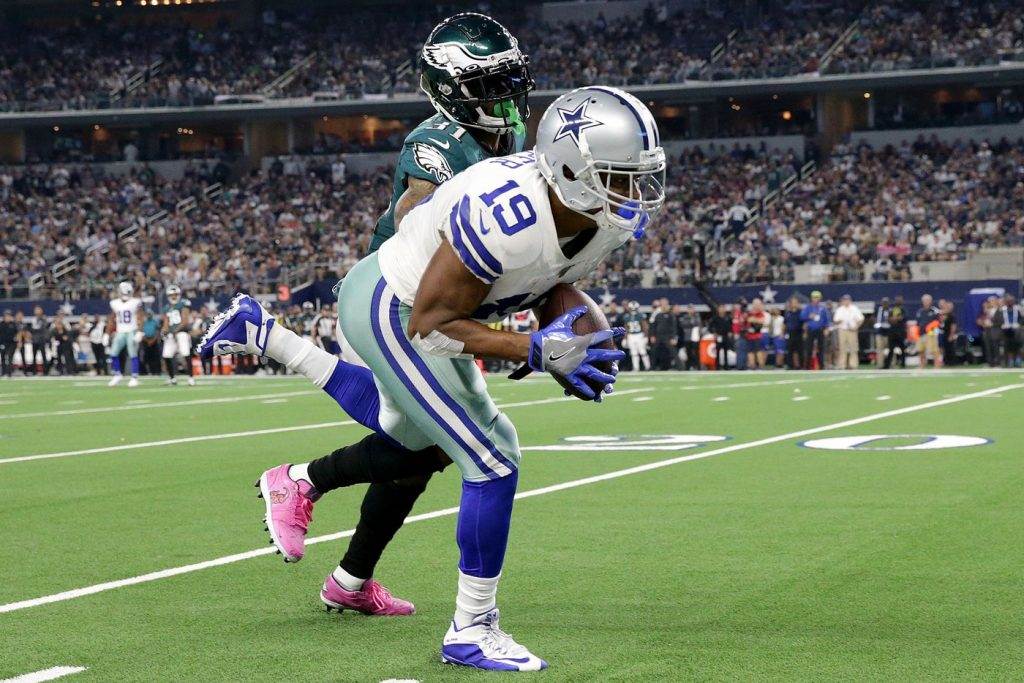 After Amari Cooper's quad injury against the New York Jets, reports emerged on him being in “terrible pain.” Many doubted he'd even play against the Philadelphia Eagles but he did, along other key players who were dealing with injuries too. In his return to the field, Cooper led the Cowboys receiving core with 106 yards in only five receptions (five targets).

Once again, his route running was on full display. He managed to burn a secondary that has been far from great this year. The Cowboys needed him to show up, and he delivered. He even caught a 44 yard pass when he absolutely destroyed Eagles DB Rasul Douglas on a double-move. Cooper would also have a diving jaw-dropping catch later in the game.

It's fair to assume he's healthy and ready to go for the rest of the season.

Takeaways and a strong defensive performance against the pass secured the win for the Cowboys, but the run defense continues to be a problem for Rod Marinelli's unit. The Eagles running backs combined for 103 rushing yards and Dallas was beaten in the trenches a handful of times on this game.

The linebackers looked drastically better, and Leighton Vander Esch had his best half this season so far. Fortunately, it seems like his injury isn't serious enough for him to miss any additional playing time.

However, there were a handful of plays in which the Cowboys' defensive tackles were pushed around again. If I had to choose one position to upgrade, I wouldn't hesitate to address the interior defensive line. It's a problem.

Mauricio Rodriguezhttps://www.facebook.com/PrimeroCowboys/
I love to write, I love football and I love the Dallas Cowboys. I've been rooting for America's team all the way from Mexico ever since I can remember. If you want to talk football, I'm in... You'll find me at @MauNFL.
Previous articleThis Defensive Drive Sealed the Game for the Dallas Cowboys
Next articleWill Cowboys Bring Back Anyone From Injured Reserve After Week 8?

Add another W to the win column, as the...
Game Notes

Not really. I’ve thought Lawrence was great since his rookie year when he had 2 strip sacks v. Lions in round 1 of the playoffs in the 2014 season after missing most of that season with an injury. I agreed that they should sign him last offseason but ever since getting bank, he has disappeared. So Sunday Night’s strip sack was great to see but it did not silence the doubters. I need to see a hell of alot more than that not to doubt him after cashing in.