Sometimes, football games are meant to be forgotten as quick as possible. For the Dallas Cowboys, that is the case after a horrendous season opener against the Carolina Panthers on the road. But before we move on from what was a pretty disheartening outing, let's talk about some of the takeaways from last Sunday's game, most of which are negative.

Let's start this week's Takeaway Tuesday with some positive thoughts. The Cowboys' defense looked impressive in many ways, keeping a game that shouldn't have been close due to the poor performance by the offense within the Cowboys reach for four quarters.

The defensive line was swarming to the ball all game long and were mostly beaten exclusively by Cam Newton's read option plays. Even though Randy Gregory left the game early with a concussion, Taco Charlton did a nice job at DE. He managed to get to the backfield consistently. Although he's been widely criticized as a first round pick, Charlton has done nothing but improve and is becoming more and more effective as a pass rusher. If he keeps it up, and Gregory is able to return, the Cowboys will have the great defensive line we all thought he had. Tyrone Crawford will be able to stay at DT, where he had a very good outing on Sunday.

Connor Williams Isn't There Yet, Joe Looney Is Fine

Considered one of the biggest steals in the 2018 NFL Draft, Connor Williams played his career debut across one of the best defensive tackles in the league, Kawann Short, who finished the day with two sacks under his belt. Williams' first test was a difficult one, and it proved that he still has a long way to go in order to be what we all expect from him.

Joe Looney did a pretty solid job replacing All-Pro center Travis Frederick, which is a nice thing to know since there is no timetable for Frederick's return. Looney had no easy task, either, so it doesn't seem like a concerning situation so far.

I'll start by saying I believe in Dak Prescott as a legit starting QB in the NFL. Despite his struggles, he has what it takes to turn things around. However, he looked terrible versus the Panthers. Almost everyone on offense looked bad, but even with a poor supporting cast, Prescott cost the Cowboys some pretty solid opportunities, most notably a deep ball to Blake Jarwin that landed at the tight end's feet.

We know Dak's deep ball isn't great, but I'm surprised by his lack of poise. He isn't as calm in the pocket as he was in 2016 and at times appears to be seeing a lot of ghosts. This was seen as one of his biggest strengths as a rookie, but it may be becoming a problem now. 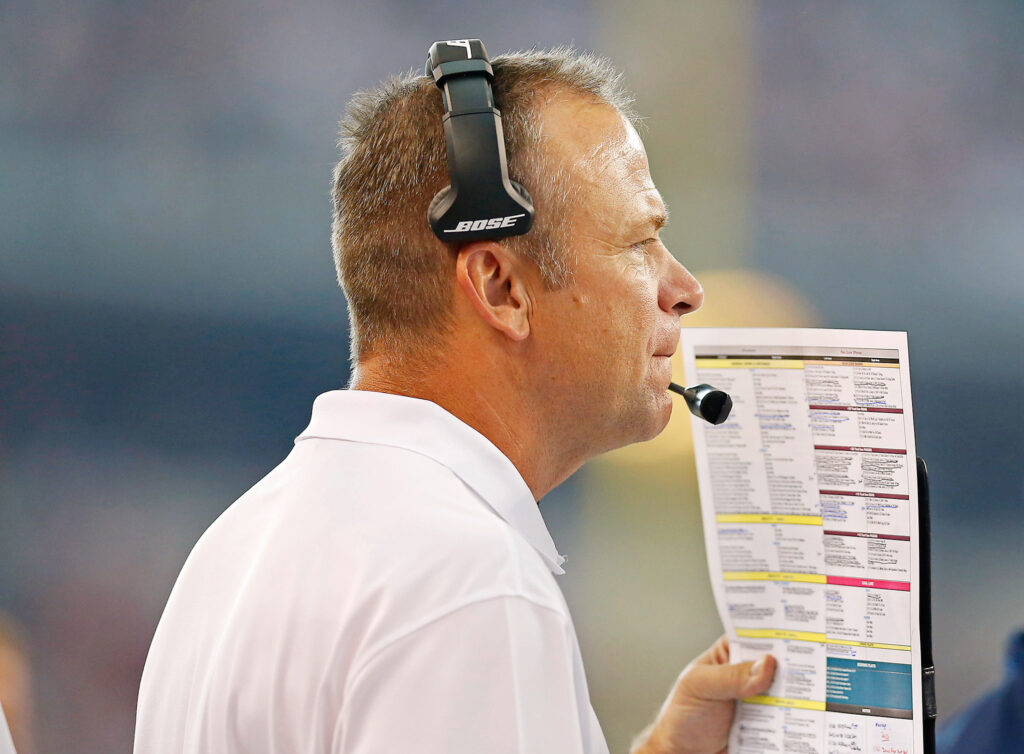 Scott Linehan has been very criticized after a terrible game as well. Jason Garrett has said that Linehan will continue to be the team's play-caller, as expected.  However, it's more than fair to see this as a problem. As much as we criticize Dak for not throwing downfield, there are a lot of times where he doesn't even get the chance.

Cowboys acquired a lot of talent at WR through the offseason, yet they lined up with two tight ends in five wide sets. Why? Linehan should be on the hot seat if his play-calling doesn't improve. You see, I understand if this offense doesn't put 30 points on the board. But they're too talented to be limited to eight.

Michael Gallup Should Be Involved

I know he's a third-round rookie, but Michael Gallup was barely on the field and accounted for only one reception in the entire game. I hope Gallup gets more involved on offense next week, because he's talented and good enough to be a starting WR on this football team. He had a good preseason and proved to be a compatible weapon with Dak.

On offense, only Cole Beasley shined. The passing game is clearly not okay and a spark is needed. Gallup might be that spark.

Mauricio Rodriguezhttps://www.facebook.com/PrimeroCowboys/
I love to write, I love football and I love the Dallas Cowboys. I've been rooting for America's team all the way from Mexico ever since I can remember. If you want to talk football, I'm in... You'll find me at @MauNFL.
Previous article
Jason Garrett & Scott Linehan: Who Has the Hotter Seat?
Next article
Rust or Decline, What’s Behind Sean Lee’s Dreadful Week 1 Performance?

as for dak, i think one thing missing is veteran leadership at the QB spot.

when mark Sanchez was in dallas he was in dak’s ear all the time, after every series with a note pad talking to the guy…that type of knowledge is missing right now. you can say moore but really moore didn’t get the playing time or experience that sanchez had. dak needs a veteran to push him mentally.

Williams looks smallish to me at LG. If the Cowboys are 1 month in and both he and Looney are grading out poorly, the thing to do might be to switch them. Mark Stepnoski was an undersized C, but one of the league’s best because of technique. I’d like to take a look at that before sending Williams to the bench.