With Dak Prescott's hand injury dominating the front page following Dallas' Week 1 loss to Tampa Bay, somewhat disregarded was the rest of the NFC East winning their season openers. If the Cooper Rush-led can find a way to upset the Cincinnati Bengals in Week 2, there's a decent chance that our division rivals could also be 1-1 after Monday night.

Yes, despite two of them playing on the road and the other being Washington, all three of the Commanders, Eagles, and Giants came away victorious in their 2022 debuts. But in those wins, the little brothers of the NFC East all showed some clear weaknesses that could be their undoing against most teams and especially the better half of the NFL.

While Washington posted the biggest victory margin in its 28-22 win over Jacksonville, it was evident that Trevor Lawrence and the Jaguars still aren't quite ready for primetime. Carson Wentz was kind to fantasy owners with over 300 yards and four touchdowns, but he also threw two picks and the run game was held to just 3.0 yards per attempt.

Now the Commanders head to Detroit, catching the Lions when they're surely reeling from last week's loss to Philadelphia. Down 17 points going into the 4th quarter, Detroit rallied with two late touchdowns but ultimately fell short.

The Eagles were mostly good in their win but gave up 181 rushing yards along the way. Some of that may have been strategic, wanting to force Jared Goff to win the game, but their Week 2 opponent is much more balanced offensively.

Philly will host the Vikings, coming off a dominant win over the Packers, in the late game of a Monday Night Football doubleheader. If Minnesota plays like they did last week, Jalen Hurts will likely have to produce through the air for the Eagles to keep up. That's the big question mark for the young QB going into the season, and he wasn't put to the test last week.

The Giants were stunning road winners in Week 1 but it came with several red flags. If Titans' kicker Randy Bullock hadn't missed a 47-yard field goal at the end, New York would be in the basement with Dallas.

A huge day from Saquon Barkley, 164 yards rushing and another 30 receiving, helped mask big issues on offense. QB Daniel Jones was sacked five times and threw a pick despite New York's dominance on the ground.

This week they'll host the Panthers, who are hardly NFL elite but at least have a proven NFL quarterback in Baker Mayfield. If Carolina can slow down the Giants' rushing attack, the pressure goes to Daniel Jones to execute. That's where he and New York have typically fallen apart the last few years.

I know that the whole time you've been reading this, the back of your mind was screaming, “Dallas isn't winning this week so who cares?” But remember, we said the same thing last year when Cooper Rush was starting in Minnesota.

If Rush and the Cowboys can pull off another shocker, the rest of the NFC East could reward them even further. The odds are that at least one of our rivals will win their Week 2 games, but none of them were so impressive in last week that it should be seen as a given.

There is no chance Dallas beats the Bengals this weekend. Even with a healthy Prescott, Dallas would not win. It is a poorly constructed roster. We lost too many good players thanks to the contracts handed out to Dak and Zeke. Thank you Mr Jones for 25 years (and counting) of mediocre teams. 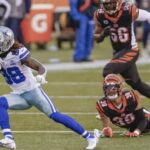