Today's battle between the Dallas Cowboys and Green Bay Packers has the makings of a tough game between evenly-matched opponents. In such a contest, a single turnover can often make the difference between winners and losers. That could very well be how this one turns out.

The Cowboys would likely be 4-0 right now if not two fumbles last week in New Orleans. Both Jason Witten and Ezekiel Elliott gave up the ball after getting Dallas into decent scoring opportunities; even a field goal on one of those drives would have covered the narrow 12-10 margin of defeat.

Similarly, two costly turnovers in Week 4 arguably cost the Packers their game against Philadelphia. Aaron Rodgers fumbled in the first half on a sack and set the Eagles up just 17 yards from the endzone, and then Green Bay's attempt to come back on their final drive ended with an interception on 2nd Down.

Both teams are coming off the sting of those losses, looking to get the season back on track and start October off with a bang. This is going to be a tense game with a playoff-like atmosphere, especially given the recent history between Dallas and Green Bay in the postseason.

The pressure will be on, and this one may come down to a single mistake.

So far in 2019 the Cowboys are -1 in turnover margin. They have one interception by Chidobe Awuzie and a few fumble recoveries, but three picks thrown by Dak Prescott and the Elliott and Witten fumbles slightly outweigh them.

It's worth noting that one of Dak's interceptions came on last week's Hail Mary throw at the end of the Saints game, which sometimes is just the cost of doing business in that situation. It wasn't a mental error like his pick against Miami, or a bad connection like the tipped ball that got picked against Washington.

Still, even if we take that one off the board, Dallas would simply break even on turnovers so far in 2019. Considering their competition the first three weeks, that's fairly discouraging.

This week's competition isn't Eli Manning, Case Keenum, or Josh Rosen. If Dallas had trouble forcing those guys into mistakes, they may be completely stymied against the likes of Aaron Rodgers.

Granted, Rodgers had two turnovers just a week ago. Dallas has to hope that the continued absence of WR Davante Adams will put Aaron in some similar situations, either holding the ball too long or trying to force it to a lesser receiving option.

But last week the Packers lost Adams in the middle of a game, and now they've had a week to prepare for the Cowboys knowing he'll be absent. It should give Rodgers and the rest of the team a better mental approach and improve their execution.

This is where the arrival of Robert Quinn could prove vital to success. The relentless pressure we've seen from Quinn so far in 2019 is something Dallas hasn't had much of in previous meetings with the Packers; DeMarcus Lawrence can't do it by himself.

Rattling Rodgers certainly isn't easy, but Quinn gives the Cowboys a far better chance. He could be the catalyst for some of those precarious situations we just mentioned.

Of course, turnovers don't always involve the quarterback. If Jason Witten and Ezekiel Elliott can lose the ball, the Packers' lesser rushing and receiving talents are certainly capable.

I know that pointing to turnovers as a critical modifier is easy; they've been one of the most consistent factors in game outcomes for as long as football's been played. But there are those weeks where teams can still overcome their mistakes if they truly outclass the opponent.

This won't be one of those weeks for the Cowboys and Packers. The game projects to be a close one, and one play could make all the difference.

We can only hope it's in Dallas' favor. 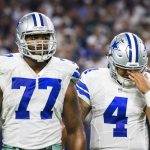 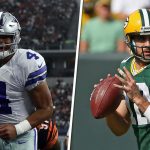