The NFL Draft is now less than a week away and the Dallas Cowboys and the rest of the National Football League ­– said in your best Chris Berman voice — should have their draft boards together after months of due diligence.

While there’s a lot of speculation and a lot of rumors about which player will go where, the fact remains that a lot of what front offices think can be completely disrupted by a surprise or two. Whether it’s a surprise trade up or a player that gets taken before the general consensus predicted, what actually happens during the draft can throw a lot of our preconceived notions out the window.

What I’d like to explore today is the cost of moving up and the benefit of moving down. As we look at it, it’s important to discuss the tool a lot of teams use to allocate value to the draft picks. It’s not a hard and fast tool, but it gives a general idea on the value of these picks.

I’ve highlighted Dallas’ picks in each round and the corresponding value given by the trade chart. This one is from Draftek.com. 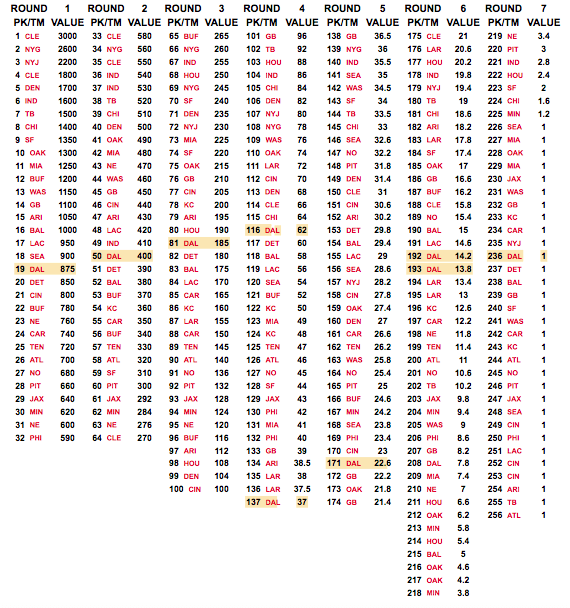 These are just numbers, and there is no telling how teams are going to value picks in this draft, which appears to be pretty deep. So I have to preface this with, picks may not have the value that the trade value chart offers. Just based on the human element of assigning value to picks, a team like the Miami Dolphins could value third round picks higher than a team like the Oakland Raiders.

Only the guys in the room know, and we’ll only know on draft night how they value those picks. The trade value chart gives us a starting point or a frame of reference for what these picks are valued at in a vacuum.

With that being said, let’s look at what it would take for the Dallas Cowboys to trade down.

I’ve been a huge proponent of a trade back with where the Dallas Cowboys are sitting. There’re going to be several football players at 19 that can help them as a franchise. Even a small trade back of 3-5 spots could net them an extra third-round pick that could be very valuable to a team that’s become quite adept at hitting on talent in the middle rounds of the draft.

For example, if the New England Patriots offered pick number 23 (760 points), they’d also have to offer pick number 95 (120) to equal Dallas’ pick at 19 (875). A move back of only four spots could still grant them the opportunity to get a guy with a first-round grade.

If they can get a team like New England, the Jacksonville Jaguars, or Pittsburgh Steelers to come calling, in theory, they could end up with an extra second.

That’s a huge asset to acquire for a team that’s still building its roster, but is close to contending.

Trading back in the first and picking up even a third rounder could allow the Cowboys to move up in the second, if a player they like falls.

Using the same scenario with New England trading up from number 23 to 19 where Dallas also gets number 95, the Cowboys could use number 95 in a trade up in the second round. Pick 95 (120 points) added to pick 50 (400) could, in theory get Dallas up to number 38, where the Tampa Bay Buccaneers are drafting.

Recently, I did a mock draft exploring what it could look like for the Cowboys to trade back in the first round and then up in the second. I think you’ll like the results.

Now that you know my official stance, I want to explore the trade up scenario.

For me, there are really only four players I would make a serious move up the draft board to get: Quentin Nelson, Bradley Chubb, Roquan Smith, and Tremaine Edmunds. Guys that I’d make a small move up the board for would be Harold Landry and Vita Vea.

It’s highly unlikely any of those players will make it to Dallas’ pick at 19, and could all realistically go in the top twelve.

Here’s what it would take to move up.

If you wanted to get to picks 10, 11, or 12, it’s likely you would have to give up both your first (#19) and #50 in the second round. 10 (1300 points), held by the Oakland Raiders, could still require an extra late round pick to be thrown in there, but Dallas’ first and second could be enough to get there.

If the Dallas Cowboys thought that was too rich for them to move up, then using their first and third (pick 81), which would be 1,060 points, gets them to pick 15. If they wanted to get to 13 or 14, they would probably have to include their first fourth rounder as well, valued at 62 points. That would be in the range to get a Harold Landry, who could go to the Green Bay Packers at 14 (1100).

To get to the Baltimore Ravens’ pick at 16 (1000 points), they would likely have to package their first and both of their fourth round picks.

To get to the Los Angeles Chargers at pick 17 would likely only take their first and the first of their two fourths.

There will probably be options to move up in the draft, but they’ll have to ask themselves, is it better to move up or stay where they are and keep their picks.

Anything is possible when it comes to the draft. I don’t think many observers saw the trade the Dallas Cowboys made for Morris Claiborne coming.

With several holes still to fill and depth needed at several positions, these draft picks are valuable. However, the possibility of adding the top offensive or defensive lineman or the top linebacker in the draft could prove invaluable.

I’m still an advocate for trading back in this draft. I think the Dallas Cowboys are going to like their options at 19 and if they stay there and make their selection, I’ll be cool with it.

Thursday will get here before we know it. Enjoy draft weekend.