The Dallas Cowboys finally looked like the team we've all expected them to be against the Philadelphia Eagles this past Sunday. They played a complete-game and absolutely dominated on both offense and defense. This is the kind of performance they needed heading into the bye week.

As stoked I am by the way the Dallas Cowboys played Sunday night against a divisional opponent, I was even more ecstatic to see Running Back Ezekiel Elliott look like the playmaker he has in the past. He showed excellent vision, speed, and burst, something I really haven't seen him do up to this point of the season.

I know quite a few of you may disagree with me, but No. 21 hasn't really looke2 like himself at any point this season. He did however look like the Zeke of old on Sunday against the Philadelphia Eagles. It good to see and it actually started me wondering where he currently stood in the 2019 rushing title race?

I don't know exactly what I expected, but I was little surprised to see Zeke currently sitting at number five amongst the NFL's leading rushers. I don't know if I was expecting him to be a little higher or lower, but he currently finds himself within striking distance to claim his third rushing title in four years.

Ezekiel Elliott is only 123 rushing yards behind Minnesota Vikings RB Dalvin Cook right now. Unfortunately, that number will only increase in Week 8 with the Dallas Cowboys on their bye week. But, it could all even out since only Nick Chubb is the only RB ahead of Zeke whose team has also had their bye week. And with half of the season left there is still plenty of time to close the gap.

Ezekiel Elliott may be down right now, but he's definitely not out. He's going to play a huge role in the offensive game plan for the rest of the season and should be able to put himself into contention of earning his third rushing title in four years. But, it won't be easy. The Cowboys schedule only gets tougher from here on out.

What do you think? Will Ezekiel Elliott be the leading rusher in 2019?

not so sure he will this time around the way cook is running right now.

zeke also didn’t help himself with how he was running in the first few games. his hesitation move that he does/did when given the hand off, much like Leveon Bell, was hurting him. IMO, that stutter / hesitation allows the 2nd and 3rd level defenders to work their way down before he gets to moving, resulting in little to no gain.

in the last game, he got the ball and hit the hole…. made a huge difference for him.

that’s what i see anyway

I agree with you. Where did that stutter move come from. He didn’t do that before.

he actually did it some last year. La Bell runs that way but i think his burst is a bit quicker than zekes so it works for him. his last year in pitt that was all they talked about, how he hesitates and then hits the hole, so zeke decides to adapt that style in 2018.

doesn’t work for 21, he’s needs to keep running like he did last week. 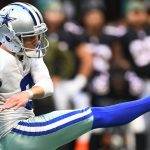 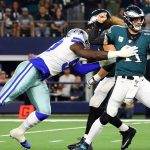