A lot of things will change in the NFC East in 2020. There will be three new head coaches in the division and with four very young quarterbacks, it’s exciting to think about the potential for the four teams. It’s one of the most intriguing divisions in the NFL. The Dallas Cowboys and the Philadelphia Eagles contended for the division title in 2019 after dealing with disappointing seasons but they have talented rosters and should come back strong next season.

On the other hand, the Washington Redskins own the second overall pick while the New York Giants are sitting at number four. There is room for improvement for each team within the division.

But how will they do in the pass rush department? The Eagles have a talented defensive line, top draft prospect Chase Young is likely arriving to the Redskins, DeMarcus Lawrence and Robert Quinn could be together for another year in Dallas and the Giants might be set to spend big in free agency.

Which team will have the best pass rush in the upcoming season? Here’s my ranking.

Right out of the gate, I believe the Giants are out of this conversation unless they make a splash in free agency. With the fourth overall pick, it’s likely Dave Gettleman and Joe Judge address the offensive line. Assuming Chase Young will be off the board by then, there aren’t any convincing edge rushers to take at number four.

Clemson’s do-it-all defender Isaiah Simmons might be an option, but he’s expected to play as a linebacker and/or safety instead of a full-time pass rusher.

According to Over the Cap, the Giants have a cap space of over $60 million. They need to look for a top free agent to help a defense that desperately needs it. Names like Jadeveon Clowney, Yannick Ngakoue among others will be available.

The Giants traded for Leonard Williams last season and have a decision to make on his future. He and Dexter Lawrence could be key pieces for a good defensive line, but this team needs an edge rusher. 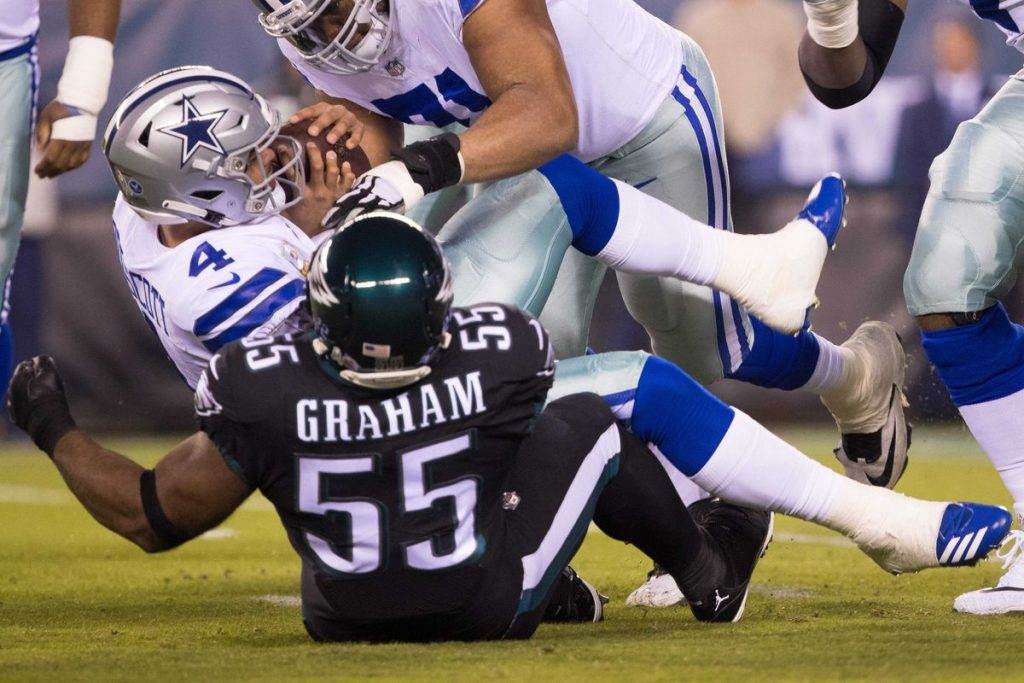 The Eagles defensive line has young and veteran talent. Brandon Graham will be 32-years-old when the upcoming season arrives. However, there’s been no indication of him slowing down. In 2019, he racked up 8.5 sacks, 15 tackles for loss and 17 QB hits.

Derek Barnett was injured for part of the 2019 campaign, but the young pass rusher has shown plenty of potential and should only grow in 2020 if he remains healthy. Vinny Curry and Josh Sweat will also be key pieces for the Eagles’ pass rush going forward.

Fletcher Cox might play in the interior, but he’s great at collapsing the pocket and pressuring opposing quarterbacks.

The Cowboys have a lot of question marks at this aspect of the game. DeMarcus Lawrence is one of the league’s top defensive ends, but will he have help? Robert Quinn was great last season after arriving in Dallas via a trade with the Miami Dolphins. However, his contract is up and it’s difficult to know whether or not they’ll re-sign hin.

If the Cowboys are able to keep him around, this should be one of the league’s best defensive ends duos. Both Lawrence and Quinn were in ESPN’s pass rush win rate Top 3.

However, questions remain at defensive tackle. The Cowboys haven’t had a true pass rushing force in the interior for a while and we’ll have to see if they’re able to upgrade the position.

I’m assuming the Redskins don’t mess up their pick in the first round of the 2020 NFL Draft. When they make their pick, it should be Chase Young on the boat making its way to the main stage in the Bellagio Fountains in Las Vegas. Young is arguably the best prospect in the Draft. He’s NFL-ready and will be a top pass rusher even in week 1.

But the Redskins defensive line has plenty of talent even without Young. Ryan Kerrigan is one of the most underrated defenders in the league. Jonathan Allen and Da’Ron Payne might be defensive tackles, but they can disrupt the pocket constantly. This has been a talented unit for a while but Young’s addition will take it to another level.

Just look at what Nick Bosa catapulted with his arrival in San Francisco. The 49ers had talented players like Arik Armstead and DeForest Buckner, but Bosa’s presence made it the best defensive line in football.

Tell me what you think about “Which NFC East Team Will Have the Best Pass Rush in 2020?” in the comments below, or tweet me @MauNFL and let’s talk football! If you like football and are looking for a Dallas Cowboys show in Spanish, don’t miss my weekly Facebook Live! show, Primero Cowboys!