Training camp for the Dallas Cowboys is set to start in just a matter of days. There will be plenty of battles for playing time at some key positions. One of them will be who gets snaps at defensive end behind DeMarcus Lawrence and Randy Gregory, who will be the starters barring some unforeseen miracle.

A name that will be intriguing to watch in this competition will be Dorance Armstrong. During his collegiate days at Kansas, the Texas native was very productive as he racked up 142 tackles (34.5 tackles for loss), 15.5 sacks, six forced fumbles, three fumble recoveries, and eight passes defended in three years. However, it's been a struggle for Armstrong to consistently find a role with the Cowboys.

In his first two seasons, Armstrong had just 28 combined tackles, 2.5 sacks, and a forced fumble. Although he didn't record a sack in 2020, he had his most productive season in the NFL with 33 tackles, a forced fumble, two fumble recoveries, and two passes defended. It's never been a question of talent with Armstrong it's just been about the consistency.

The 2021 season will be difficult for Armstrong in terms of earning snaps with the log jam at defensive end. Veteran Tarell Basham and rookie Chauncey Golston were added during free agency and the draft. Also, he'll have to contend with Ron'Dell Carter and Bradlee Anae, and with just 32 defensive snaps between them as rookies in 2020, they will certainly be looking to surpass Armstrong on the depth chart.

Armstrong has all the motivation to establish his role with the number of players he'll be competing with, but he's also entering a contract season which will give him an added boost to ball out in training camp and secure the primary backup role to Lawrence, although he's shown the ability to play both defensive end spots.

It's time to put on the pads and get physical this upcoming week, and Armstrong will need to set the tone for a potential second contract with the Cowboys quickly.

The real question is why is there so much hype for Gregory? Gregory has never been a starter and never been reliable. Gregory has been a spot player, pass rush specialist.
There is no track record of his being a 3 down type player. 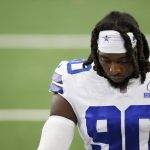 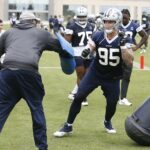