After having his fifth year option exercised for the 2019 season, cornerback Byron Jones enters a contract year this Fall.

Jones inarguably had the best year of his career in 2018: earning not only his first Pro Bowl selection but also Second Team All Pro honors for his performance. Doing it all without an impressive stat sheet, Jones was able to let his film speak for itself throughout most of the year, and he became the number one cornerback we'd all hoped he could be when the Cowboys decided to take the freakishly athletic defensive back in the first round of the 2015 NFL Draft.

This contract year is quite unique for Byron Jones, however. Next offseason the Cowboys will be forced to re-sign and extend just about all of their key contributors on both sides of the ball. DeMarcus Lawrence already got his contract, but Dak Prescott, Ezekiel Elliott, Amari Cooper, and others still await their deals. Deals which the front office has all-but explicitly promised will come.

This leaves Jones, the former first round pick and now former All Pro, generally considered to be the odd man out. So while 2019 is a contract year for Byron Jones, he may be earning himself a contract from a completely different team.

Jones has had an interesting road to this contract season. One which would be a shame for the Cowboys to waste. Moving between cornerback and safety during the first three years of his career, Jones fell out of the coaches' good graces while playing out of his most natural position. Under Kris Richard's new regime, though, Jones had his best season to date. He looked to finally be comfortable in his role, and was now playing for a coach who believed he could be a special player.

Now that Byron Jones has found his place in the Cowboys defense, and has earned his way into conversations with the league's top cornerbacks, he's likely priced himself out of the Cowboys' future plans.

It's funny how that works out. Of course, Jones should go get paid, and I'd never fault a guy for maximizing his value on the market. But there's a good chance the Cowboys make the mistake of allowing a premier cornerback to walk out of their building next offseason. But if they want to retain players like Elliott and Cooper, they may not have any other choice.

This is bad, but if Byron Jones over wants a SB ring and a decent contract, he will have to get them with another team, because he won’t get neither one with the Cowboys

He would be a Dallas Cowboy because the D LIne has a lot of one year rentals, so the backfield can take a chance of not having him, specially with the SS situation still not solved. 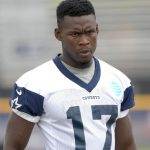 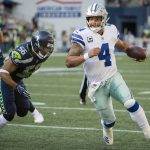