It's a little unusual to see an NFL player get more than one chance to make the roster after being cut already, but that is exactly the situation Running Back Darius Jackson finds himself in with the Dallas Cowboys. Both Jackson, and a lot of Cowboys Nation are hoping that his second chance to stick goes better than his first.

It seems just like yesterday Darius Jackson was competing with Alfred Morris and Darren McFadden to earn one of the coveted RB spots behind Ezekiel Elliott in 2016. He was just a measly sixth-round draft pick then, who was trying to do everything within his power to prove he was worthy of a place on the Dallas Cowboys 53-man roster.

To his credit, Jackson was able to stick around for a little while in 2016 as a rookie, but was eventually waived. You probably know the story from there. He was claimed off of waivers by the Cleveland Browns, but wasn't able to make a mark there due to an unfortunate knee injury. Then, he was re-signed by the Cowboys earlier this offseason to compete yet again for a backup spot behind Zeke.

Finding himself in a crowded backfield once again, Darius Jackson has certainly been doing his best to take advantage of his opportunities, few as they may be. With Rod Smith heavily entrenched as Zeke's primary backup in 2018, Jackson finds himself in a head-to-head battle with rookie Bo Scarbrough, the former Alabama stud RB the Cowboys selected in the seventh-round this year.

Darius Jackson and Bo Scarbrough have both made some splash plays already in the first three preseason games, but it is the third-year RB who I believe has a slight leg up on the competition. Don't get me wrong, I like Scarbrough. But, I think Jackson can help the team in more ways, which could give him the edge he needs to stick around when cuts are being finalized.

I know it's just preseason, but Darius Jackson has not only been explosive when given the opportunity, he's making it look easy. He's really showing the Cowboys and the rest the NFL just what kind of weapon he can be. He has looked excellent as both a runner and as a receiver out of the backfield. But, it's his ability/willingness to play special teams that he gives him the advantage, however slight, over Scarbrough.

Since the Dallas Cowboys pretty much require their RB3 to play special teams, I'm going to give Jackson the nod over Scarbrough. He is after all playing on quite a few of the Cowboys special teams units and even received the chance to show what he can do as a kick returner last week.

But don't worry Bo Scarbrough fans. I believe he still has a chance to stick around in Dallas, albeit on the practice squad. He's shown he can play in the league and the Cowboys coaching staff seems to like him, but for now, I believe it's Darius Jackson's time.

Do you think Darius Jackson will make the Dallas Cowboys roster? 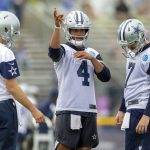 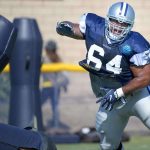