The 2019 Dallas Cowboys season has taken an unfortunate turn. They've lost three straight games after beating three of the worst teams in the NFL. In the past three weeks, they've looked like an unprepared football team that's not ready to be one of the top teams in the NFC. Simply stated, after an offseason of high expectations, they're off to a terrible start. Of course, a 3-3 record is far from the end of the season, but the truth is they shouldn't have three losses right now. The Cowboys, who have been favored on every single game, have failed to deliver. And as panic ensues in Cowboys Nation, Jason Garrett's hot seat is a discussion again.

To be quite frank with you, there's nothing wrong about that. Sure, we're not even halfway into the season. There's still plenty of time to right the ship. We were in the same position a year ago, when the Cowboys had a 3-5 season before bouncing back to the top of the division.

But isn't that precisely the issue? Once again, the Cowboys are in a tough position despite having a talented roster. Both on offense and on defense, results have been disappointing. Once again, this is an unprepared team. It's frustrating, considering many things that were going well last year aren't doing so right now.

Not even Kris Richard and Rod Marinelli's defense that surprised us all in 2018 is having a quality performance right now. They're getting beaten in the trenches and busted coverages in the backfield are a constant sight.

On offense, Kellen Moore's play-calling was on point to start the season, but at times it feels like we're back to the Scott Linehan days. Versus the New York Jets, they ran the ball 17 times on first down, managing to get 2.9 yards per carry. They did so against stacked boxes, too.

On the air, Tony Romo commentated “I see a lot of Jason Garrett's footprints in this offense.” This does little to keep us from wondering if Moore's approach is getting influenced by the head coach. Not to exonerate the young offensive coordinator of any blame, but it's impressive how different this offense looked in the losses to the New Orleans Saints and New York Jets. I definitely don't believe Garrett is taking over play-calling, though. Moore is also responsible. However, the difference between the offense we saw in weeks 4 and 6 can't be overlooked. It was very noticeable.

There's a lot of arguments to be made in favor or against Jason Garrett but one stands out the most to me. Under his tenure, the Cowboys have yet to make the playoffs in consecutive years. Many circumstances have prevented him from achieving it, like Tony Romo's injury in 2015, but it's still a very telling stat. In 2019, he still has the chance to make it to January. But he's in a position he shouldn't be through six weeks.

Execution by the players was also missing, and important players were missing due to injury. But even the ones who played did so poorly. Michael Gallup and Jason Witten dropped passes. Tackles were missed by the front seven and the secondary was burnt frequently. When there are problems all across the board, it's hard not to take a look at the head coach.

What makes things more interesting this particular year is the fact that Garrett is under a one-year contract. In my humble opinion, that automatically means he's on the hot seat, regardless of what Jerry Jones says on 105.3 The Fan. There's a reason why he wasn't extended, and that's because he has something to prove this year.

However, the question should be: is he in any immediate danger? Will he be coaching for his job next weekend?

I texted a #Cowboys source after their 24-22 loss to previously winless #Jets and asked if HC Jason Garrett’s job was in any immediate jeopardy. The response was swift and seemingly emphatic: “Absolutely not.”

Personally, I don't believe Garrett is at risk before the Cowboys play the Philadelphia Eagles on Sunday Night. I can't help but wonder if he'll be coaching for his job that night. It would be surprising, given how many times we've thought Garrett is on the hot seat before the team turns things around and we forget all about it.

But things look grim right now. They look different. The Cowboys have fallen to .500 by losing to an 0-4 New York Jets team that also had a couple of key injuries (LB C.J. Mosley and TE Chris Herndon din't play). Garrett called a timeout with 47 seconds remaining on the clock, ending the Cowboys' hopes for a long-shot comeback. In the past couple of weeks, they've had 20 penalties for 192 yards. According to nflpenalties.com, the Cowboys are the the second team with the most “against yards” in penalties through six games.

The team hasn't been able to have a good start against any rival yet. Not even when they played the tanking Miami Dolphins.

Also, I really don't want to make much out of a ten-second video, but this clip of Cowboys players leaving Jason Garrett hanging is at the very least intriguing. It might mean nothing, it might mean a lot. Who knows? If it does mean something, though, his time should be over. His players have always believed in him. When that ends, there's really not point in keeping him around. I insist though, this is nothing but a ten second video. So I'd rather not make too much of it.

Not a good look for Jason Garrett. pic.twitter.com/g005ZJVwRl

Jason Garrett should definitely be at risk. It's only fair. He's the head coach of a football team that should have a big year but is being outplayed and outcoached. Does he have a chance to turn things around? Sure. However, if the Cowboys lose four consecutive games before the bye week, this conversation will be a lot more serious, and rightfully so.

The Cowboys have been in such a rough spot before. Garrett has been able to make his players fight for him and the team. How will it turn out this time?

Should Jason Garrett be coaching for his job next Sunday?

Jason Garrett should not even be the HC versus the Eagles Sun. but I guess if he is, then by all means yes, this Sun. should be a make or break game for Garrett. It is the same old story every season with him. They are so up and down every season. He is not a SB caliber coach, and I don’t know when Jerry is going to see that. And that wonderful OC, Kellen Moore, he’s a bigger flop than Scott Lineman was, he needs to be kicked to the curb along with Garrett. The last 3 games the Cowboys offense has been horrible, and what happened to this much improved defense? The whole team has been pathetic. Demarcus Lawrence got his big contract and now just doesn’t put for any effort to sack the opposing QB anymore? Zeke hasn’t been much better either. He had like 35 yards against the Saints. Not too impressive for a RB who signed a contract making almost $14 million a year. Time to clean house I would say

This teams’ schematics don’t show any success and the only ones who come up with game-plans and playbook plays for the offense is Garrett and Moore. The players are not happy. They all know they won’t win many games with the coaching staff that they have. They’re just not creative enough and too transparent. Why can’t they just play the same schematics that they played in 2016?

Any discussion of removing a HC involves actually replacing him with someone. Well….who is that someone? It must be someone currently on staff. So…who is that? Every positional or group coach has had their unit show serious issues of poor performance. Who on staff could choreograph a drastic improvement in the team’s overall performance. Until you have the answer, it’s foolish to pose the question. 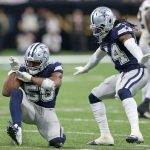 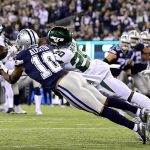