Yesterday evening it was reported that Kicker Greg Zuerlein has been placed on the Reserve/COVID-19 list and is unlikely to play in Dallas' Week 10 matchup against the Atlanta Falcons. Today they will be working out two potential replacements and both former Cowboys; Brett Maher and Lirim Hajrullahu.

Maher was the Cowboys kicker for 2018 and most of 2019. His exceptional distance and accuracy from long range helped him unseat Dan Bailey, whose performance was in sharp decline with injury problems.

Brett was a feast-or-famine kicker, hitting multiple game winners and breaking franchise records for distance some weeks but missing easy ones in others. Unfortunately, the bad outweighed the good in 2019 and eventually Dallas dumped Maher for Kai Forbath to finish the year.

Since then, Maher has had unsuccessful stops with five different teams. He bounced around practice squads in 2020 and then was competing for a job with the Saints in 2021, but was eventually injured and waived during preseason.

Now, even if it's brief, Brett may get a chance to show his stuff again with the Cowboys.

Maher was with Cowboys in 2018-19. Hajrullahu had two brief stints this August and September.

You can be forgiven if you don't remember Lirim Hajrullahu. He made a brief appearance for Dallas in the 2021 preseason as Zuerlein was working his way back from injury. He also spent a week on the practice squad in September but has since been floating in free agency.

Though he's never kicked in an NFL regular-season game, Hajrullahu is a 31-year-old veteran of the Canadian Football League and has spent some time with the Rams and Panthers before 2021.

While the more interesting story would be a reunion with Brett Maher, it seems more likely that Dallas would go with Lirim Hajrullahu given their most recent exposure. He's also someone that John Fassel is familiar with, as opposed to Maher having played for the previous coaching regime.

This unexpected shakeup at kicker comes at a precarious time for the Cowboys. After a thorough drubbing last week from the Denver Broncos, Dallas is trying to restore order this Sunday against the 4-4 Falcons.

At the very least, Greg Zuerlein hasn't exactly been money so far this year. He's made 14 of 18 field goals for 77.8% overall accuracy, putting him near the bottom of the league overall in this early sample size.

Ideally, the Cowboys will play up to their previously-seen potential and make the kicking game irrelevant. But if their struggles continue against Atlanta, Dallas may be asking a lot of one of these free agents to step up in a critical moment. 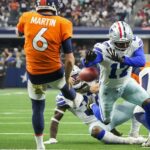 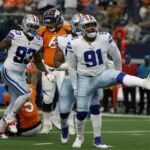