The release of Dez Bryant has opened up a significant pre-draft need at wide receiver for the Dallas Cowboys, who would be relying purely on potential and unproven upside if they had to play a game with their current group of pass catchers tomorrow.

Fortunately for them, the 2018 NFL Draft presents a great opportunity for the Cowboys to improve with young talent at WR. This certainly had a factor in the Cowboys decision to move on from Bryant, and now they must hit on the receiver they seem prepared to take as early as 19th overall.

In our last full week prior to AT&T Stadium and the Cowboys hosting this year's draft, here is a look at my top ten wide receivers available.

Even with Dez Bryant in their plans for 2018, the Cowboys have been linked to this year's consensus WR1 in Alabama's Calvin Ridley for some time now. The fit makes a ton of sense, as Ridley is ready to contribute at the next level right away – something he needs to do as an older prospect (23 years old).

Ridley can play anywhere on the field, winning in a variety of ways to create separation with his lanky and athletic frame. After the catch, Ridley is tough to corral in the open field.

Held back by inconsistent quarterback play at Alabama, the expectation is that a quarterback like Dak Prescott will turn Ridley into a consistent threat in the NFL.

Of all the receivers available in this draft, Maryland's D.J. Moore may be most ready to provide the Cowboys with the play making ability they need out wide.

Getting the ball into the hands of Moore should be no problem for his next team, and this is a player that absolutely knows what to do with it when given the chance. Somewhat of a smaller target, Moore does not shy away from contact in any phase of his game.

Winning with long speed and exceptional quick-twitch in tight spaces, Moore will track the ball downfield for vertical plays or elude defenders on a short pass to spark any offense.

D.J. Moore likely has a better chance of reaching the Cowboys' first pick than Calvin Ridley does. If Dallas is set on drafting a WR at 19th overall, they should be ecstatic at the chance to grab Moore. 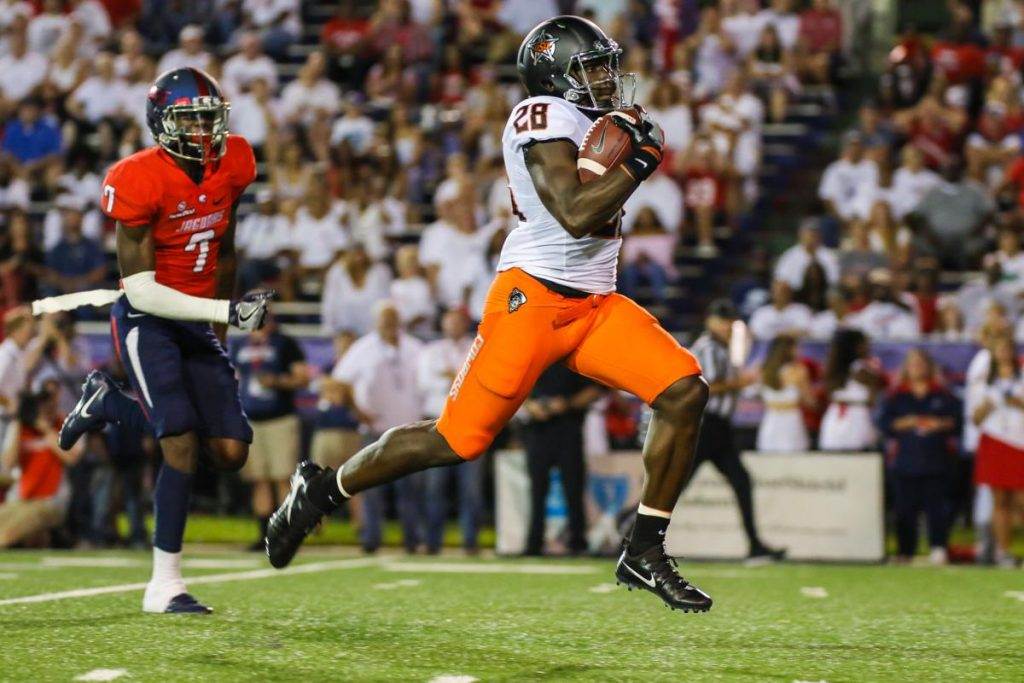 Is another Oklahoma State receiver in the first round exactly what the Dallas Cowboys need?

With James Washington, who was a late 30 visit for the Cowboys, the answer may very well be yes. Washington has been criticized as a prospect because of the league he played in, benefiting from the gaudy numbers that the Big 12 is known for putting up through the air.

Washington still projects as a reliable target in the NFL however, proving at this year's Senior Bowl that he is a nuanced route runner with soft hands. Moving through his routes and taking the top off of defenses comes easy for Washington.

These are both traits that the Cowboys should be in the market for at WR, putting James Washington on their radar as my third ranked player at the position.

Anthony Miller may be the best “bad ball” receiver in this draft, making a name for himself out of Memphis by producing circus catches and improbable plays regularly. The hype for Miller has been transferred to other receivers ever since it was announced that he was dealing with a foot injury leading up to this draft, but Miller's next team is still getting a great football player.

If the Cowboys pass on a WR at 19th overall, Anthony Miller has to be directly in their sites for the 50th overall pick. Miller explodes off of the line of scrimmage to quickly beat the cushion that even the quickest defensive backs give him, separating at full speed to make contested catches.

Miller played all over the field for the Memphis Tigers, meaning the Cowboys could find an ideal spot for him without worrying much about Miller adjusting to the position. 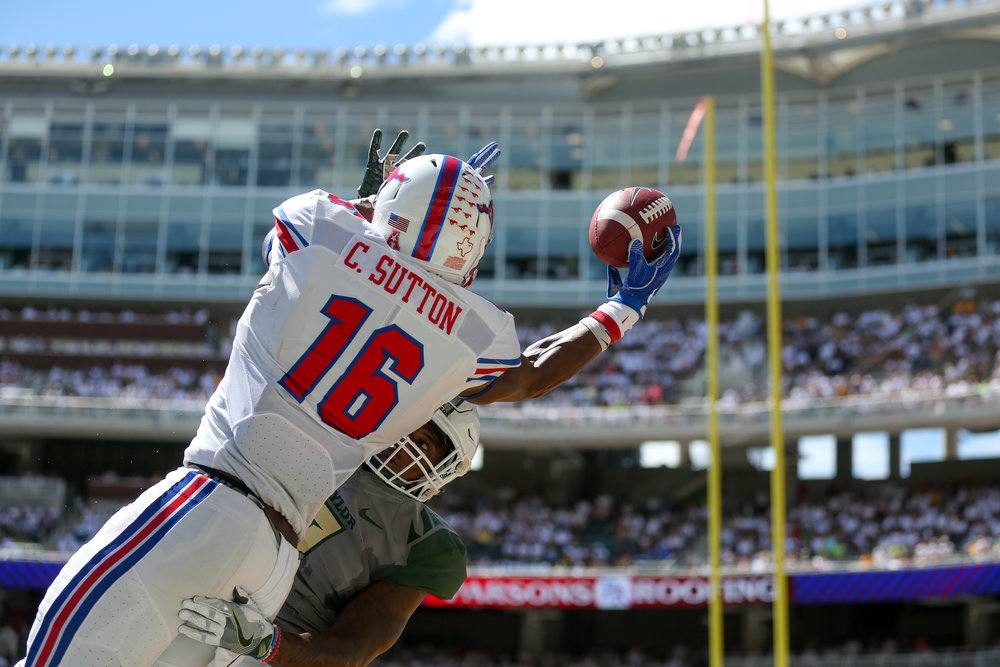 A local prospect for the Cowboys, SMU's Courtland Sutton has been somewhat of a polarizing prospect in this year's WR class. Where some see a slower player that will struggle against the increase in competition level in the NFL, others view Sutton as a match up problem for any defense to handle thanks to his size and leaping ability.

As my fifth rated receiver, I see Sutton as a ready-made contributor at the X-WR position. With not many like him in this draft, Sutton may be in a tough position to grab for the Cowboys if they are not prepared to take him in the first round.

There may be more dynamic players than Sutton at WR in the 2018 Draft, but this is a player with physical traits and an overall ability to impact the game as a receiver and blocker that cannot be ignored.

Like Sutton, Kirk's value as a receiver at the next level has come into question – this time due to his size. Using his acceleration and burst to separate is not a problem for Kirk, who was a productive player for Texas A&M as both an outside and slot target.

I believe that Christian Kirk projects best as a slot receiver in the NFL, but this is not to say that he won't earn snaps on the boundary. If the Cowboys believe he can do both effectively, Kirk could be the long threat that they've missed over recent seasons as a “home run hitter” that is perfectly Dak-friendly.

This is one of the most underrated players in the 2018 NFL Draft, with the chance to instantly outplay his draft position in year one. Notre Dame's Equanimeous St. Brown is an all-around skilled athlete with 13 career touchdowns for the Fighting Irish.

St. Brown is primed to take the league by storm in 2018 and well beyond, an absolute glider of a receiver with reliable hands and pro-ready size.

If “EQ” St. Brown is a prototypical receiver for his next team to take full advantage of, the same goes for the physical specimen that is Auden Tate – although the Florida State product lacks the same refinement.

Tate projects best as a red zone target, but does find enough ways to use his build to create separation for contested catches.

This is likely the type of receiver the Cowboys are looking to pass on for more “twitched up” targets with polish to their route running, but Tate is still deserving of his top ten status here at eighth overall.

The latest burner WR out of the Pac 12 is Washington's Dante Pettis, one of the best “Swiss Army Knife” prospects available for teams in need of a receiver and punt returner.

When Pettis is given space to work with, he is free to fly as an elite speed target that will track the ball through open areas. Lacking the build to make up for disruptions in his routes, Pettis will get pushed around some in the NFL.

A number of Pettis' touches will have to be scripted into his new offense, but there is enough to like about Pettis as a fluid receiver with experience both inside and out to land him in the second round.

Another recent pre-draft visitor of the Dallas Cowboys, LSU's D.J. Chark is an intriguing prospect to figure out. A late-bloomer when it comes to production in college, Chark put down a 4.34 second 40-yard dash at the Scouting Combine. Doing so on the heels of a standout Senior Bowl week earlier in this draft process, the LSU receiver has done plenty to stand out to this point.

Chark is at his best when running dead straight, and there are immediate issues with his game when asked to do much else (besides return punts). It's clear on Chark's tape that he doesn't play with a great understanding of his own body, struggling to set up defenders at the line of scrimmage despite his length and quickness.

Chark also allows too many defenders to beat him to the catch point and take away receptions. Steady coaching against increased competition should only help D.J. Chark though, who will always be good for shot plays made easy as an NFL target.

The Dallas Cowboys have their work cut out for them in rebuilding their receiving corps on the fly, but also have plenty of options in next week's draft to add rookie talent. As you'll notice in my round grades through the top ten, all of the players above are graded in the first two rounds (where the Cowboys hold the 19th and 50th overall pick).

The type of receiver the Cowboys target will say a lot about the direction this offense is going, with Calvin Ridley and Courtland Sutton projecting as the best ‘X' players available.

Overall, the Cowboys should feel good about letting the board come to them as always in the first round – waiting until day two to land a receiver that will still fit Dak Prescott's offense nicely.

Ideally, we trade back, say with New England at 31, and pick up and extra 2nd plus whatever else, and get Moore at 31. Use the extra picks to move up in the 2nd for whichever LB falls