Could a Cowboys Win VS Seahawks Spark an Earl Thomas Trade?

As we enter week 3 of the 2018 regular season, we might be entering the next important date in the Earl Thomas conversation. It's been such a wild narrative ever since the Seattle Seahawks' safety asked Dallas Cowboys Head Coach Jason Garrett to “come get him” and the end of this talk is not close. The trade deadline won't come until October 30th. Only then will we be able to put this conversation aside until the 2019 Free Agency arrives.

After all that's happened, including the Cowboys offering a second round draft pick for Thomas, it may come off as optimistic to expect Thomas will wear the Star in 2018. However, when the Dallas Cowboys visit Seattle today, a victory on the road could spark the trade we've been discussing since December.

The #Cowboys and #Seahawks haven’t spoken about Earl Thomas since before he return. Some in the Cowboys organization hope to restart talks today. Seattle would have to be blown away to even consider it. https://t.co/dhbSNPeiiF

Ian Rapoport reported today that trade talks ended between both teams after Thomas returned to the team just before the season began. The Cowboys, according to the NFL Network reporter, “hope to restart talks today.”

It only makes sense, right?

The Seattle Seahawks are not re-signing the All-Pro safety. It's not happening. Thomas is clearly unhappy with the situation and hasn't been afraid to show it in social media. Shortly after returning to the Seahawks, he went as far as posting that “the disrespect has been well noted and will not be forgotten.”

If the Seahawks lose today against the Dallas Cowboys, they'd be 0-3 in a division where the Los Angeles Rams and San Francisco 49ers are the favorites. It'd be really difficult to bounce back into the  playoffs if they open their year with three straight losses. Even more with a very bad offensive line.

If their season comes to a point where all seems lost, why keep Earl Thomas? Why would they wait until free agency next year to let him go instead of getting compensation now? The Dallas Cowboys have already offered them a second round pick earlier this month, according  to reports from ESPN's Adam Schefter. It'd be very hard to understand if they open their season with three losses and still refuse to trade him for a second rounder, considering they don't want to give Thomas an extension. 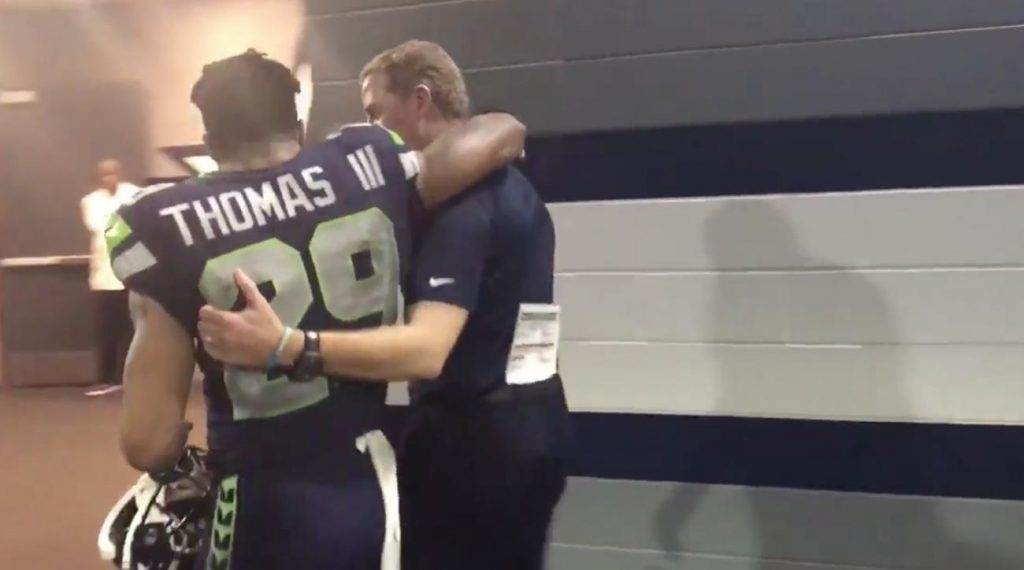 The Cowboys and the Seahawks' front offices will be in the same building today, making this even more intriguing. The Seahawks will have the Cowboys out of their way, meaning they wouldn't face their All-Pro safety if they trade him after today's game. This is without a doubt a very important chapter in the Earl Thomas' trade discussion.

So far, the Dallas Cowboys defense has looked legit, ranking as the NFL's third best in points allowed. However, the team is familiar with losing in key moments against elite quarterbacks. Thomas could take this unit to the next level, and put the defense in a very good position to lead the Cowboys to the playoffs and beyond.

For now, Thomas will wear a Seahawks uniform and play against the team in which he might eventually end up. As if the game that's going to be played on the field wasn't enough action, Cowboys Nation will be wondering what's being talked about by both front offices inside CenturyLink Field.

Mauricio Rodriguezhttps://www.facebook.com/PrimeroCowboys/
I love to write, I love football and I love the Dallas Cowboys. I've been rooting for America's team all the way from Mexico ever since I can remember. If you want to talk football, I'm in... You'll find me at @MauNFL.
Previous article
Cowboys, Seahawks Week 3 Injury Report
Next article
Could Cowboys DT Datone Jones Earn Starting Role with Maliek Collins Out?

Please trade for a QB instead.