Cowboys Nation was on the edge of their seats on Tuesday afternoon, waiting to see if the Dallas Cowboys would execute a trade for New York Jets safety Jamal Adams.

A deal seemed to be getting closer by the minute, but ultimately it fell apart. Reportedly the Jets were looking for a “Jalen Ramsey type” haul in return for Adams, a price the Cowboys simply weren't willing to match.

Sources said the Cowboys were willing to part w/ a 1st and either a 4th or 5th round pick to acquire S Jamal Adams. Can confirm the Jets sought a pair of 2nd round picks in addition to a 1st, as @nflnetwork reported.

Reportedly, the Cowboys were willing to give up premium draft picks, but nothing close to what the Jets felt they needed in return. Dallas was willing to trade a first round pick and an early day three pick, but the Jets were looking for more top 50-60 selections.

So, the Cowboys pass on a chance to send away serious draft capital in order to attain the elite safety which has eluded them in recent years.

What do they do know?

For the time being, they play with what they have. Of course free safety Xavier Woods has been improving by the week, but the spot opposite of him has been a much bigger question mark. Jeff Heath has become somewhat of a liability against the pass, something Jamal Adams certainly would not be if he were to end up in Dallas.

What the Cowboys can do, however, is revisit this Jamal Adams deal in the offseason. The stud safety seems to be unhappy with his current situation with the Jets, firing off some not-so-cryptic tweets which indicated his frustrations Tuesday evening.

At the end of the week last week, I sat down with the GM and Coach Gase and told them I want to be here in New York. I was told yesterday by my agent that the GM then went behind my back and shopped me around to teams, even after I asked him to keep me here! Crazy business.

According to Adams, he spoke with both Jets head coach Adam Gase and general manager Joe Douglas prior to the trade deadline to express his interest in sticking with the team. He now feels like that trust has been violated, as the Jets were listening to offers which included him as the main acquisition.

Whether or not Jamal Adams should feel this way is up for debate, but the fact is he's not exactly ecstatic to be a New York Jet at the moment. The team is 1-6 (thanks to the Cowboys), he's been openly included in trade rumors he wanted no part of, and did I mention the team is really bad?

Adams is the type of talent who could force his way out of a situation, similar to what we saw from Jalen Ramsey just a few weeks ago. Will he do so is a different question, but he could certainly create a “Cowboys or bust” atmosphere this offseason if he wished.

From the Cowboys standpoint, the current price tag tied to Jamal Adams is too steep. And that's understandable. But let's say we get to the Combine next year and the Cowboys don't love any of the safety prospects, nor any of the bargains they can find in free agency. They decide they need to add talent on the back-end of their defense, and have already been involved in these kinds of conversations with the Jets.

Then, maybe, Jamal Adams finds himself with a star on his helmet much earlier than anyone could expect at this moment.

It's also possible that the price tag for Adams could change. The Jets could very well have a new coaching staff come the offseason, and could be looking to completely unload and rebuild with a new regime.

My gut feeling, though, is that this'll be another Earl Thomas situation.

A whole lotta smoke, but not any fire. 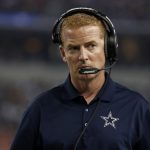 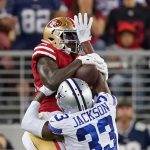