Our 2022 position previews continue with the most important of all; quarterbacks. While the Cowboys are set up top with Dak Prescott, an intriguing battle could be coming for the backup job in this year's training camp.

Prescott returns hoping to build on his successful comeback in 2021 from a major leg injury. His one missed game last year against the Vikings was unrelated and an anomaly in an otherwise healthy and productive season.

In a way, that Minnesota game was a blessing in that it finally gave us our first real look at Cooper Rush as the backup. Rush stepped up with 325 passing yards and two touchdowns, including the game-winner to Amari Cooper, and validated the many years of trust Dallas has placed in him.

Whether it's renewed confidence in Prescott or new confidence in Rush, the Cowboys' QB position is in a stable place heading into next season.

Of course, there will always be criticism and doubts about Dak's ability to be a Super Bowl-winning quarterback until he actually gets the job done. But those same comments existed about Matt Stafford before 2021, or even Aaron Rodgers or Peyton Manning before they finally reached the mountaintop.

The key right now is just to be competitive enough to get back to the tournament. Prescott is clearly the top QB in the NFC East and gives Dallas that opportunity every year until that changes.

The QB position has relative certainty going into 2022 compared to other spots on the roster. Prescott is the starter, Rush is QB2, and Grier and DiNucci are fighting just to make the team.

Jason Garrett's Cowboys would often keep just two quarterbacks on the 53 to save a spot for some other position. While Mike McCarthy was more prone to keeping three passers on his old Packers' rosters, the current rules with the practice squad make it much easier to stash your third QB there and still have him available for games.

Ultimately, the decision to keep a third QB will come down to how much Dallas wants to protect that player from being poached by another team. Do they see him as an asset they can't afford to lose, especially given it costs them a spot elsewhere on the roster?

We'll dive deeper into the potential battle between Rush and Grier for the backup job in a minute. It's interesting to note that Grier, a 3rd-round pick by Carolina in 2019, has the highest draft pedigree of any QB on the team. Now in his fourth season and first full offseason in Dallas, could his perceived talent finally come to the surface?

Ben DiNucci feels like an afterthought in these talks but is still hanging around for a third season. He's been too harshly judged for that disastrous Eagles game in 2020, a bad spot for any rookie to be placed in, and now has much more time and development under his belt. 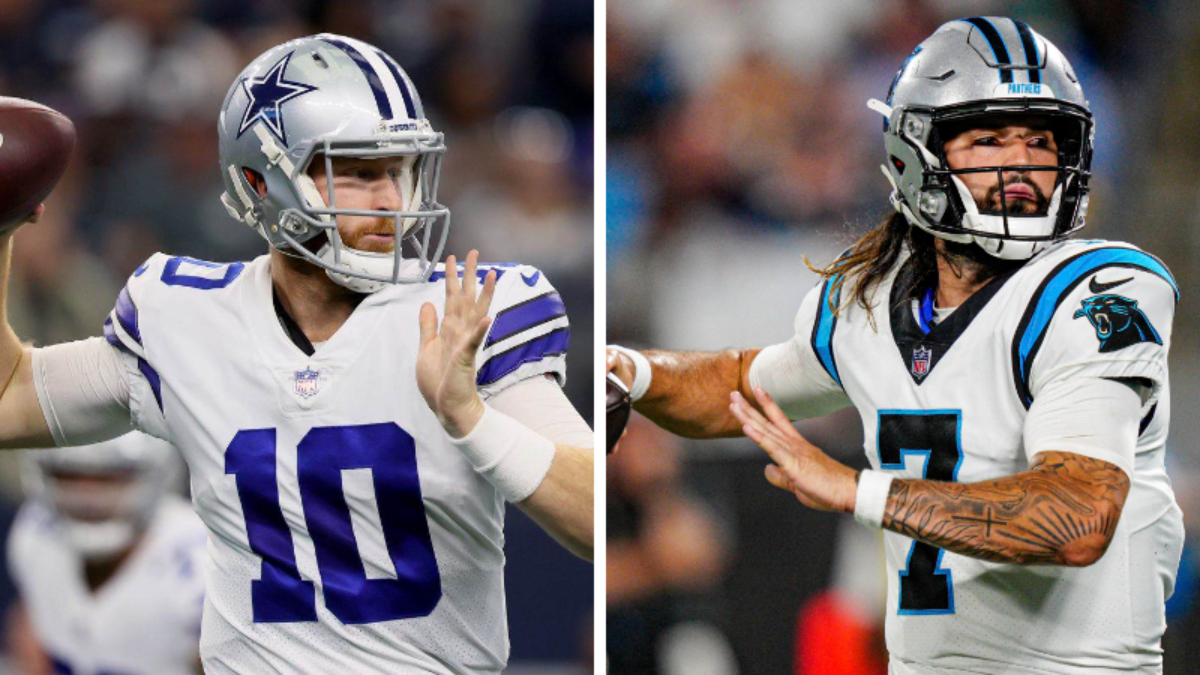 Cooper Rush vs. Will Grier

Will there even be a competition for QB2? That remains to be seen, but it stands to reason that someone on the Cowboys' staff is invested in seeing what Will Grier can do to challenge Cooper Rush for the role.

Grier was claimed off waivers last year during final cuts. Despite having not spent any time in camp or preseason with Dallas, Will was immediately made QB3 and protected with a spot on the 53-man roster throughout 2021.

Again, Grier entered the NFL with enough perceived potential that Carolina made him a 3rd-round pick. It doesn't mean everything in the grand scheme but at least speaks to what some scouts felt about Will only a few years ago.

Obviously, someone in Dallas shared their views. Now Grier will get his first true opportunity to show what he can do and compete with Rush after a full offseason with the team.

Rush's extra two years in the NFL, nearly all of which have been with the Cowboys, will certainly give him an edge. He's been in Dallas almost as long as Dak Prescott and the two have a longstanding relationship working together on game prep and game-day execution. That won't be easy for Grier to overcome.

But in the end, the primary function of the backup QB is to be ready to step up and keep the team competitive if the starter goes down. If Grier can prove in this year's camp that he's the better pure passer and on-field decision-maker over Rush, tenure will quickly go out the window.

Jess Haynie
Cowboys fan since 1992, blogger since 2011. Bringing you the objectivity of an outside perspective with the passion of a die-hard fan. I love to talk to my readers, so please comment on any article and I'll be sure to respond!
Previous article
Why Darren Woodson Should Receive a Long-Overdue Hall of Fame Induction
Next article
Cowboys Hold Workout for Former Longhorns LB Malik Jefferson

Cowboy’s fans are always talking about Prescott is not the right fit for them to win a championship What will they be today without him? They will be losers. What quarterback today, that is not on another team’s roster, will lead them to a championship? This is a team sport, and you will need a good quarterback, great offensive and defensive lines to lead the team to greatness. Back to Prescott, the Boy’s need to start looking for his replacement and develop that quarterback right now. Don’t wait until his contract expire, too late. Looking forward, what do you think the Boy’s will look like when Prescott is long gone? Losers. Take a look around the NFL, more than half of the lead need a superbowl quarterback. Prescott is not great he is a good quarterback. He needs a great supporting cast around him and he does not have that, running game, gone, offensive line, gone, great receivers, gone, defensive line, gone, cornerbacks, gone, and last but not least, great coaching.