Cowboys Elite Defense to be Tested vs RB Chris Carson

The Dallas Cowboys head into the playoffs with one of the top defenses in the NFL. Allowing only 20 points per game, it was the defense that led this team to the NFC East title. Their recipe for success has consisted in controlling the time of possession with a strong running game and keeping opponent's offenses off the field.

This Saturday, they'll be hosting the Seattle Seahawks. Coming in as the first NFC Wildcard, the Seahawks are 10-6 and count with a pretty good running game. In fact, while Ezekiel Elliott took home the 2018 rushing title, the Seahawks managed to get the team rushing title. As a team, they average 160 yards on the ground per game.

In the regular season, only three running backs were able to run for more than 100 yards against this defense. One was Saquon Barkley on an intense regular season finale, another was Marlon Mack when the Indianapolis Colts shutout the Cowboys 23-0.

The third one is Seahawks' RB Chris Carson, who will be lined up on the other side of the ball this Saturday. 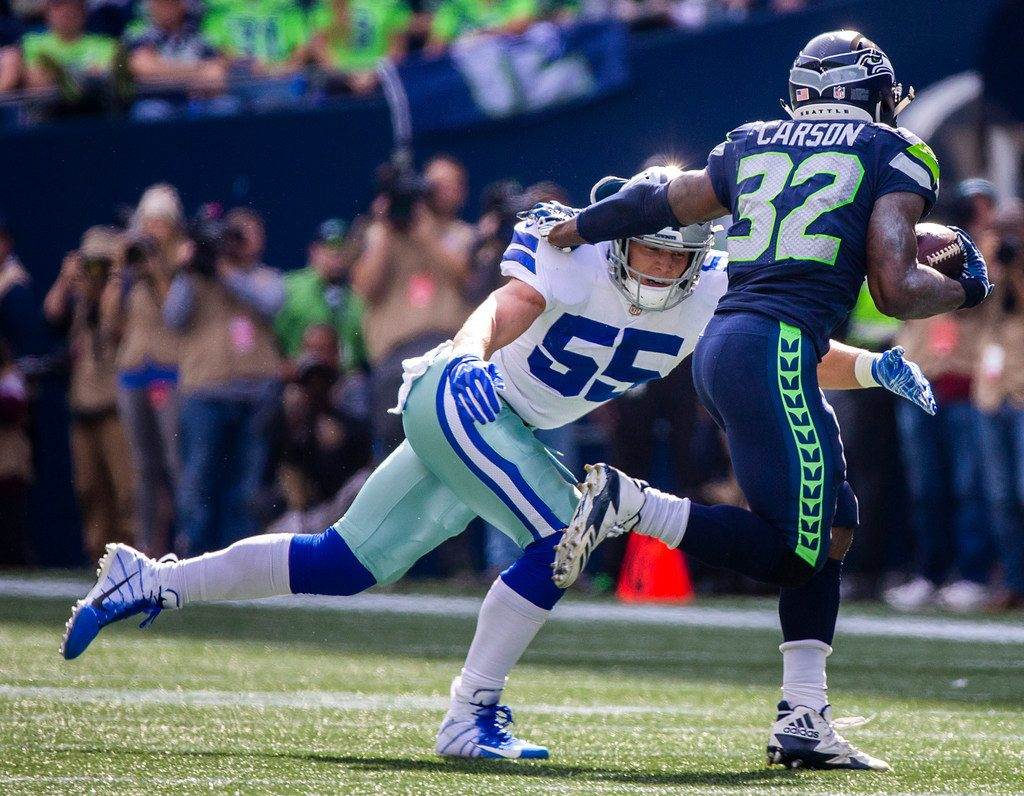 Chris Carson ran the ball 32 times versus the Cowboys in week 3 when the Seahawks beat the Cowboys 24-13. Carson racked up 102 yards and one touchdown. He's been averaging 82 yards per game and has become one of the most important players for the Seahawks offensively.

The Dallas Cowboys defense is not the same as it was in week 3, though. Since then, Leighton Vander Esch and Jaylon Smith have considerably improved as well as the team's defensive line. Antwaun Woods and Maliek Collins have had quality play in the middle of the trenches and with the Seahawks dealing with some injuries along their OL, it seems like the Cowboys' front seven will have an edge on Saturday. Not to mention, they'll be playing at home and Cowboys Nation will be loud.

The defense has a big challenge in front of them, considering two of the 100-yard runners they've allowed faced the Cowboys during the last three weeks of the season. I'm certain Carson will find success on the ground, but this game will be about not letting the Seahawks' running game win the match.

However, I believe this is a battle that will have to be won by Ezekiel Elliott and company. The Cowboys have turned their season around in big part thanks to defense, but it's also been the fact of controlling the time of possession. Even as a flawed offense in terms of red zone efficiency, keeping opposing offenses off the field has gone a long way in the Cowboys' 7-1 streak.

Elliott is by far the best running back on both teams and has put up numbers that have gotten him a spot in the MVP discussion (even though he's not going to get it). He is likely to outplay Chris Carson, but he won't be able to do it alone.

When push comes to shove, who is able to run the ball better will be the key of the game this Saturday in Arlington. It's a close one, but I'll take the Cowboys under that criteria, specially with the way the passing game has improved as of late.

Mauricio Rodriguezhttps://www.facebook.com/PrimeroCowboys/
I love to write, I love football and I love the Dallas Cowboys. I've been rooting for America's team all the way from Mexico ever since I can remember. If you want to talk football, I'm in... You'll find me at @MauNFL.
Previous article
Cowboys Quarterback Dak Prescott Hot Heading into the Playoffs
Next article
Cowboys/Seahawks Has Become A Quiet NFL Rivalry