We should've seen this coming.

The 2020 Dallas Cowboys will be remembered for a few things, but you have to start with injuries when telling their story. Beginning with La'el Collins before the team even played a meaningful snap, and continuing on through Tyron Smith, Blake Jarwin, Zack Martin, and Dak Prescott, this season will be forever tainted by what may have been. If not for catastrophic injury, of course.

This team has faced a few critical moments this season, beginning with when Prescott went down against the Giants. That night, they found a way to rally behind Andy Dalton and steal their second victory of the season. They gave fans a small glimmer of hope that maybe, surrounded by high caliber skill talent, Dalton could play well enough to keep the team afloat.

Their next critical moment came in Philadelphia. Though the season already felt over, a loss to the division leading Eagles should've put a nail in the Cowboys' coffin. They started undrafted rookie Ben DiNucci, and despite the Eagles' best efforts, they lost by multiple possessions.

It should have been over there. But because of the ineptitude of their division mates, Thursday marked yet another season defining game.

And, once again, the Cowboys failed this test.

Three point home favorites, the Cowboys suddenly had an energy about them after going to Minnesota and upsetting the streaking Vikings. Any sane person knew that this wasn't a true contender in the NFC, but given their strength of schedule it felt like the Cowboys could legitimately steal the division at 7-9.

It had to start against Washington, though. It had to happen at home, in front of the entire country watching on Thanksgiving Day. Instead this Cowboys team looked completely overmatched for much of the afternoon, inept on offense and broken down on defense in the fourth quarter. 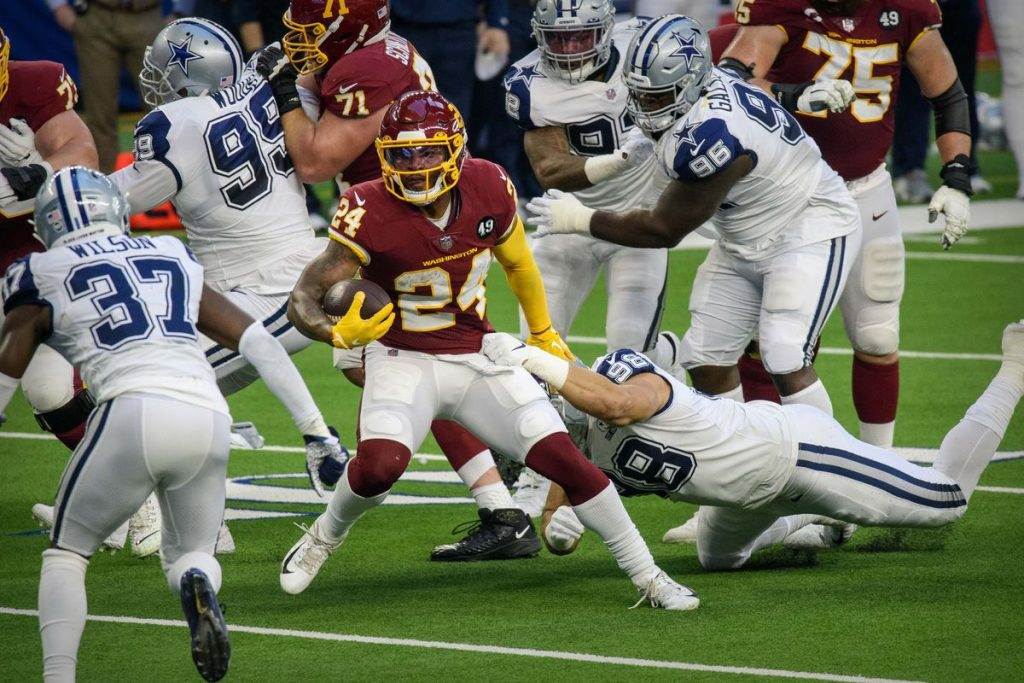 I'm not going to go hard on the coaches, though of course their aggressiveness failed them against Washington. Mike McCarthy and his staff know what they're working with both at quarterback and on the offensive line. They know they have to manufacture some juice to keep possessions going. It worked against the Vikings, but it didn't work yesterday. And that's the story.

This team should look a whole lot different next season. In a perfect world their three stud offensive linemen would return, Dak Prescott would sign a lengthy extension, and they'd be right back in the driver's seat in the NFC East.

But there's a lot of questions to be answered over the next few months before we can begin to feel confident about 2021. Because 2020…was about as bad as it could get.

Kevin Bradyhttps://kevinrobertbrady.wordpress.com
Die-hard Cowboys fan from the Northeast, so you know I am here to defend the 'boys whenever necessary. Began writing for a WordPress Cowboys Blog, and have been with ITS since 2016.
Previous article
RB Antonio Gibson Carves up Dallas Cowboys Defense on Thanksgiving
Next article
Randy Gregory Eats on Thanksgiving vs Washington

No.
The COACHES failed the players and McCarthy stupid risk taking killed the team. McCarthy was doing stupid things from game 1. Remember not kicking the tying field goal against Rams? No. All season, McCarthy has called foolish,high risk, low reward plays that killed momentum and lost games.
And , Nolan has insisted all season on playing his defense linemen standing where they get blown off the line.
The NFL is a coaches league. Every team has injuries and holes in the lineup but when you have ridiculous coaches, you lose every time.

MM will “clean house” and play next year with “his guys ”Can’t win with these guys. Just keep some warriors and shed the prima donnas.

It’s hard to win any games at all when the team is losing all of their players!! I think we were doing just fine until we lost Martin and Erving!! I think with those injuries we ended up putting in our 6th or 7th different offensive line for the season and there’s no team that can overcome that!! As far as winning the division…. Unfortunately we still have a chance to win the division!! We have the 2nd easiest schedule in the NFL, and our division foes have some of the hardest schedules left!! I’d prefer to get as high of a draft pick as possible and just start over next season when our offensive line is healthy and we can draft some of the best players in the draft for our defense, but we all know that Jerry won’t give up like that and he’d rather win the division and lose in the 1st round of the playoffs than to admit his team is terrible and call it quits!! But we still have 5 games left, so I guess we’ll see what happens!!

Kevin, why did you categorize the Giant game win where Prescott got injured and Dalton replaced him, as a “STEAL”. As I remember, Dalton made two great passes along with two great catches by the WRs (at least one by Gallup, maybe both) to put us in FG position and the FG was made for the win.

HOW EXACTLY IS THAT A “STEAL”? IMO, it seems to me and its pretty obvious, that this it is just a discrediting of our back-up QBs, whomever that may be. We can’t win without Prescott, is the inferred message, and if we do, IT IS A “STEAL”.

Exactly how many wins did Prescott lead us to, with all that “high caliber skill talent”, before getting injured? That would be ONE. That gifted wrapped and handed to us win, from an unprepared Falcon team, that just had to fall on an onside kick that was rolling around on the turf, to give us another L.

Prescott and his ridiculous contract demands, cost us good defensive players, DT M Collins, DE R Quinn, CB B Jones, S Jeff Health. Right about now, our defense could really use these players. IMHO, Prescott has been more of a problem, than a solution. ONE POSTEASON WIN IN FIVE YEARS, just does not cut the mustard in my book. Time to trade Prescott, get as many draft picks as possible, draft a QB, and start the REBUILD..

“I’m not going to go hard on the coaches” your kidding right?
This is the most talented bunch of players (notwithstanding injuries) the cowboys have had in a long time, good stretch of drafts lately too – of course it comes down to POOR COACHING! From the top down. Garrett had to go (and should have years ago) but his teams never looked like the keystone cops on the field.

The 4th down punt call (from their own 24 on a 4th and 10 with 12 minutes left on a 4 point game!!) was just the the pinnacle of a poorly coached game. How about 1st/2nd down after Jaylon’s int from the 4 yard line? How about 4th and inches and then throwing to a tightly covered rookie Lamb just to escape the pass rush?

This team is a mess. Not sure what their options are moving forward but have seriously reconsidered their “coaches” and “coaching decisions” week after week.

VAM- All due respect It’s a foregone conclusion we disagree on the worth of Dak to this team. I think he was just approaching an age where most QBs enter their prime, and it’s unfair to judge him on what he was the last 4 yrs I look at his maturation and what he can/has evolved into and the QB he is today as well as what he can become. But I’m not and never have been completely opposed to moving on from Dak, nor am I opposed to resigning him. I’m interested in what’s best for the team, as I’m guessing most of us are.

The only trade scenario Dallas would be open to would require the trading team to compensate us with (2) 1st rd draft picks. Possible but not very likely. Its also highly likely we miss out on Lawrence/Fields. So that leaves us with maybe reaching for Wilson (if we’re even in position to do to draft him). Going the FA QB route takes away a chunk of the Dak money people wanna rebuild the defense with, and what QB would that be? It’s a QBs league and all the contenders have a good one.

In closing I guess I would say sure we should consider all options, including moving on from Dak, but we can’t just move on from him and worry about a QB later, We have to have a coherent plan moving forward with several options/scenarios on the table. I understand the contract implications, but i dont buy the fact that we can win with just any QB. Very few teams are gonna win with an avg QB no matter what the rest of the team looks like.

Hey Gary b, I want what is best for our team also. I’m just not as confident as you that DP can get us to that next level. And to be frank, I wonder if the Jones are confident enough. Of course time will tell if he signs.