The Dallas Cowboys return home for the first time since Thanksgiving in Week 16 with their eyes set on wrapping up the NFC East crown. When they take the field, however, they'll be down one of their most important offensive players.

Left Tackle Tyron Smith has been battling a nagging ankle injury since Week 6, and recently missed the Cowboys' 21-6 victory against the New York Giants. On Sunday, Smith will miss his fifth game of the season against the Washington Football Team.

There was some optimism that Smith could give it a go after showing improvement during the week, but the eight-time Pro Bowler will get more time to heal his ankle and be ready for the last few games of the season before the Cowboys begin their playoff run.

This means that swing tackle Terence Steele will likely get his second consecutive start in relief of Smith. Steele has shown improvement since last season, and although he's nowhere close to Smith, he provides a solid substitute at one of the most important positions in the NFL.

Smith, when he's healthy, is still a dominant force at left tackle and arguably the best at the position even in his 11th season. He vowed to have his first full campaign since 2015, but unfortunately, Smith's multiple stints on the injury report in 2021 have come at the hands of his teammates falling on his ankle from behind.

The Cowboys are taking the big picture approach here with Smith knowing that he'll be vital in their pursuit of the franchise's sixth Super Bowl title.

With us playing the no name WFT we should mash them without TS and give him more time to heal up! Hopefully we will remember the last time we played them and this time keep our foot on the gas till the horn sounds!!

I think it’s a good idea to keep resting him, we’ve already clinched a playoff spot, so there’s no need in rushing him back and taking the chance on injuring him even more!! It would be nice if we could get the number 1 seed, but I think it’s just as important if not more important to have our best players ready for the playoffs than to have the number 1 seed!! But with that being said, I can’t believe that Tyron Smith finally got his back and neck problems taken care of just for his teammates to hurt him in another area!! I thought for sure he would be able to play a full season without having to deal with those injuries again….. Which I guess technically I was right since he was always missing games cause of his back and neck, and now he’s only missing games cause his teammates fell on his ankle!! It’s not as bad of an injury as his back and neck injuries were, so that’s a plus!! But as long as he makes it back for the playoffs we should be fine!! Hopefully he makes it back for the cardinals game, we could really use him for that game…. That game will have major implications on playoff seeding, so we need to win that game!! But there’s no need in rushing him back since we’re already in the playoffs!! I guess only time will tell on how things fall for us!! 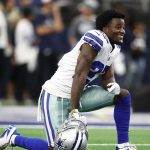 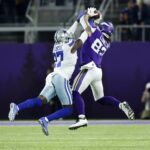