This statement has often been used to criticize the Dallas Cowboys' decision making over the last few years. Whether going after Jason Garrett for punting the ball, the defense for not bringing enough pressure, or Dallas failing to re-insert Tony Romo midway through 2016, certain segments of the fan base have wanted Dallas to be “bolder” in their choices time and time again.

But, when they do make calculated risks and act in a bold way, we should praise them just as much as we criticize the opposite behavior.

If there's been one consistent thing about the Cowboys over the last decade of football, it has been that they hit on their first round draft pick. Ezekiel Elliott, Tyron Smith, Travis Frederick, Zack Martin, the list goes on and on. When Dallas makes a pick in the first round, it's going to result in a Pro Bowler more often than not.

And the fact I can make that statement is flat-out ridiculous.

The Cowboys have had much less immediate success on day two, however, often using their second round picks to take those bold risks.

Back in 2014 they used their second selection on DeMarcus Lawrence, an edge prospect from a relatively small school who would deal with back issues and suspensions early in his career. In 2015 they gambled on Randy Gregory, another defensive end, this time with what seemed to be a mental health and addiction issue.

In 2016 they once again gambled, drafting linebacker Jaylon Smith, who had just suffered one of the more gruesome on-field injuries in recent history. It wasn't even clear if Smith would ever be able to play football again, but Dallas used their early second round pick on him. 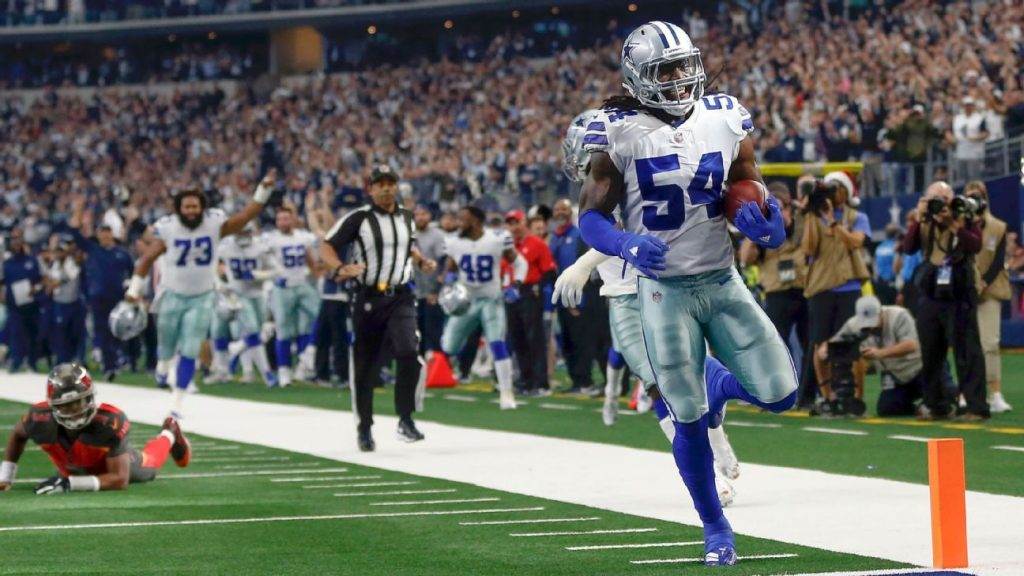 Still a very close game in the early going, the Cowboys lined up for a critical third down. Jameis Winston scrambled out to his right and looked downfield. Not feeling the pressure behind him, Winston got rocked by Randy Gregory and the ball popped out. Who was there to recover and return it for a touchdown? None other than Jaylon Smith. The incredibly healthy Jaylon Smith.

This felt like a massive moment for the young Dallas Cowboys.

These players, often doubted from both the outside and inside, are putting it all together. Randy Gregory not only leads the team in sacks since returning from injury a few weeks ago, but has become a consistent threat as a pass rusher off the edge. Jaylon Smith is becoming one of the best young middle linebackers in all of football, and a clear leader on the prolific Cowboys defense.

The Cowboys showed patience and trust in these players, and they are returning it back in fantastic ways on the field. This defense is young, athletic, and promising. They are blossoming before our eyes and becoming one of the best units in the league.

It's unlikely that Dallas will make a long playoff run this year, but if they do, it will likely be on the backs off these second round risks.

Kevin Bradyhttps://kevinrobertbrady.wordpress.com
Die-hard Cowboys fan from the Northeast, so you know I am here to defend the 'boys whenever necessary. Began writing for a WordPress Cowboys Blog, and have been with ITS since 2016.
Previous article
Next Day Rant: The Cowboys Made the Playoffs. Enjoy It!
Next article
What did the Dallas Cowboys Receive for Christmas in 2018?

On Wednesday night, the NFL announced 2023 Pro Bowl selections, and seven Dallas Cowboys were on the list. https://twitter.com/dallascowboys/status/1605732163319496704 Among the seven players selected are four...
Cowboys News

The Pro Bowl has become an afterthought recently, but that still shouldn't take away the fact that both Micah Parsons and Zack Martin are...