Now, as the 2020 season approaches, the Cowboys have a few decisions to make at receiver with several unrestricted free agents. Cooper will be the team's top priority once Dak Prescott's deal is done, and the anticipation is he won't be let out of the building.

Cobb signed a one-year deal worth five million last offseason and wouldn't require much financial commitment to be retained. His history with new Head Coach Mike McCarthy, going back to their days in Green Bay, makes him one of the top candidates to return next year.

Tavon Austin is also set to hit the open market, and with very little impact since he arrived in Dallas in 2018, he's probably seen his last days with a star on his helmet.

That leads to an opportunity for the Cowboys to upgrade the wide receiver position in April's NFL Draft. With a deep class entering the league, we could see a plethora of them selected in the first round. There's one receiver in this class, however, that could be there for the taking in round two and have an instant impact for the Cowboys, and that's Arizona State's Brandon Aiyuk.

He started his collegiate career at Sierra College in 2016. As a freshman, he registered 29 receptions for 573 yards and five touchdowns while also being named to the All-Big 8 team. A year later, he would be selected as a Junior College All-American as he racked up 60 receptions for 960 yards and 14 touchdowns in addition to over 700 total kick return yards.

This led to Aiyuk transferring to Arizona State for his final two years of eligibility. He chose the Sun Devils over other offers from Colorado State, Kansas, Tennessee, and Alabama because they saw him as a receiver and not just a return specialist. In 2018, he would total 33 receptions for 474 yards and three touchdowns while also adding 406 return yards. 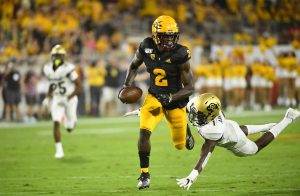 He would be named third-team preseason All-Pac-12 heading into his senior year, and he didn't disappoint. Aiyuk finished with 65 receptions for 1,192 yards and eight touchdowns. Also, he totaled 672 return yards and added an additional trip across the goal line. He would be named first-team All-Pac-12 for his efforts.

Aiyuk is an interesting prospect for several reasons. At 6'1 205 pounds, he has all the physical measurables you want. He not only has the ability to play outside but you can slide him inside as well. This would give the Cowboys the opportunity to move Cooper and Gallup around more and not let the team's key in on them because they'll have to pay so much attention to Aiyuk. His speed makes him a deep threat which will also make it hard to swing coverage to Cooper or Gallup. Finally, as mentioned earlier, being a return specialist is also in his tool bag, which could fill the void the aforementioned Austin has failed to since he's been on the roster.

With Prescott headed for a lucrative payday, you want to provide him with as many weapons as possible. Cooper is a top 10 receiver, Gallup is one of brightest young stars as the position, and Cobb, if he returns, is one of the league's best slot options. Adding another piece like Aiyuk would really make the Cowboys passing attack extremely difficult to stop, and make a life for All-Pro Ezekiel Elliott even easier.

Of course, this all depends on if Aiyuk makes it to the Cowboys on day two. Alabama's Jerry Jeudy and Henry Ruggs III are expected to hear their names called in the first round. Also, Oklahoma's CeeDee Lamb and Clemson's Tee Higgins will be off the board early. This makes it more of a possibility that Aiyuk will be available in the second round, and if he is, the Cowboys should turn in his draft card, expeditiously.

Young man, Cooper will be back, as well as Cobb. With Devin Smith and Noah Brown making up the OSU connection, this leaves M. Gallup in the mix. You have Cedrick Wilson and JonVea Johnson in the mix. Why waste a draft pick on the glamour position? The defense needs to be concentrated on fully. If anything they should devote one pick to the tight end position. You are a good writer please stop letting the status quo influence what you know to be true.

I appreciate your comment but you’re way off base here. I write what I write based on what I think and nothing else. How is drafting a receiver to give your quarterback another weapon in round two a wasted pick when you address defense in round one and can do so again in round 3? That makes no sense. Plus there’s no guarantee Cobb will be back. Also, I wrote that Cooper would be back so don’t get why you even brought that up. Be blessed though

You mentioned that D. Smith (Alabama) would have his name called in the first round. I can only assume you meant in the 2021 draft, since he returned for his senior season. Gotta keep those facts straight.

You are welcome to write what you think but it would be BEYOND dumb for Dallas to take a WR when it’s DBs and DLs they need to win in the playoffs. Plenty of quality WRs or TEs will be available but neither are priorities for 2020/2021.

Ramp up time for WRs or TEs is 2-3 years. Dallas needs players to help them win now.

Dallas has way more than enough wide receivers on the team to be wasting a early round pick on another one!! We have way too many needs on defense to be wasting any early picks on any offensive player the first 3 rounds needs to be used on safety, DT and CB!! And we mite need more help at LB too, so that could possibly take the first four picks in the draft on defense, not to mention the fact that we mite need help at DE too!! This whole draft looks like a good time to go heavy on the defensive side of the ball!! As much help as we need on defense it would be a waste of draft capital to use any pick on the offensive side of the ball!! And in case you didn’t notice, last season we were a top 5 offense in pretty much every category, and defense and special teams were the reason we kept losing games, so if we sign all our star offensive free agents, then we won’t need help on offense!!

Every year. Real Fans of football and more over the Cowboys know that ITS our defense that needs upgrading, and every year there’s a writer that promotes drafting more offense. I really wish people would seek to understand before they look to be understood. I’ve read your replies to other commenters and simply using round one and three on defense is not enough. There needs to be a concentrated effort to seek help on the defensive side period . Dak is not Mahomes nor is the offense a pass happy quick strike high point total type that the philosophy is that plays keep up. Know who and what you are as a team.

I agree on the defensive part to aquire positions that needed to be addressed. Safety (heath gone definitely), CB (resign jones) awuzie gone( too many mistakes..not enough coverage). Sign LB In draft or free agency dept.. But why would we not keep Quinn… He’s been a major asset to our DE AREA.. MAYBE aquire a DE in draft for future seasons & most of all get rid of c.fleming (no good) r Gregory (too many issues.. Time to cut strings)