The Dallas-Washington rivalry always brings an emotional cache when the two teams meet on the field, but in 2021 it's also fairly relevant to the rest of the NFC with both currently qualifying for playoff spots. As we await tomorrow's big game, here's a look at the final Week 14 injury reports for both teams.

Getting a 10-day break since their last game in New Orleans, the Cowboys will head to the nation's capital arguably the healthiest they've been all season. Not only is the injury report shorter than usual, but Dallas looks forward to getting DE Randy Gregory and DT Neville Gallimore back from injured reserve as well.

It's hard to imagine Tony Pollard playing with a partially torn plantar fascia, having missed practice all week, but the team hasn't ruled him out just yet. Hopefully the extra rest has allowed Ezekiel Elliott to progress on some nagging injuries and get back to his early-season form. The addition of veteran RB Ito Smith to the practice squad suggests Dallas is prepared to be without one of their top backs.

Losing Noah Brown hurts on special teams and some offensive packages where his blocking skills are utilized. Thankfully, the rest of the WR group is ready to go and backup Malik Turner has proven he can be effective when called upon.

It's a tougher time medically for Washington. They have some starters banged up and a few more who've just gone on reserve lists.

Starting TE Logan Thomas suffered a knee injury last Sunday against the Raiders and will be out for at least three games on injured reserve. That knocks him out of three critical NFC East matchups; both games with the Cowboys and the away game against the Eagles.

Another key starter, DE Montez Sweat, will be out tomorrow after landing on the COVID-19 list. Coupled with the loss of Chase Young earlier this year, Washington's pass rush is far from what it could be and makes for a poor matchup with Dallas' offensive line finally coming back together.

As for their weekly report, the two official “OUT” players are both backups. Washington can suffer those losses so long as starters like Curtis Samuel, Jamin Davis, and Landon Collins are available.

While not officially a starter, J.D. McKissic is an important offensive piece and the type of back that Dallas has historically struggled against. All four “Questionable” players have been practicing the last few days and are expected go on Sunday.

Sweat being out hurts their chances. Looks like we will be seeing CC, with TP probably not going. To me, CC is a pretty good backup, remember him when Cowboys played Philly. Hopefully EE looks better than recently, have to be able to run the ball. WFT appears to be more banged up, and Cowboys are getting players back.

For some reason MM felt like he had to give the WFT extra incentive, so this game is hard to figure. Again, on paper Cowboys look to be the better team. but I would not be shocked to see an upset here.

Don’t know why Coach M would give The no names billboard material? It’s hard enough to play teams from week to week who get up to play Americas team!! BUT there again on paper if we play to our potential it shouldn’t even be a contest! Bottom line it’s time to put up or shut up!!

On paper Bills should blow out the Jags when they played them, but that didn’t happen, the Bucs on paper should’ve beaten Washington, but they didn’t, and now they on a win streak, there’s many many more examples of teams getting beat that ON PAPER they should’ve won against,

It comes down to who’s got more will to win, who’s coming out with a better plan, who can counter better, cuz i can tell you, we are gonna get the book thrown at our struggling offense with River Boat Ron and this Washington D, so we’ll see if MMC has the team prepared for that, or he believes they can just show up and kick the snot out of them and end up taking a L cuz we got a BIG HEAD yet again

With a nearly healthy roster, absolutely no reason why the cowboys should lose this game against a hobbled team, that lacks the talent we do. After his proclamation that the cowboys will win, MM now bears the responsibility for having this team ready to play. No excuses for this one. We absolutely have to win this game.

I know the cowboys are healthy now but we should have destroyed the broncos. The raiders.. and we barely beat the hobbled Saints. Worried about the boys. Washington has the momentum from like a 5 game win streak.

If Kellen Moore continues to use a weak playbook of no STRONG RUN GAME to create momentum from the beginning of the game..Cowboys will not come out on top. They have been playing and looking very weak. Kelley believes in running the ball. Dan looks like he has been playing scared. ..ijs

If Kellen Moore continues to use a weak playbook of no STRONG RUN GAME to create momentum from the beginning of the game..Cowboys will not come out on top. They have been playing and looking very weak. Kellen believes in THROWING the ball and no run game. Zeke won’t rest..and he can’t run like he use to..we have no Pollard in this Washington game. Dak looks like he has been playing scared. 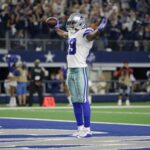 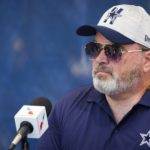