The Dallas Cowboys were embarrassed by the Colts last Sunday. There was not one area that wasn’t shown up in Indianapolis. However, it’s that sort of game that good teams sometimes need because it helps them come back to Earth and realize they’re not unstoppable. So now they need to learn from the past and move on to Tampa Bay.

This game is important not just because a win would clinch the NFC East for Dallas but losing two in a row and then going to New York to play the Giants, who are riding high, would set a bad tone for the end of the regular season. Playoffs or not.

Tampa Bay is eliminated from the playoffs, their coach is on the hot seat and there’s doubt about Jameis Winston as the future quarterback of the team. They have nothing to lose, which makes them dangerous.

Don’t get it twisted, the Cowboys are by far the better team, but on any given Sunday, anything can happen. And with a team with everything to gain and a team with nothing to lose, the Cowboys better cover all their bases.

The Cowboys have the personnel to win this game, but these players have a huge ability to change the outcome of the game, for better or worse. 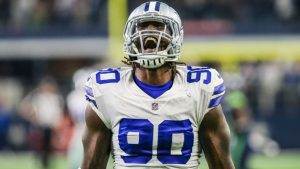 Tampa Bay Right Tackle Demar Dotson is not 100% and is not for sure going to play. Regardless of who the right tackle is, DeMarcus Lawrence needs to play in this game the same way that made him a Pro Bowl defensive end.

The Cowboys were unable to take down Andrew Luck last week, and this week they go up against a Tampa team whose quarterback is not near as mobile as Luck, and has given up 37 sacks all season.

Whether it’s Dotson or someone else, Tank has the edge.

There’s no excuses this week. The Buccaneers don’t have close to as strong of an offensive line as the Colts had. The Cowboys need Lawrence to get to the backfield and make Jameis Winston uncomfortable if they want to win this game.

DeSean Jackson has played the Cowboys many times in his career, and has always been public enemy number one for the Dallas secondary. He’s freaky fast and can make a big play at any moment. The only thing stopping him? Xavier woods.

Xavier Woods has had a nice sophomore season, and part of that is because of his ability to stop the big play from happening.

He’s got two interceptions, eight pass break ups, 47 tackles and a forced fumble on the season, but faces an underrated challenge in the league’s top passing offense.

Woods wont be alone. He’s got Pro Bowl corner Byron Jones, Chidobe Awuzie and (the G.O.A.T.) Jeff Heath in the secondary to help but he will be essential in stopping the deep passes. DeSean Jackson is the obvious deep threat but this Buccaneers receiving corp is full of big-play receivers and Woods will need to bring his A-game.

He’ll be depended on heavily to stop any passes from getting behind him. 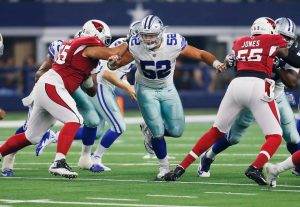 It’s not yet a forgone conclusion as to whether Zack Martin will play or not but it might be best to save him for another week and allow him to get healthier. Connor Williams did a good job last week filling in for the injured Martin and might make the decision to allow him some rest a bit easier.

This time around, they’ll face Pro Bowl defensive tackle Gerald McCoy on the interior and while Zack Martin would make that matchup more noteworthy, Connor Williams might not be in too much trouble.

Gerald McCoy has been nursing a shoulder injury and isn’t certain if he’s playing this week. Given that the season is a wash for Tampa, it would make sense to sit the All-Star. However, should he play, he won’t be 100% and would help the rookie guard immensely. This may be a moot point if Zack Martin is active but Cowboys fans shouldn’t worry if Connor Williams is called on again.

This is a game that could help set up Connor Williams’ career and allow their All-Pro guard more time to heal. 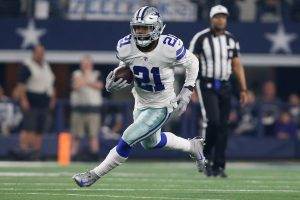 This one should be obvious but the Cowboys need to feed Zeke. The league’s leading rusher was just invited to his second Pro Bowl and is the Cowboys’ best offensive weapon. Not only does Tampa Bay have the 27th worst run defense in the NFL (allowing 128.1 rush yards per game), but they are the worst red zone defense in the league as well. This game is primed to be one that Elliott should have a field day with.

I can understand the desire to get Dak Prescott going and use Amari Cooper and Michael Gallup but the team needs to focus and let Elliott break down this Buccaneer defense. Once that’s done, it can be the rest of the offense’s turn to eat, including letting this last player run the ball as well.

Unfortunately for Dak Prescott, being the quarterback of the Dallas Cowboys has him in a position in which he’ll be scrutinized for every bad game or play, two or three times harsher than the quarterback for the Dolphins or Bengals.

He’ll only get credit when he puts up numbers reminiscent of Roger Staubach, Troy Aikman or Tony Romo. Even though he was not the main reason for the shut out against the Colts, he needs to have another big game like he did against the Eagles the week before to remind everyone how great he can be.

It’s ironic that this week’s game is Tampa Bay. Not only do they allow the 27th most passing yards in the league, but quarterbacks who’ve played them complete 72.2% of their passes and have a passer rating of 111.1 (both highest in the NFL). Dak Prescott’s best career completion percentage in a game is 88.9, which was against the Buccaneers in 2016.

This is Prescott’s golden opportunity.

Every week the chatter will be different but the pressure is on Prescott to ball out. He’s got the skills and receivers around him to do so but he needs to make it happen for people to change their tune. For at least one more week.