The Dallas Cowboys started the 2019 season as hot as anyone winning each of their first three games. Dak Prescott had nearly 1,000 yards passing, All-Pro Ezekiel Elliott had the best three-game start of his career and the Cowboys had a two-game lead in the NFC East.

However, the next three games saw the Cowboys struggle mightily. They only scored 10 points against the New Orleans Saints, Aaron Jones had a career day with four rushing touchdowns for the Green Bay Packers and Sam Darnold of the New York Jets had his best day as a pro with 338 yards passing.

Sitting at 3-3 and in a first-place tie with the Eagles, the Cowboys hosted Philadelphia two weeks ago at AT&T Stadium. With NFC East supremacy on the line, the Cowboys had their best performance of the season in a dominant 37-10 victory.

With momentum on their side and the bye week to get guys rested and healthy, the Cowboys await the New York Giants on Monday Night Football. Here are five players to watch as the Cowboys look to remain atop the NFC East. 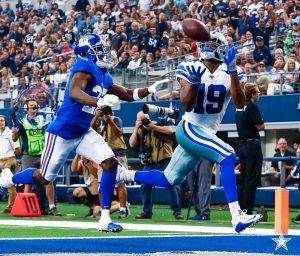 Amari Cooper changed life for Dak Prescott and the entire Cowboys offense when he was acquired midseason in 2018. This season has been a continuation of that as the Cowboys entered Week 9 with the NFL’s third-ranked passing offense due in large part to Cooper. He has 621 yards and five touchdowns in the first seven games of the season. Also, Prescott is completing an unreal 76% of his passes to Cooper.

He’s made a living feasting on NFC East defenses since arriving in Dallas. He averages 108 yards per game, has scored seven touchdowns and more importantly, the Cowboys are 7-0 within the division with Cooper. The Giants entered Week 9 with the leagues 25th ranked passing defense so I expect Cooper to have a big game. 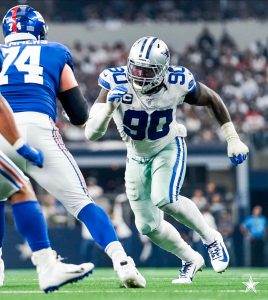 It’s been a slow start to the 2019 season for the Cowboys top pass rusher. He only registered a half-sack in the first two weeks but seemed to gain momentum with a sack in back to back games against the Saints and Packers. Unfortunately, he’s only had one sack in the last three games, and only has 3.5 for the season so far.

I feel Lawrence is due for a breakout performance that’s worthy of the five-year 105 million dollar extension he signed back in April. He has more sacks vs the Giants than any team he’s faced in his career. With rookie signal-caller Daniel Jones coming to town there’s no doubt Lawrence will be licking his chops. 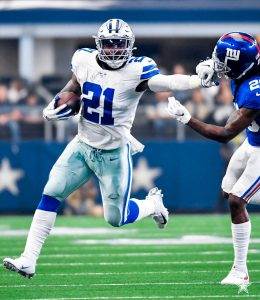 The two-time NFL rushing champion looks to have found his groove in 2019. He’s rushed for over 100 yards in back to back games and has three games of the sort in the last five. With 602 yards in the first seven weeks, he’s still right in the mix for his third rushing title in four years.

Elliott has completely dominated the NFC East since the start of the 2017 season. The Cowboys are 10-1 in the last 11 games Elliott has played in within the division (3-0 vs the Giants) and has eight 100-yard games over that span. The Giants run defense is in the bottom third of the league so the Cowboys should feed Elliott early and often. 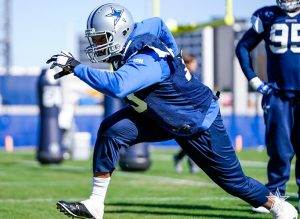 The Cowboys added defensive line depth when they traded for former pro-bowler Michael Bennett late last month. Bennett is very familiar with the defensive scheme in Dallas having played under Kris Richard in Seattle during the “Legion of Boom” days.

Bennett has the ability to play on the outside as well as the interior. It will be interesting to see how much Bennett is used and how he’s used against the Giants. Any combination of himself paired with either Maliek Collins or Antwaun Woods will be formidable. Also, putting Bennett on the edge opposite All-Pro DeMarcus Lawrence or Robert Quinn is another possibility. There’s plenty of options with a player who can play multiple positions and it will definitely be something to keep an eye on. 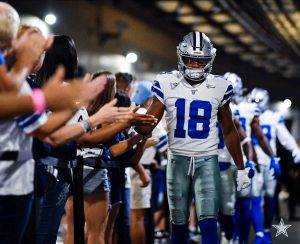 In March, the Cowboys added some veteran firepower to their receiving core by signing Randall Cobb. So far it’s been a tough start for Cobb in Dallas as he hasn’t had the impact everyone would have hoped. In the six games he’s played in Cobb only has 19 receptions for 239 yards, with his only touchdown coming in Week 1.

Cobb finally playing to the level he’s capable of will only add to an offense that came into Week 9 as the top unit of it’s kind league-wide. The Giants pass defense leaves much to be desired so this is the perfect opportunity for Cobb to make the impact he and the Cowboys have been waiting for all season.

This is what you might call a “Trap Game” for the Cowboys. In all phases of the game, they are better than the Giants but games aren’t played on stat sheets. These five players can help the Cowboys avoid a letdown and improve to 4-0 vs the NFC East in 2019.