The NFL season marches along to week 13. It doesn't stop even if your fantasy team is struggling and out of playoff contention. Thankfully, there is always daily fantasy and DraftKings for those that need to get their fix.

The Dallas Cowboys will be traveling to New Orleans to take on the Saints Thursday night. This game might be different than the Cowboys' past two, where the over/under was above 53.5 in both. The over/under in this game stands at 47.5. Let's look at this showdown slate.

QB Dak Prescott ($17,700) – Dak Prescott is coming off a game scoring 28.3 DraftKings points. He has now thrown for over 300 plus yards four times this season and produced multiple touchdowns in all but two games.

The Saints rush defense is outstanding, so I'm definitely staying away from Ezekiel Elliott in this spot and probably leaving him off the entire slate. The Saints, though, give up the 19th most DraftKings points to opposing quarterbacks on the season and are coming off a game in which they gave up four passing touchdowns against the Bills and Josh Allen.

The Saints are also ranked 26th in passing yards per attempt, so a few deep shots could be there for Prescott, and his receiving core is getting back CeeDee Lamb and potentially Amari Cooper.

Dak is the safest captain selection in this showdown.

I would consider pivoting to Alvin Kamara if he does play, but there is a decent shot he doesn't suit up.

WR CeeDee Lamb ($10,000) – Employ CeeDee Lamb with confidence here. Lamb will be looking to pick up where he left off before suffering his concussion. Even if Amari Cooper does play, he may be limited in snaps, and Lamb will be Prescott's clear-cut number one option.

The Saints ranked 26th against wide receivers in terms of DraftKings points against and give up fifth-most receiving yards to wide receivers on the season.

WR Deonte Harris ($4,600) – Deonte Harris and the rest of the Saints' receiving core is not where you want to put a lot of faith in general. Harris only has 27 receptions on the season for 427 yards, but those are all team highs amongst Saints receivers.

I'm not expecting much from any Saints wideout in this game, but Harris has big-play potential. He averages over 15 yards per touch and doesn't need that many opportunities to break one. However, he has five or more targets in four of his last five games and has scored 10+ DraftKings points in two of those.

The only other viable pass-catcher to employ for the Saints in this game is Tre'Quan Smith. Smith probably is the safer bet as he hasn't scored fewer than 7 DraftKings points in his last five games. Feel free to consider him as an option as well. I just prefer to take the discount with Deonte Harris.

RB Mark Ingram ($5,000) – This will be an even better play if Alvin Kamara doesn't suit up. In the chance that Kamara does play in this one, I still expect Ingram to receive a decent workload as Kamara has sat out the last three games and has only been a limited participant in practice this week.

The Saints' philosophy in this game should be to establish the run and rely on their defense because they will not beat the Cowboys in a track meet, with the injuries on this roster. That bodes well for Ingram, who is more of a between the tackle runner than Kamara.

With Taysom Hill starting, his presence on the offense could grow even further, and the Cowboys don't have the best rush defense giving up 4.4 yards per carry.

DEF Dallas Cowboys ($4,400) – The Cowboys' defense makes sense in this game. As mentioned, the Saints will be starting Taysom Hill, and they will be without their starting left and right tackles. This is great for the Cowboys' pass rush that has generated multiple sacks in four straight games and has three or more in three of those games. This unit is only two games removed from producing 23 DraftKings points against the Falcons.

I wouldn't expect that same kind of production, but anything is possible with the Saints' offense being in a state of disarray. The Cowboys average 9.1 DraftKings points per game, and in a game where points may be tough to come by, Dallas will be a popular flex pick. 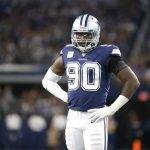