The NFL Draft and the events leading up to it have grown in fan interest exponentially in recent years. Moving the Draft to different markets has drawn massive crowds, first in Chicago in 2015 and the streets of Philadelphia in 2017. The Cowboys saw what the rival Eagles could do hosting the event in their city and brought the draft to AT&T Stadium in 2018, before Nashville kept the NFL's momentum going in 2019.

The Cowboys have not only their home stadium to host games and events, but The Star at Frisco – which is in consideration to host the 2023 NFL Scouting Combine.

While the league has been willing to move the Draft, the Combine has always been held in Indianapolis. Putting the Combine on television was another huge step for the league promoting the draft, but the event still exists as a crucial point for teams to gather information on prospects. Fans tuning into Combine coverage see the pristine turf field of the Colts, but Indianapolis has also served well as a host site because of medical facilities and other resources nearby.

The 2023 NFL Scouting Combine is up for bid and Dallas is one of three cities (Indianapolis and Los Angeles) in the running.

If Dallas ended up winning the bid, it would likely be held at The Star in Frisco. The Combine has been held every year since 1987 in Indianapolis.

The Cowboys have all of these resources at their sprawling 91-acre training facility The Star, and are in consideration along with Los Angeles to be the first location outside Indy to host a Combine. SoFi Stadium has welcomed in fans in Los Angeles for the first time this season, and reviews have been stunning for the new home of the Chargers and Rams since 2020. It will be the host site for the 2022 Super Bowl.

The 2023 Combine would further cement LA's status as a new hub for football, though the Cowboys have already hosted a Super Bowl in their new stadium as they try to put The Star in the spotlight next.

Fans of the HBO series Hard Knocks were treated to a drone footage tour of Frisco's Cowboys town this season. Even if the Combine remains in Indianapolis beyond 2023, the Cowboys have always made their presence known by parking Jerry Jones' bus in clear view for fans and media alike. 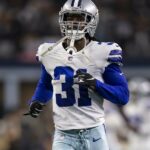 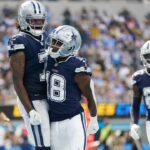