Dallas Cowboys Good, Bad, and Ugly From Week 12 Against Patriots

Sloppy play and sloppy weather lead to yet another Dallas Cowboys loss at the hands of the New England Patriots. The 13-9 loss by the Cowboys was another close one, but in the end the Patriots proved why they are so tough to beat when they have the home field advantage at Foxboro.

I don't know about you, but I don't really know what to make of the Dallas Cowboys any longer. There is a flicker of hope that still lingers, but with each and every loss that flame diminishes even further. I don't know how much more it will take before it sizzles out. A Thanksgiving loss next week might just do the job.

The Patriots are behind is now, meaning it's time to move on. The Buffalo Bills are up next on the schedule and that's no easy victory either. But I don't want to get into that right now. Let's get to the nitty-gritty here and jump into this week's edition of The Good, The Bad, and The Ugly. As always, feel free to use the comment section to share your own thoughts and opinions on this topic.

You really have to scrape the bottom of of the barrel if you want to find anything positive to say about the Dallas Cowboys performance Sunday afternoon against New England Patriots. But if you look hard enough there might just be a silver lining. I know you can take little comfort in it, I barely do, but the Cowboys are still somehow leading the NFC East division thanks to the Seattle Seahawks victory over the Philadelphia Eagles.

I know it's a little thing, but the fact the Cowboys still hold their playoff destiny in their hands is something to at least keep you hopeful they can still turn their season around. They may have to win out the rest of the year and hope the Eagles suffer a few losses, but the playoffs are still a very real possibility for Dallas. Unfortunately, Philadelphia has one of the easiest remaining schedules and there are a lot of good teams remaining on the Cowboys schedule, starting with their next opponent… the Buffalo Bills. 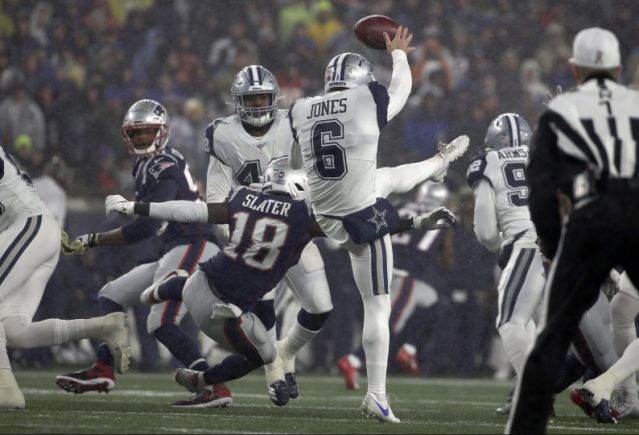 I could sound like a broken record here and go with the Dallas Cowboys inability to get out to a fast start once again against the New England Patriots like they'd done in nearly every game this season, but I won't. That would have been too easy. Instead, the bad for the Cowboys in Week 12 against the Patriots for me was the special teams play, especially in the first quarter. Dallas' special teams have been horrendous all season and they even giftwrapped the Patriots the only TD in the game.

In the first quarter alone the Cowboys missed a field goal, had a punt blocked, and nearly fumbled away two kickoffs. That's just the first quarter mind you. It continued throughout the game. These mistakes are not only the easiest way to lose games in the NFL, but they are also the best way to get coaches fired (fingers crossed). I don't know what the future holds for Jason Garrett and his coaching staff, but there is no reason why Keith O'Quinn, the Cowboys current Special Teams Coordinator, should be employed beyond this season.

So many different things I could've gone here in this category. The Dallas Cowboys offense, defense, special teams, officiating, and the coaching staff are all worthy, but in the end I decided the ugly was Tyron Smith's play and his untimely penalties earned the nomination. The Cowboys six-time Pro Bowl Left Tackle might have done more bad than good against the Patriots, and for that reason I decided to single him out this week.

By my count, Tyron Smith ended up having a total of three penalties called against him. The first one pushed the field goal attempt back in the first quarter, which Kicker Brett Maher ended up missing from the 46. Then there was the tripping penalty called against him. But, the one that hurt the most might've been the holding penalty that negated a first down catch by Amari Cooper heading into the fourth quarter, putting an end to what looked like a promising offensive drive by Dallas.

What is your Good, Bad, and Ugly from Week 12 for the Dallas Cowboys?