Sitting at first place in the NFC East and coming off of consecutive primetime victories, you’d think the national pundits would be falling over themselves to credit the Dallas Cowboys as an NFC contender.

Instead, it’s being pointed out that the five wins Dallas has racked up thus far have come against, well, subpar teams. Four of their five victories were against teams with losing records, including the openly tanking Dolphins and one-win Redskins.

These facts can’t be denied, of course. Nor can it be denied that the Cowboys disappointed greatly when they did face off with the NFC elite earlier in the year. This Sunday night, though, the Cowboys have another chance to prove how good they actually are.

Particularly on the defensive side of the ball.

Though they have been known for their defense in recent years, the Minnesota Vikings’ offense has been among the best in football this season. Ranking 7th overall in offensive DVOA (8th in both run and pass DVOA respectively), the Vikings have deployed quite the explosive unit in 2019.

Head coach Mike Zimmer is all about the run game, as shown by the hiring of Gary Kubiak last January. Kubiak has installed his outside zone running scheme in Minnesota, and pairing his schematic background with the skill of running back Dalvin Cook has proved to be a match made in Heaven.

Cook is finally healthy and available this season, and we are seeing the next-level vision and balance that he once displayed each week at Florida State. Cook has already rushed for 894 yards and 9 touchdowns this year, putting him right among the league’s elite runners.

Playing defense and running the ball successfully is far from surprising for the Vikings, but their passing efficiency has certainly raised some eyebrows. After an especially slow start to 2019, quarterback Kirk Cousins has been awesome as of late. Cousins is third in the NFL in completion percentage over expectation (minimum 200 attempts) behind just Russell Wilson and Dak Prescott, and has been maximizing the passing attempts he gets in this run first offense. 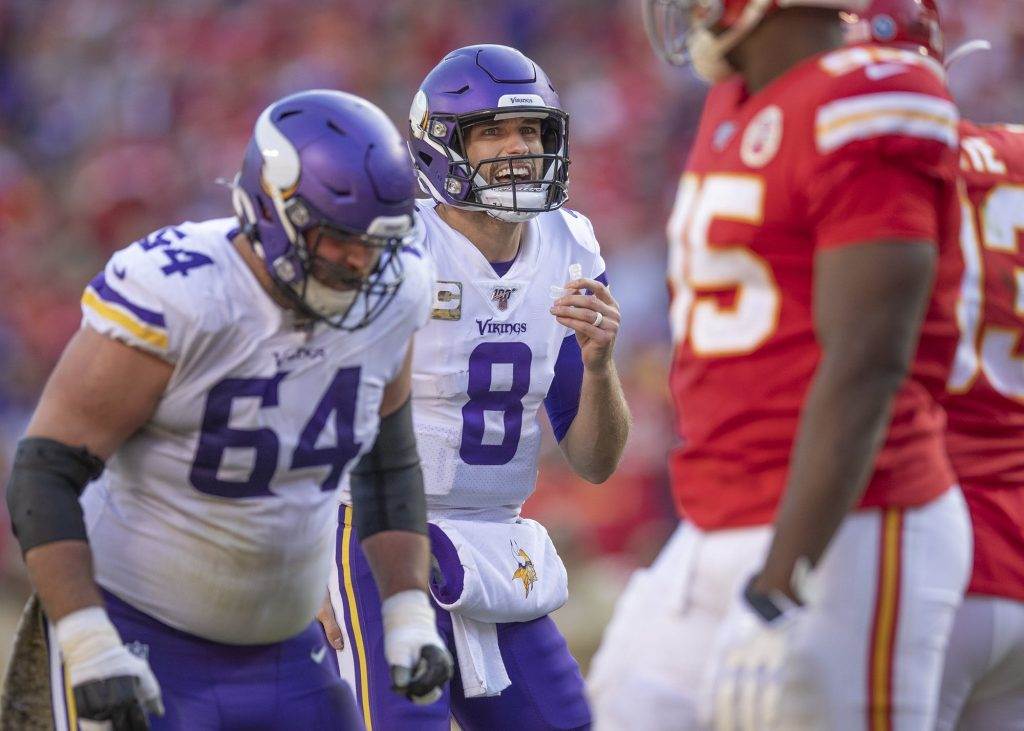 Cousins, of course, is aided by his supreme weaponry on the outside in receivers Stefon Diggs and Adam Thielen. Luckily for the Cowboys, Thielen is expected to miss the matchup this weekend with a quad injury.

In his absence, the Vikings will need to look towards someone like Laquon Treadwell to step up. Treadwell was hyped coming into the league and is a former first round pick, but he won’t strike fear in any of the Cowboys defenders on Sunday. Certainly not like Thielen does each week.

Dallas’ defense will have their hands full with this Vikings offense, but there are weaknesses which can be exploited. Minnesota’s offensive line has proven to be a heck of a run blocking unit, but they are about middle of the road in terms of adjusted sack rate.

Cousins averages a league leading 3.04 seconds in terms of time to throw, which makes sense considering the play action shots this offense likes to take. If the Cowboys new pass rushing trio can get after the interior of the Vikings offensive line, they could force Cousins to get rid of the ball before he’s ready and force some turnovers.

Dallas has seen first hand how rattled Cousins can get in the face of pressure in the pocket, and getting the most out of each of their front four as well as Jaylon Smith as a pass rusher will be key on Sunday night.