Gerald McCoy is an ex-Dallas Cowboy. But if you weren't paying close attention, you may have never known.

McCoy was viewed as a key free agent signing for the 2020 Cowboys, instantly becoming the team's best interior defensive lineman on the day he put pen to paper. Unfortunately, McCoy suffered a brutal quad injury during training camp. He was then released via the injury waiver, and never played a snap for America's Team.

There's been speculation about whether or not Gerald McCoy will continue his NFL career, but the six time Pro Bowler put those questions to bed in an interview with the Tampa Bay Times this week.

“I understand that I've been injured, and I honestly believe the lack of interest in me being on a team right now is because of my injury…I haven't played in a year and I'm 33 years old. But man, when I still tell you I can play this game at a high level, I know I can” – Gerald McCoy.

After 10 seasons at one of the sport's most grueling positions, teams are obviously skeptical of what McCoy can offer. But he's making it clear what his intentions are.

McCoy played at an elite level for much of his nine seasons in Tampa Bay, tallying 54.5 sacks with the Buccaneers. In 2019, he signed with the Carolina Panthers and was looking ready to start that journeyman part of his career. It's a shame this freak quad injury may have cut his NFL lifespan short, but could the Cowboys be interested given McCoy's insistence on getting back to the league?

Dallas would not have signed Gerald McCoy to a three year contract last year if they didn't think he still had value, but so far they've looked for other ways to add to their defensive line.

The Cowboys have gone out and signed Brent Urban and Carlos Watkins as free agents, and have re-signed their own in Antwaun Woods. In spurts last year, the young Neville Gallimore gave reason for optimism as well.

So while I am certainly rooting for Gerald McCoy to find a home in the league, it seems unlikely that home will be with the Dallas Cowboys.

I don’t see the problem with signing him again, as long as he signs another contract that let’s us let him go if he gets injured again!! James Vargas says no more injury prone players, but if we sign him to another contract that allows us to release him if he gets injured then I don’t see the problem with it!! It’s not like we’re losing anything!! He’s good when healthy, so I think it’s worth bringing him back for another year or 2!!

If he was still a good player looks like the Panthers would have retained his services ! I wouldn’t mind giving him a chance but with the understanding that he is to come in and compete for a job and STAND during the National Anthem! 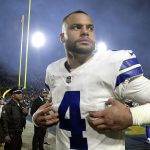 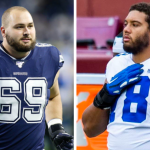