Do The Cowboys Need To Address Left Tackle This Offseason?

Since being drafted in 2011, Tyron Smith has been a staple of the Dallas Cowboys offensive line.

A two time First Team All Pro as well as an 8 time Pro Bowler, Smith has been one of the best left tackles in football pretty much since entering the league. He was also the first of the Cowboys offensive line renaissance, with first round selections of Travis Frederick and Zack Martin following his in 2011.

But the great Tyron Smith has unfortunately failed to play a full 16 games since 2015, and missed all but two games last season. When available Smith is still a top tier tackle, but you have to expect he'll miss at least two to three games going forward even in a relatively healthy season.

Leaving us with the question, do the Cowboys need to find left tackle help this offseason?

Our Jess Haynie referenced the possibility of actually cutting Smith this week, though I am not in agreement with that potential move. Still it's becoming evident that offensive line may once again be an area of need for the Cowboys, especially after the putrid injury luck they suffered upfront in 2020. 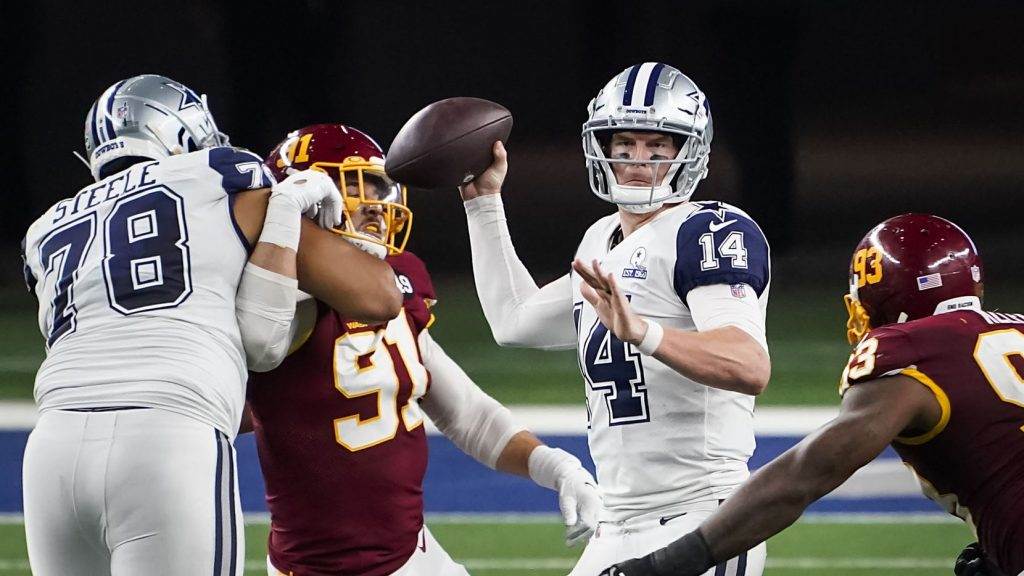 Behind Smith this season was Terence Steele, who struggled mightily at times during the season. Steele has some of the measurables you look for in a tackle, but his technique was not up to par in 2020. Brandon Knight saw action as well at both left and right tackle, but considering that both Smith and La'el Collins were out for the year, the Cowboys offense was put in a tough situation.

Neither Steele nor Knight look like the longterm answer at left tackle, meaning they may need to look at taking one during the 2021 NFL Draft.

Is drafting a player who, if all goes well health wise, will be a swing tackle his rookie season worth a first round pick? I'd say absolutely not.

The most likely scenario is that the Cowboys look for a mid round target at tackle to potentially backup both Smith and Collins, while also evaluating cheap free agents, like they did with Cameron Erving in 2020.

Either way, the offensive line is quickly becoming a position of need for the Dallas Cowboys.

Kevin Bradyhttps://kevinrobertbrady.wordpress.com
Die-hard Cowboys fan from the Northeast, so you know I am here to defend the 'boys whenever necessary. Began writing for a WordPress Cowboys Blog, and have been with ITS since 2016.
Previous article
Former Cowboys WR Miles Austin Joins New York Jets Coaching Staff
Next article
Trevon Diggs was the NFL’s Best Rookie Cornerback Down the Stretch

I personal believe it’s time to move on from Tyron, he’s on the downside of his career and his injuries are only going to get worse. Draft a LT in the 1st, and cut Tyron so that his money can benefit us moving forward. I’m a fan of Tyron but this is the business of football, its best to get rid of a guy a year early than a year to late.

100% agree with you Kevin, besides Sewell there isn’t a O-Lineman worth taking at 10th cuz IMO there isn’t much separation between O-Lineman after Sewell till you get way down to the mid 2nd round , i’d go CB if Surtain/Farley is there with 10th pick, and 2nd round depending on who’s there , i’d go tackle then or Safety , and 3rd round i’d get either the one you didn’t get in 2nd round or a LB , and 4th round get the one you didn’t get with 2nd and 3rd picks , this D is AWFUL and we CAN’T afford to have some busts on D to go along our overpaid players, we need guys that have the best chance of translating to great players to help fix this D, the quality of D goes down quite a bit from round to round where as O-Lineman like i said doesn’t go down at least till mid to late 2nd round and then it goes down from there

i have to total disagree there no way im cut a big guy like Smith with all the time off and time to heal up and at my age of 47 right now I have only got stronger and better with age and were I might have slow down at i found other ways to make up for it so if there is nobody out there that even close to this guy size then I have to pass on cut him when I could use a tail back to help block the out side so he doesnt have to pull so much on the out side witch would over all seal the left side and I could use him more as a push for forward run to open up better lanes for my run back cause over all who going to stop him run down hill and plus with all every one think he done that only fuels a fire inside someone that I beat he has a breath take year come up then he retires after they make the play offs this year I think he the x factor come up for a shot to get that ring so no on sale him short would.be a very big mistake

I’ve said for the last few years we need to be addressing the left tackle position !With that said I believe the Cowboys need to keep TS and limit his snaps per game because he still has a few more miles on him but he can’t handle the day in and day out grime at this point of his career! TS has been a super good player for the Cowboys and the Cowboys need to take care of him and send him out with respect at the proper time!

Simply too thin on the O line to automatically cut him. Cowboys have an elite medical team between the training staff led by Jim Maurer and physicians such as Cooper, Curry, et al. They have the vital info on T Smith. We don’t.

Looking back at the “Great Walls” of the early-mid 90’s, Tuinei, Gogan, and Nate were carryovers from the Landry era. But after adding Step and Gesek, they didn’t stop. They kept reloading. That was key. Time to reload.

I am hoping what has been essentially a full year off will be refreshing and rejuvenating for Smith. Unless Sewell somehow falls to 10 this is not the year to replace him. I do agree that the Boys should limit the miles put on him this season so he can be at his best late in the season if there is a push for the playoffs. One of the blessings in the mess that was the 2020 season is young player got a lot of playing time. They will need to lean on them this year to keep everyone fresh. The focus must be on restoring order on the defensive side of the ball this year. I don’t see the need to use any early round pick on the offensive side of the ball. Maybe some late round picks on some smaller school players that might be diamonds in the rough to help build some depth and to develop for the years to come.

no, No. Just go ahead and draft the best LT available in the first round. Start the new guy at LT and move Smith to LG. Smith may not get hurt as readily at LG. Help your run game and help youy QB. You may actually be able to run a successful screen pass on that side

You people that want to waste our first round pick on an offensive tackle are crazy!! This draft really needs to be nothing but defense!! Pretty much every single free agent we have this year is on defense, so we NEED to draft for defense and we NEED to draft a corner in the 1st round and then maybe another one in a later round cause the only corner we’ll have left worth starting is Diggs, other than him we have nobody else!! While on the other side of the team, we have a lot of linemen on offense on this team!! They may not be the best options in the NFL, but we still have plenty of offensive linemen!! But with that said, I wouldn’t mind if we drafted a Walker little or something like that in the 3rd round, but the idea of wasting a first round pick on anything but a corner just makes me sick!! Don’t forget, we would have won a lot more games this season if it wasn’t for our defense!! And most of the starters on the defense are free agents this year, so we will need major help on the defense, and too much help to be wasting our first pick on an offensive lineman!!

Smith has been a superior LT for a good long time. He may have some gas left in the tank, so let’s see how he looks going forward. I think he has earned that respect. However, that should not preclude us from dipping into the draft for an OT, in say the 3rd or 4th rds. At that point, it should not hurt us from first picking up much needed, good defense prospects first. For much of the year we played UDFAs at both OT spots, outside of C Erving. So lets snag a drafted player to throw in the mix. Perhaps a Jalen Mayfield, who has the distinction of playing well against Chase Young in 2019, or a Teven Jenkins, who helped Chuba Hubbard find running lanes, will be available then. Or if a higher rated player falls to us, all the better.

Cut Smith now–his body is done. Has been for 3 season’s now. Money could be better spent.