Over the last three weeks the Cowboys offense has looked exponentially better than they did the first 8 games of the season. And, the catalyst of it all despite what some may argue, has been running back Ezekiel Elliott.

Heading into Sunday's slate of games, Ezekiel Elliott leads the NFL in rushing with 1,074 yards and has also scored 6 rushing touchdowns. He passed up former rushing leader, and MVP candidate Todd Gurley this Thursday with a monster 100+ yard game against the Washington Redskins. Elliott is averaging just under 5 yards per carry as well, and has 47 catches for 363 yards and 2 touchdowns through the air.

While all of these stats are obviously impressive, it's Elliott's impact on the Cowboys as a whole which makes us wonder if he can garner some MVP consideration. Zeke is clearly the Cowboys best offensive skill player, and as cliche as it sounds, as he goes so do the Dallas Cowboys.

The only other running back who's even talked about as a potential MVP candidate is the aforementioned Todd Gurley. Gurley, who has rushed for 1,043 yards on 5 yards per carry, is clearly an important part of the Rams offense as well, but is deployed a bit differently than Elliott. Gurley has 4 less receptions than Elliott, but has 441 receiving yards to Zeke's 363! He's also caught 4 touchdowns, and ran for a league leading 13 scores. 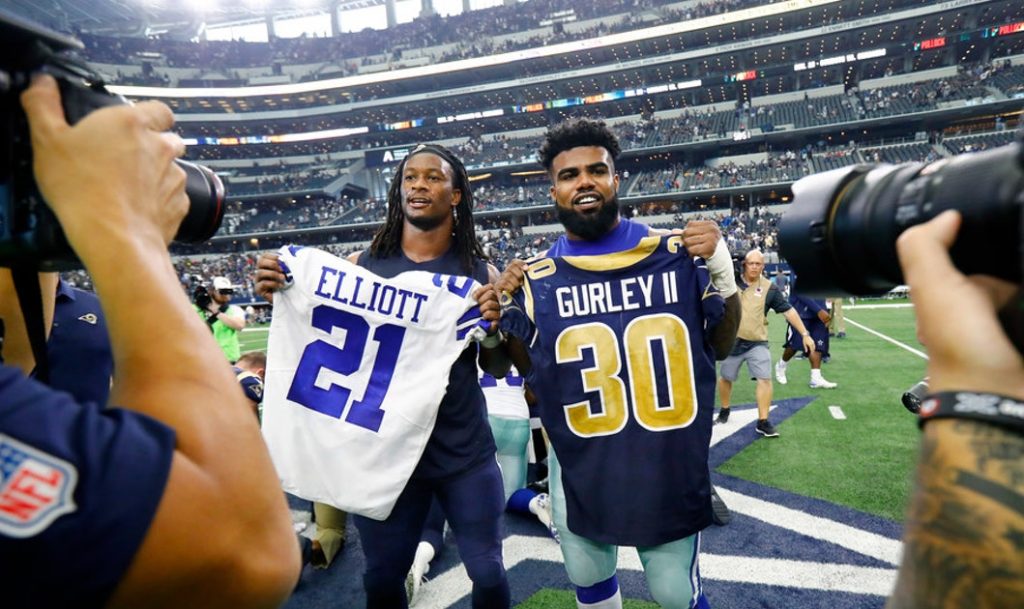 As much as I want Ezekiel Elliott to be given that MVP level respect, Scott Linehan and company may be holding him back from those conversations. The Cowboys haven't scored nearly the number of touchdowns the Rams have, and have been far less explosive as an offense. As a result, Gurley's touchdown numbers kind of dwarf Elliott's through 11 games.

Regardless, Ezekiel Elliott is at worst the second best running back in football right now, and is clearly the most important factor to the Cowboys offense. Yes, even more important than their quarterback, even if my analytics-driven wisdom would want to scream “running backs don't matter!”

The fact of the matter is that both Elliott and Gurley are the most important players on their respective offenses, but Gurley's offense being much greater than Elliott's will keep voters from leaning towards our guy.

If Ezekiel Elliott rushes for over 100 yards and a couple of touchdowns in a win over the Saints this week, however, some of those voters may begin to come around.

Kevin Bradyhttps://kevinrobertbrady.wordpress.com
Die-hard Cowboys fan from the Northeast, so you know I am here to defend the 'boys whenever necessary. Began writing for a WordPress Cowboys Blog, and have been with ITS since 2016.
Previous article
Thursday Another Team Win For Jason Garrett, Dallas Cowboys
Next article
Safe to Say Ezekiel Elliott is More than his Offensive Line

Maybe Amari Cooper is the most valuable player to the cowboy. 3-0 since he arrived