Cowboys star defensive end DeMarcus Lawrence is always good for a blog-able quote, and this week was no different.

Lawrence was asked by the Dallas media to describe the Cowboys defensive scheme, and did so as only Tank could. As seen in the below Jon Machota tweet, Lawrence called the Cowboys a one-gap defense, where they “stop the run on the way to the quarterback.”

This quote got a lot of run over the course of the next 24 hours, so I wanted to breakdown the X’s and O’s behind what Lawrence is speaking to, and compare a one-gap defense to a two-gap scheme.

Let’s start with defensive line techniques and gaps. As you can see (image courtesy of Chop Chat), the defense letters each gap starting with A on either side of the center and moving out from there. In this example we have an offense running a two tight end set, most likely 12 personnel though we can’t see a running back pictured. There’s 8 gaps the defense must account for, though there could be more if there is a full back or motioned wide receiver in the picture to provide an extra blocker in the box.

The Cowboys base 4-3 defense would only account for 7 gaps, putting the offense at a +1 box advantage and enticing them to run the football. To account for this the Cowboys would likely roll a safety down into the box, making him the force player against the run.

Let’s take a look at an example of how the Cowboys defend the run using their one-gap scheme. 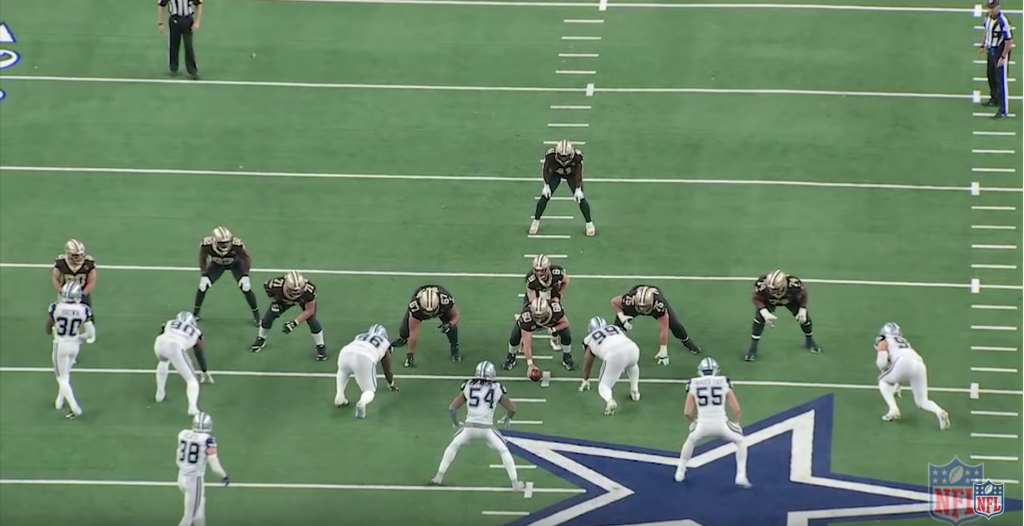 The defensive linemen have the “easiest” job in this scheme. They are tasked with getting upfield and holding their one-gap. Against the pass, they are rushing the passer and looking to get penetration through their assigned gap. Against the run, they are still looking for that same gap penetration, and will (as Tank said) stop the run on the way to the quarterback.

Here, DeMarcus Lawrence is the strong side C defender, Maliek Collins is over the strong side B, Antwaun Woods is over the weakside A, and Tryone Crawford is the C gap/cutback player. Cornerback Anthony Brown is rolled down outside the tight end and would be the force player on the edge against the run in this example.

Behind them, the linebackers are also assigned a gap. Pre-snap Jaylon Smith is eyeing the strong side A gap, while Leighton Vander Esch is responsible for the weakside B. As you can see, every gap is accounted for against the run, with each player assigned to one-gap. Hence the name. Pretty simple, huh?

The idea is that your rushmen can play with their hair on fire rather than having to maintain two gaps while diagnosing blocking schemes and controlling the offensive lineman. Typically two-gap schemes are run from a 3-4 base, as they allow for the defense to account for all 8 gaps with just 4-5 players in the box.

So, in a quick and dirty way, that is what the one-gap defense is. DeMarcus Lawrence pretty much covered it!