Ezekiel Elliott: Remind Them Who You Are

The intense and sometimes exhausting contract negotiations between the Dallas Cowboys and All-Pro Running Back Ezekiel Elliott finally came to an end yesterday. He signed the most lucrative extension at his position in NFL history at six years 90 million with 50 million in guarantees, which comes out to eight years 103 million when you add the two years he had left on his rookie deal. 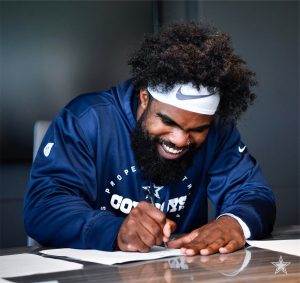 However, the Cowboys fans base seemed to be at odds during this whole ordeal, to the point some people were even saying the superstar runner should be traded or released for being “selfish” seeing as his rookie deal wasn't complete. I find that to be very odd considering NFL owners cut, trade, waive, and release players at will with years left on their deals but it's always looked at as the organization did what was best for the team. But when the player who abuses his body, especially at running back, wants to get paid what they're worth with a few years left on a deal that's looked at as selfish.

Hypocritical thinking wouldn't you say? Nonetheless, Elliott, in my opinion, is the most valuable player in the entire NFL. Take the receiving core, for example, having Elliott is critical to the success of Amari Cooper, Michael Gallup, and Randall Cobb. When 21 is in your backfield you have to drop that eighth man in the box to stop the run. Also, you have to keep a spy on him coming out of the backfield, as was evident by his 77 catches last season. What does this do? It allows Cooper more one-on-one opportunities, and with his exceptional route running, defensive backs will lose most of those battles.

Michael Gallup benefits from this because the more they have to shade coverage to Cooper the easier it is for himself to have one-on-ones. Cobb can then really work the slot with all the attention Cooper and Gallup will attract. This all comes from Elliott being a threat in the passing game.

Elliott running ball well also impacts the receiver position. No running back has more runs for ten yards or more or first downs since 2016 than him. Traditionally, first down is a running down but when you force an extra man in the box your options expand. You can then play-action early and give your receivers easier matchups when defenses expect the run.

Quarterback Dak Prescott is definitely someone who feeds off of Elliott's dominance. When Elliott isn't on the field Prescott's QBR drops from 81 to 51 during play-action, a very significant decline. Plus, he's one of if not the best blocking back in the NFL. Just watch the preseason game from a few weeks ago versus the Rams when rookie Tony Pollard almost got Prescott killed missing a block in pass protection. The more defenses have to worry about Zeke the more the Cowboys can open up their offense in the passing game by attacking downfield.

Last but not least the defensive side of the ball is affected by Elliott as well. The Cowboys have finished 1st, 8th and 5th the last three seasons against the run. Why? It's simple, they're fresh because of the offenses ability to control the clock with the running game. With the opposing offense not being able to establish any rhythm, it allows the defense to pin its ears back and attack. When teams fall behind they have to pass which basically eliminates the run game and makes them one-dimensional. This all stems from Elliott running the football effectively.

Understandably, contract negotiations can become frustrating simply because the fan just wants the player they know and love back. However, that shouldn't make anyone say things that aren't logical. You can't just plug in any runner in Elliott's place that can do what he does. Nobody runs the ball better, protects the quarterback on passing downs better, or keeps his defensive teammates fresher based on his ability to move the chains. Only two other running backs besides him have lead the league in rushing in each of their first three seasons, Jim Brown and Earl Campbell, who are both in the Hall of Fame. His value has no dollar amount, he's special, a rare breed. This has seemed to have gotten lost in the minds of a lot of Cowboys fans during the last six weeks. I'm betting on Ezekiel Elliott making sure they never forget it again in 2019.

Matthew Lenixhttps://mlenixsctx.wordpress.com/
I write dope stuff about the Dallas Cowboys and what not.
Previous article
Projecting the Dallas Cowboys’ 2019 Fantasy Value
Next article
#DALvsNYG: Betting Preview, Trends, And Prediction

“When a player wants to get paid what they’re worth”…. what an incredible concept. But wait a minute, I also want to get paid what I am worth. Doesn’t anyone? Problem is defining worth. Sorry, but none of these players are “worth” the millions of dollars they receive. Really nobody gets paid what they are worth, only what the market will bear.

Fans get upset because of the natural tendency to think that a young player should earn his way up to a new contract vs. holding out in the middle of one. What’s to stop a player from holding out every time another player “resets the market”? When Barkley gets better money than Zeke, should he hold out again? If so, then what’s the point of the contracts anyway?

The owners are no better, but they certainly don’t get guarantees from the player who gets guaranteed money.

The amount of money in the NFL is so staggering that no reporter or fan really gets that reality anyway, so it’s just a dumb argument.