As Dallas Cowboys fans became noticeably restless with how the second round of the 2018 NFL Draft opened from AT&T Stadium, imagine how Texas OT/G Connor Williams felt. Seeing six offensive linemen go before him in the first round, and four in the first seven picks of the second round, the Cowboys’ window was closing fast last night to find a starting left guard.

That is, if they were prepared to become just the latest team to overlook the Longhorns 6’5″, 296 pound prospect in Connor Williams. The Cowboys chose instead to make another dream come true, selecting Williams to walk on stage in his new home as the latest member of the team.

In doing so, the Cowboys solidified their offensive line with a prospect that could have been a first round pick last year. Choosing to return to Texas and play through injury in 2017, Williams’ stock took a hit. In talking to him last night though, sliding down to 50th overall is still a dream come true for the rookie that will now slide between Center Travis Frederick and Left Tackle Tyron Smith.

The night before, Williams had slid into the sports coat of Tyron, talking plenty in a post-pick media tour about modeling his game after the Cowboys first round pick of 2011. Williams joins Smith, Zack Martin, and La’el Collins as former left tackles to form an offensive line he described as “known” for the Cowboys.

I asked Connor Williams about Ezekiel Elliott’s tweet to him, announcing he’s going for the rushing title again. He answered with his thoughts on playing with Tyron Smith and this “known” #Cowboys offensive line. https://t.co/FKib4fykzl

Williams fits the Cowboys athletic profile well, a smasher against the run that will play well in space and on the move. Like Leighton Vander Esch, this is an impressive young man with a bright future in the NFL. 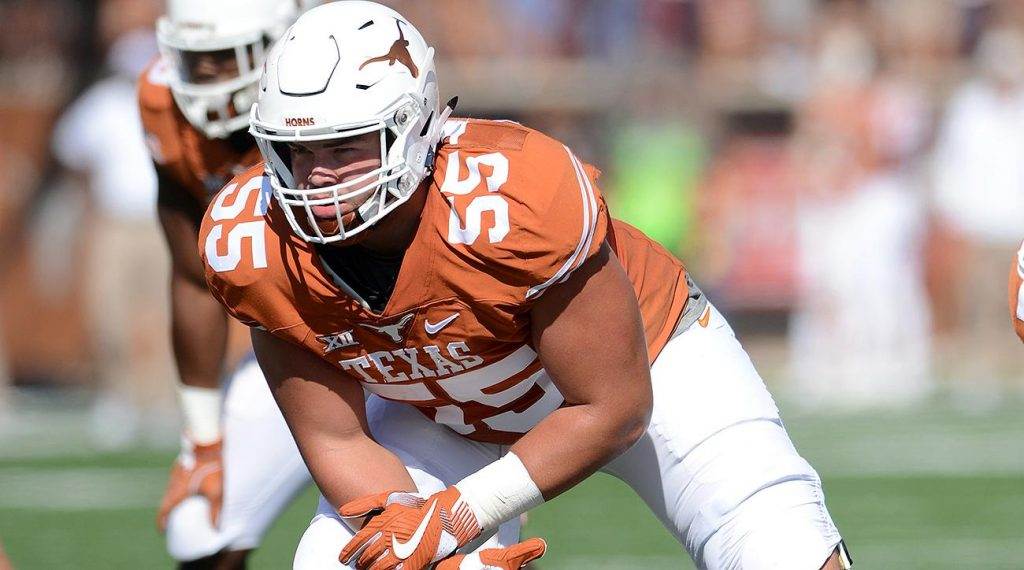 This should be said about Connor Williams wherever he may have been drafted, but being selected by his home state team to anchor the LG position is as good as it gets for Williams.

Connor did tell the media that he filled out Tyron Smith’s jacket, an impressive feat to match the body type of the league’s most athletic left tackle.

The Cowboys were prepared to enter the second and third rounds of the NFL Draft with their needs at guard and wide receiver unaddressed. Little did we know, they would hit a home run with the versatile and resilient Connor Williams at 50th overall, before stealing Colorado State WR Michael Gallup in the third.

Connor Williams wore Tyron Smith’s sports coat to the first round of the #NFLDraft. He was drafted a day later to play immediately next to a player he’s studied out of Texas.

With their first three draft picks, the Cowboys have filled out roster needs with a trio of terrific prospects that are all understandably excited to be a part of this franchise. For a small-town player like Vander Esch, this realization overwhelmed him following the 19th overall pick.

For Connor Williams, I never got the sense he took in the full meaning of what his journey back to football prominence at Texas concluding with the Cowboys will mean to this team. That moment will come, perhaps only when he’s lined up shoulder to shoulder with Tyron Smith as the perfect Cowboys starter – the fourth guard taken in this Draft, but the right kind of guy that Dallas should be ecstatic about.

Tell us what you think about “For Connor Williams, Being ‘Shoulder to Shoulder’ with Tyron Smith is Nothing New” in the comments below. You can also email me at Sean.Martin@InsideTheStar.com, or Tweet to me at @SeanMartinNFL!