The Dallas Cowboys approached free agency with a familiar focus on re-signing their own players. While this isn't the flashiest way to add talent, it is a proven way to compete, especially considering the prospects the Cowboys have developed well enough to offer second contracts.

For as many homegrown players as the Cowboys have leading the way, they did allow the likes of Anthony Hitchens, Jonathan Cooper, and Brice Butler to depart this offseason.

Whether through signing other free agents or drafting, the Cowboys are weeks away from sorting out who fills in for these players on their deep 90-man roster. Here are my predictions for the early favorites in Dallas when looking to fill in these roles.

When Orlando Scandrick defected from the Cowboys to the Washington Redskins, he left behind a void that covered 85% of last season's defensive snaps. Scandrick's effectiveness as the Cowboys slot cornerback can be fairly called into question despite his veteran status, losing a step over the last few seasons.

Turn the page to 2018, and the Cowboys are in position to have some of the best depth at slot CB in the league. Under new Passing Game Coordinator Kris Richard, this potential has already been on display at the Cowboys previous OTAs and mini camp.

Last year's standout rookie Jourdan Lewis could progress even further by kicking inside for his second season. To earn this role vacated by Scandrick, he'll have to first beat out Anthony Brown. Looking to recapture his form from a stellar 2016 season, Brown plays with the speed and awareness that the Cowboys expected from Scandrick in his prime.

Now, they can expect to hold up at cornerback without Scandrick thanks to Anthony Brown, as well as Jourdan Lewis and Duke Thomas.

It's unfortunate the Cowboys don't have bigger shoes to fill when it comes to Benson Mayowa, moving on to the Arizona Cardinals after totaling seven sacks in two seasons for the Cowboys. Mayowa was never able to truly hold down the starting job at right defensive end, a position the Cowboys will still deal with uncertainty at in Oxnard.

Awaiting the reinstatement status of Randy Gregory, the Cowboys also have Tyrone Crawford and Taco Charlton prepared to play in rotation at RDE. In terms of replacing what they had in Mayowa, rookie Dorance Armstrong fits the mold well.

Both athletic rushers with length and flexibility on the edge, it's unclear how much Armstrong will be asked to contribute in his first season. Having a similar plan after signing Mayowa would have been ideal for the Cowboys, but moving forward with this depth across the entire defensive line is an overall team strength for DC Rod Marinelli to maximize.

Working with a defensive end like Armstrong, who peaked with 10 sacks as a Junior in 2016 at Kansas, Marinelli and the Cowboys should look at anything they get out of this ‘high ceiling' prospect as an added bonus in 2018.

If this season is truly going to be a prove it year for Quarterback Dak Prescott, the Cowboys must avoid the major injuries that completely wrecked his offense a year ago. Most notably, this offensive line did not play up to their own standards when Jonathan Cooper and Tyron Smith were out.

Committed to protecting Prescott again, the Cowboys prioritized their backups at tackle and guard to bring in Cameron Fleming and Marcus Martin. Fleming will serve as a replacement to Byron Bell, who finds himself with the Green Bay Packers now.

Where Bell struggled at left tackle with his footwork and overall movement ability, Fleming is a proven tackle that knows how to win, signing in Dallas by way of the New England Patriots. He is the ideal swing tackle to be ready for either Smith or La'el Collins, something never said about Bell.

This one is as easy as it gets, and part of the reason I named Williams the Cowboys rookie with the most upside last week. Now with the San Francisco 49ers, Jonathan Cooper left behind a starting job at left guard for the Cowboys in free agency.

With no intentions on handing this job to Marcus Martin, the Cowboys couldn't pass on Texas standout Connor Williams at 50th overall in the NFL Draft. Keeping Williams in the state of Texas is much more than just a feel good story for everyone familiar with what he went through to battle back from injury, but one with massive implications on the Cowboys offense.

Idolizing Tyron Smith throughout his journey into football, Williams will now team up with Smith on the left side of the Cowboys offensive line. The results should be stunning for this athletic and cohesive front line, especially when factoring in Travis Frederick on Williams' right side, Zack Martin, and La'el Collins.

Primarily a special teams ace for the Cowboys, Kyle Wilber followed Rich Bisaccia to Oakland this offseason. Joining Keith Smith with the Raiders, Wilber also leaves behind a depth option for the Cowboys at both SAM linebacker and defensive end.

While rookie Chris Covington lacks the strength and experience to play defensive end, he will have to emerge on special teams to make this roster as a sixth round pick. In doing so, Covington would be absorbing the primary duties of Wilber while developing as a backup at linebacker — just as Wilber was if called upon. 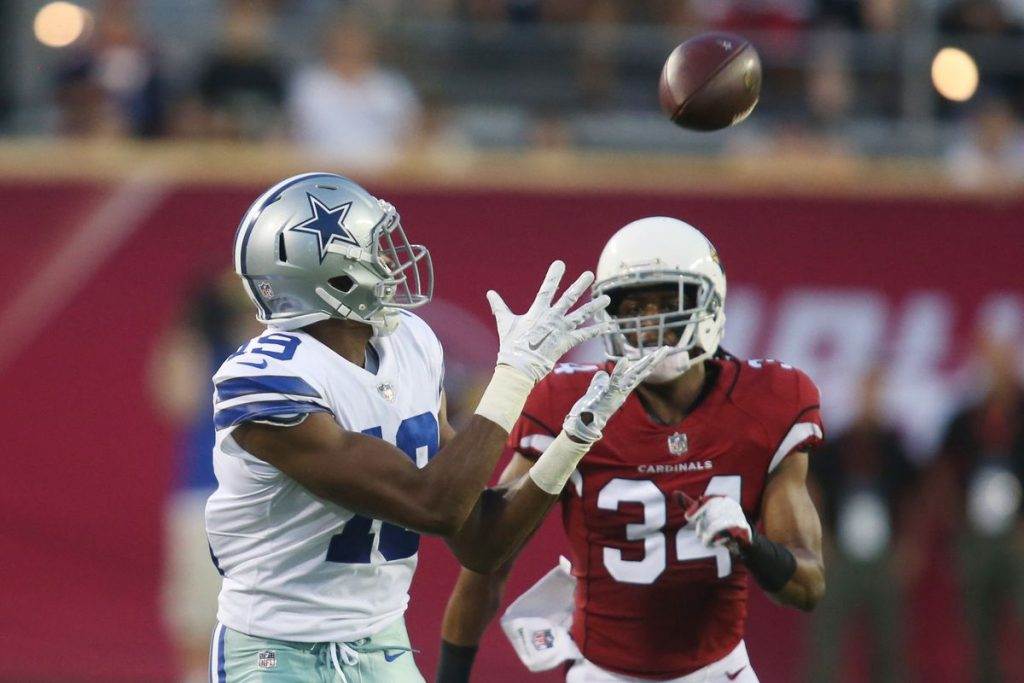 It's common knowledge at this point that the Cowboys are going with a receiver-by-committee approach for 2018. Most notably replacing Dez Bryant, who remains a free agent, the Cowboys have also found speed on the outside with Deonte Thompson and rookie Cedrick Wilson.

Thompson is a very similar player to now Cardinals WR Brice Butler, who never quite found his footing in the Cowboys offense. The same has been said about Thompson through multiple teams, seen last with the Bills where he caught 38 passes for 555 yards in 2017.

Like Butler, Thompson has no problem getting over the top, and is even more refined in his ability to run intermediate routes. The Cowboys have plenty of use for Thompson's speed should they choose to use it, something they couldn't consistently do with Butler.

Yet another Cowboys free agent that signed with the Cardinals this offseason, replacing Benwikere comes down to who makes the final 53-man roster for the Cowboys. Rarely contributing on defense as an average depth player, any backup cornerback that actually makes this team is effectively the “new” Benwikere.

I'll take Marquez White's year of experience and toughness to earn him a spot once again over the likes of Donovan Olumba and Kam Kelly. Even if White doesn't provide the special teams snaps that Benwikere could, he is a capable backup at both cornerback and safety, which is more than enough for the Cowboys to consider this an upgrade at the position.

Perhaps the biggest name to leave the Cowboys this offseason, Anthony Hitchens is reunited with Matt Eberflus as a high-profile signing with the Colts. Not re-signing a player as solid and reliable as Hitchens forced the Cowboys to rebuild a bit at linebacker, doing so by spending the 19th overall pick on Leighton Vander Esch.

Sure, Vander Esch may be getting the first crack at Hitchens' old MIKE LB spot, but I believe improvements from Jaylon Smith this season will closely resemble what Hitchens leaves behind.

Practicing without a brace and preparing for a monster season, the sky is now the limit for Smith in returning to his college form. At his best, it won't matter where the Cowboys deploy Smith, as his reaction ability and power against the run will help this defense get off the field.

The same was often said about Anthony Hitchens, who quietly handled duties at all three linebacker positions at different times in Dallas.

Never doing without their fullback, the Cowboys traded for Jamize Olawale this offseason from the Raiders — where Keith Smith joins Kyle Wilber and Ryan Switzer as former Cowboys. Smith justified his spot on the depth chart at fullback very well, playing 85% of the Cowboys special teams snaps while being an emergency option at linebacker.

Jamize Olawale may not be an option at linebacker for the Cowboys, but the team should feel good about their depth elsewhere at this position. The bigger problem spot for Dallas exists at tight end, where Olawale can help relieve the need for a consistent threat by catching passes out of the backfield.

Olawale has certainly been an under the radar player this offseason for the Cowboys, but as we get a feel for what they have planned for him in Oxnard, Olawale should help the Cowboys move on from a player well-respected by coaches and fans in Keith Smith.

For the most part, the Cowboys have potential upgrades in place for their class of departed free agents. Each season's roster turnover is a humbling reminder of how important it is to capitalize on opportunity in the NFL. Realizing this despite being such a young team, the Cowboys signed the right veterans in free agency to avoid devastating injuries in 2018.

It will take expected contributions from veterans, draft picks living up to the billing, and free agents stepping up quickly for the Cowboys to contend this season. The pieces are in place for this roster to develop into one of the league's most talented by the end of the year however, where the best offensive line and running back in the sport become so much more important.

Sean, one of your better articles. Going try the roster free agent by free agent your article emphasizes how important it is to build a deep roster across the offense defense and S/T. I like what the front office has done in replacing players with upgrades in talent, youth AND experience. I really like the Fleming signing and hopefully that means goodbye to chaz green