The Dallas Cowboys (7-3) are coming off a miserable performance against the Kansas City Chiefs last Sunday, losing 19-9. They face a quick turnaround and will be playing the Las Vegas Raiders (5-5) on Thanksgiving Day. Both teams are coming off bad losses as the Raiders took a beating at the hands of the Cincinnati Bengals 32-12, their third straight loss.

The Cowboys will again be without star-wide receiver Amari Cooper as he is on the Reserve/COVID-19 list. They may also be without fellow stud wideout CeeDee Lamb after he suffered a concussion in Sunday's loss to the Chiefs.

If Lamb is to miss the game, Michael Gallup, Cedrick Wilson, and Dalton Schultz will have to step up. With Cooper out and Lamb missing the second half of the game on Sunday, the trio combined for 25 targets. These three will need to produce if the offense is going to bounce back.

The real key to this game for the Cowboys offense will be establishing the run. The offense has been struggling to run the ball, and that has been a critical factor in the offense failing to show up in two of the last three games. Over the past six weeks, first-down runs for the Cowboys have produced a success rate of just 28.7%.

Failing to produce on first down will always make the best offenses look stagnant. Fortunately for the Cowboys, the Raiders struggle to stop the run. They are the 29th ranked team in the NFL against the run, giving up 132.1 yards per game.

The Cowboys may also be getting a massive boost to the offense as Tyron Smith could be returning after a three-game absence due to an ankle issue. On Tuesday, Cowboys Vice President Stephen Jones said, “Barring some unforeseen setback this week, he should be ready to play this Thursday.”

If Smith does come back, watching what the Cowboys do with Terence Steele and La'el Collins will be interesting. Might Steele continue to work as the right tackle? Or will Collins start at right tackle?

The Raiders pose a threat rushing the passer as they rank 11th in sacks per game with 2.4 and seventh in sacks per game on the road with 3.0. The Raiders pass rush unit is ranked the highest per PFF with a grade of 83.9. So, getting back Smith would be huge for the Cowboys as the offensive line has struggled mightily without him, particularly last week allowing five sacks against the Chiefs.

On defense, the Cowboys could have their hands full with the Raiders' third-ranked passing attack behind the arm of Derek Carr. However, the Raiders offense has struggled as of late, failing to score more than 16 points in any of their last three games.

Still, the Cowboys need to be concerned about the Carr to Darren Waller connection. Waller had 116 yards on seven catches last week and will be a tough cover for Dallas.

All in all, Dallas is the more talented team, and the Raiders have faced off-field issues all season long, and it seems like they may finally be catching up with them. If the Cowboys can protect Dak Prescott, the offense could be in store for a bounce-back offensive performance.

With the season getting into crunch time, a convincing victory is just what the Cowboys need to get them back on track. 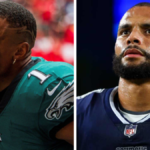 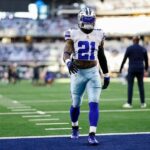