Regardless of how many regular season or postseason wins a great quarterback gets, he will ultimately be judged by how many Super Bowls he leads his team to, it's that simple. The NFL is a tough league to win in so any quarterback that wins one championship is considered blessed. However, there's an exclusive club for those with multiple Super Bowl wins.

Only 12 quarterbacks in league history have won at least two titles, and the Dallas Cowboys have two of them. Hall of Famer Roger Staubach or “Captain Comeback” as he's referred to, won the first two Super Bowls for the Cowboys back in the 1970s. Troy Aikman, who is also a Hall of Famer, brought home three titles and was a huge part of the Cowboys' dominance during the 1990s.

NFL.com writer Adam Rank recently ranked every quarterback with multiple Super Bowl titles. Let's take a look at where Aikman and Staubach landed on his list and what he had to say about both legends. 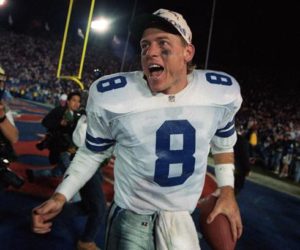 “You wonder, had a few breaks gone his way during the 1970s, maybe Staubach would be in the conversation for greatest quarterback of all time. He breezed past the Dolphins (Super Bowl VI) and Broncos (Super Bowl XII) with relative ease, but the Steelers (Super Bowls X and XIII) were a riddle he just couldn’t solve. Still, being able to be a part of this list is rather impressive. And like [Jim] Plunkett, Staubach is the rare Heisman Trophy winner who was also a Super Bowl MVP (in Super Bowl VI). (And I know it’s driving you crazy, so I’ll save you a Google and tell you the other two are Marcus Allen and Desmond Howard.)”

It's no surprise that Tom Brady (seven Super Bowl wins) and Joe Montana (four Super Bowl wins) were ranked first and second on the list. John Elway came in third followed by Terry Bradshaw and Bart Starr to round out the top five.

Matthew Lenixhttps://mlenixsctx.wordpress.com/
I write dope stuff about the Dallas Cowboys and what not.
Previous article
Dan Quinn Named 2021 Assistant Coach of the Year by PFWA
Next article
Cooper Rush Provides Affordable Security as Backup QB in 2022