Contract seasons for any player provide a motivation that can fuel extraordinary performances on the field. The Dallas Cowboys have one of their top defensive players in that situation currently, Defensive End Randy Gregory. After signing a one-year extension last September that could pay him up to $2.1 million in 2021, Gregory reminded the NFL world of his talent with 3.5 sacks and three forced fumbles in the 10 games he played in last season.

A few weeks ago during mandatory minicamp, Gregory was asked about how he would go about handling the final year of his deal. The former second-round pick is taking the everything is earned not given approach.

“Same way I have always gone about it,” Gregory said, via The Athletic. “I should have already had a new contract. I was still on my rookie contract last year. That is kind of crazy to think about, but I understand it’s a contract year. It’s all about earning everything now. I’m going to do that on the field. Barring injury, I think I will be all right. I love it here. I love the owners. I love the staff. I love the players. When that time comes, we will talk about it. But from where I came from I am not thinking about a damn contract right now before the season starts. I still got a lot to do.”

Gregory may have played well in 2020 but he did so with only 271 snaps which accounted for just 25 percent of the Cowboy's defensive plays for the season. However, in 2018 when he played in 14 games and logged 457 snaps, Gregory amassed six sacks (second on the team), two forced fumbles, a fumble recovery, and 15 quarterback hits. Simply put, when he's on the field for an extended period, he produces.

As he enters his seventh NFL season, Gregory comes in as a projected starter (only career start came in 2020) opposite DeMarcus Lawrence. This will certainly bolster his snap count and allow his true talent to be shown under new Defensive Coordinator Dan Quinn.

The man in charge of turning around one of the worst defenses from a year ago is familiar with Gregory. During his first season as the Atlanta Falcons head coach in 2015, Quinn attended a workout in Lincoln, Nebraska during the pre-draft process, and the former Cornhusker left quite the impression on his new defensive coordinator.

“I was so impressed by him,” Quinn said, via Brianna Dix of D210 Sports. “I’ve had my eye on Randy [Gregory] for a long time. In fact, I went out to Lincoln during the draft process and had a chance to work him out at school and we bonded that time and to go, I thought ‘Man I so badly wanted to coach him,’ because I saw all the traits, all the speed. He’s got this unique ability to go full speed and he can bend on the edge, and he’s got such flexibility to bend. When I had a chance to get here, he was one of the first people I wanted to get into contact with and we hit it off immediately because we had a relationship when I went to Nebraska to see him. During that time from what I’ve seen from him is the physicality, he just looks so much different. He’s bigger, he’s faster and stronger than he’s ever been. That really translated onto the field.”

Quinn hasn't wasted time catching the attention of Gregory either.

“He's a player's coach,” Gregory said of Quinn a few weeks ago. “He knows how to relate to the guys. I'm really excited to have him in the next leg of my career.”

With a rejuvenated career, a new contract to earn, and a defensive coordinator who believes in what he brings to the table, Gregory is poised to have his best season in Dallas yet, and further cement himself as one of the most important links on the Cowboys defensive chain.

I hope we sign Gregory during training camp, or at least by the beginning of the season!! We can’t wait until the end of the season cause if he has that break out year like everybody expects then we won’t be able to afford him!! We need to sign him now while we can still get him relatively cheap!! But that’s just my opinion!!

I like Randy. He appears to be articulate and intelligent to go along with his physical talent. He has come a long way, with his well known setbacks, but seems to have that behind him.now. I give Cowboys credit for sticking with him. Some other teams may have given up on him and not without justification. Hope he has his best years going forward, which would take care of his compensation.

How he acts and reacts off the field will go a long way in dictating his on-field contribution.
I am proud that he seems to have gotten his life together. I just don’t want him to be dead at thirty-five of a drug overdose. Football isn’t that important, celebrate life!
I’ll probably never trust him to be there for the Cowboys on Sunday. But I do wish him well.
It will be interesting to see how much loyalty he shows to the team that stood beside his, through thick and thin.

I’m rooting for Randy. Unfortunate his career was derailed by smoking herb. Players have done much worse and gotten off much easier. We desperately need his pass rushing prowess. Pretty thin after him and Lawrence. 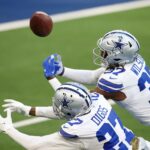 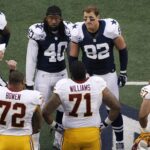