Dallas Cowboys Owner and General Manager Jerry Jones called a press conference for Friday at noon yesterday, just the latest development from an unusually busy Cowboys team as they continue to prepare for week nine against the Tennessee Titans. With one new player added in Amari Cooper and one first-year coach fired this week, the Cowboys looming announcement has Cowboys Nation on high alert.

They should expect the Cowboys to use this time to announce their latest ring of honor inductee(s), according to a report from the Dallas Morning News.

Sources: Cowboys will announce unknown addition to Ring of Honor in news conference https://t.co/auWHbOJJxl via @sportsdaydfw

This report lines up with early speculation that the Cowboys would be addressing their ring of honor at today's presser. So too do the schedules of both former Cowboys Quarterback Tony Romo and Tight End Jason Witten.

Jones confirmed with 105.3 The Fan in Dallas last month that Romo would indeed be a Cowboys ring of honor member.

Jerry Jones says that @tonyromo will be in the #DallasCowboys Ring of Honor, he is just unsure of a timeline for Romo's induction as of now.

In the last three weeks, Romo has called the Cowboys emphatic home win against the Jaguars and brutal loss at the Redskins before working a Bears home game against the Jets last Sunday – earning a week off this Sunday.

Romo's availability to return to AT&T Stadium once again could reunite him with Witten, who followed in his quarterbacks footsteps to enter broadcasting this year. Witten is working his first Cowboys game for ESPN, as the team will appear on Monday Night Football for the first time since week three of 2017.

Cowboys vs. Titans will be the first Monday night game at AT&T Stadium since the Cowboys defeated the Lions in week 16 of 2016. In that game, Witten caught a touchdown pass from Dez Bryant as the Cowboys rolled 42-21. 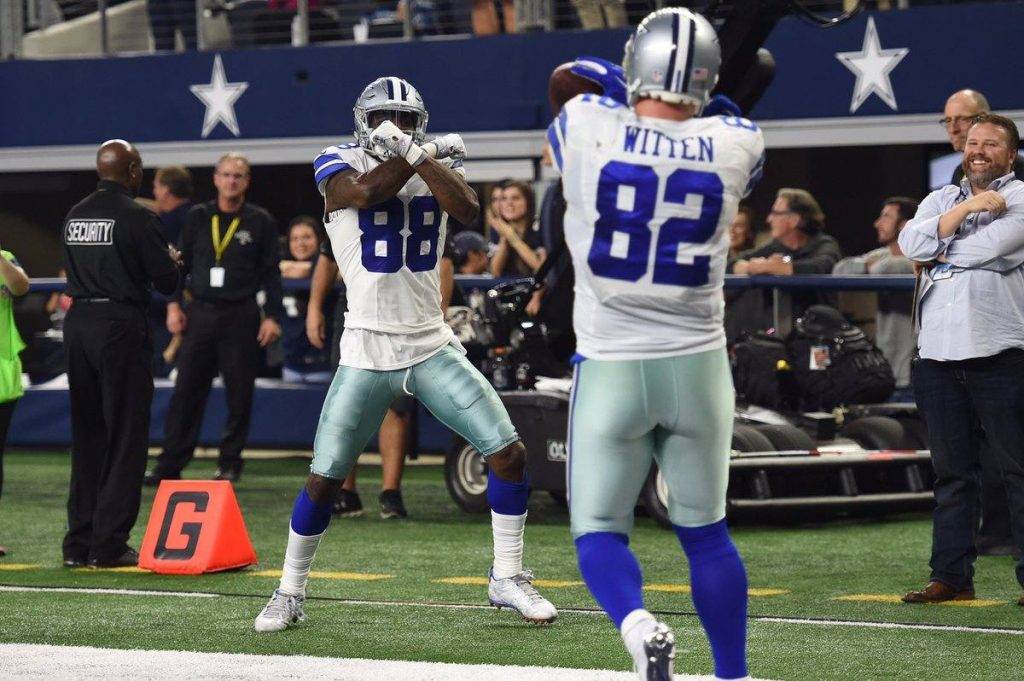 In the hallways of The Star, where the Cowboys will make today's announcement, there is hardly a divide in respect that both players warrant as former cornerstones to the franchise. Such a split may occur when the two are considered for the Pro Football Hall of Fame, putting impetus on the Cowboys to honor both very shortly after their retirements.

The current 2018 Cowboys are serving as a great reminder of how quickly rosters can turnover in the NFL, needing to make a move to help their new quarterback immediately after Dak Prescott's 22 of 35 performance with one turnover-turned-touchdown in Washington.

Amari Cooper will make his Cowboys debut in front of his home fans against the Titans.

Even less prepared to enter this season without Witten, Cowboys Tight End Geoff Swaim has yet to practice this week, leaving the team with only rookie Dalton Schultz, Blake Jarwin, and Rico Gathers at TE for Witten's return to Dallas.

Still, with the NFC East in reach at 3-4 and the Cowboys 3-0 home record positioning them for a win on Monday, an inspiring ceremony for two players that much of the Cowboys roster has taken the field with could be all this young team needs to respond off the bye week.

Such a plan from the Cowboys will not be publicly known until later today, but the team certainly knows how to remain relevant in the news cycle, set to dig into their past to carry them through the weekend – having not played a game in 12 days.

Friday is shaping up to be one of Cowboys nostalgia.

If you're like me, you probably felt weird waking up this morning because you realized that you won't have to worry about what time...