Two games into a seeming breakout season, Dallas Cowboys Wide Receiver Michael Gallup will now be out for the next 2-4 weeks after having surgery to repair a torn meniscus. He suffered the injury late into the Cowboys' victory over the Washington Redskins yesterday.

An MRI revealed the extent of the injury today. There were hopes that Gallup had only suffered a contusion, but unfortunately he will be out at least a couple of games after requiring this minor knee procedure.

Sources: #Cowboys promising WR Michael Gallup is having arthroscopic surgery to trim his meniscus, knocking him out 2-4 weeks. No structural damage besides the meniscus tear, so the return should be quick.

The Cowboys still have Amari Cooper and Randall Cobb as a strong starting duo. They also hope to get Tavon Austin back this week after he was inactive in Washington with concussion issues.

Gallup's absence could be big for Devin Smith, who had a 51-yard touchdown catch against the Redskins and should see more work in the coming weeks. It also may prompt Dallas to keep prospect Cedrick Wilson, just called up from the practice squad a week ago, on the 53-man roster a while longer.

Despite this depth, Michael Gallup will still be missed for however long he's out. Hopefully he can return on the quick side of the projection and keep his 2019 momentum going.

Gallup was on a tear, but will be mending on the shelf, insert D.Smith, the speedster from Ohio State, & promote C.Wilson, this arsenal is deep and destined for greatness, Gallup was making those L.Swan type catches, please hurry, get well soon.

Fortunately the Boys seem to be pretty deep int WR department. Should be alright, although he was having a good run.

I think we may be understating young Gallup’s importance. Thank goodness the scheduling Gods seem to be looking favorably on us, with games against the Fins, Saints minus Brees and the hapless J-E-T-S. I hope Gallup can recover, it is truly amazing how quickly these players can recover in only weeks from surgeries. Good luck, Michael we need you. 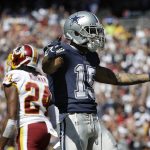 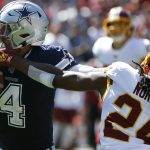