For years, Sean Lee was not only one of the best linebackers in the league but he was the unquestioned leader and best player on the Dallas Cowboys defense. His ability on the field has never been an issue but rather his availability to stay on it and produce at the elite level everyone had grown accustomed to seeing from him.

With Linebacker Leighton Vander Esch having missed five games due to neck issues, with the latest putting the rest of his 2019 season in doubt, the old veteran keeps showing he's up to the challenge and can plug that hole whenever needed. 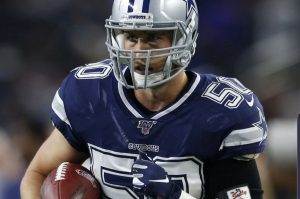 After the Los Angeles Rams tied the score at seven the Cowboys took control by building a 21-7 lead. The Rams were looking to gain some momentum before halftime, however, Lee would have known of it. In the video below, Lee takes advantage of a bad throw from Jared Goff and gets his first interception since 2017. Not only does he create the turnover, but he returns it to the nine-yard line and sets up All-Pro Ezekiel Elliott's second touchdown of the game, and essentially put the Rams out of their misery with a 28-7 halftime lead.

Lee would be mobbed by his teammates after picking off Goff, and it meant a lot to “The General” as he's referred to by Cowboys fans worldwide.

“Not to get sentimental, but seeing the guys run on the field after I had that pick is something very special to me,’’ Lee said. “That’s something I’ll remember for a long time.’’

This wouldn't be the only impactful play Lee would make in this game. After the Cowboys had firmly established their dominance with a 31-7 lead with just under 11 minutes to go in the third quarter, Lee would again make his presence known. In the video below, Lee does a great job of taking on the block from Todd Gurley and sacks Goff for a 12-yard loss. This was his first solo sack since December of 2015 vs the Washington Redskins.

Sunday's game wasn't the first time Lee has shown that he still has a little something left in the tank. Back in Week 7 vs the Philadelphia Eagles, Vander Esch exited the game early after suffering a neck injury, and Lee stepped up nicely. He was arguably the best player on defense for the Cowboys as his seven tackles tied Jaylon Smith and Jeff Heath for the team lead, and the Cowboys rolled to a 37-10 victory. A week later, the argument can be made he led the defense again as his 12 tackles tied Smith for the team lead. The Cowboys again dominated 37-18.

This is the type of value you can't put a price tag on. Most teams would be swimming upstream without a paddle losing a player of Vander Esch's caliber at linebacker. Fortunately, the Cowboys have the best insurance policy at the position in the league with Lee. As mentioned before, it doesn't look like Vander Esch will play anytime soon, so Lee stepping up in his absence is very important to this defense. The Cowboys can wrap up the NFC East with a win vs the Eagles this Sunday. In order for this to happen, the Cowboys will need continued contributions from their elder statesman in the linebacker room.

Matthew Lenixhttps://mlenixsctx.wordpress.com/
I write dope stuff about the Dallas Cowboys and what not.
Previous articleEzekiel Elliott Performs Big, has 6th 100-Yard Game of the Season
Next articleKai Forbath Brings Stability to the Cowboys’ Kicking Game