The Dallas Cowboys will look to win their fifth consecutive game against the New England Patriots on Sunday. Ezekiel Elliott, Tyron Smith, Randy Gregory, and Trevon Diggs were all listed as questionable during the week. That's four key starters they will be needed for a tough road test in Foxboro despite the 2-3 record of the Patriots.

Fans of America's Team can breathe easy though. According to NFL Network's Ian Rapoport, they are all expected to play.

Elliott suffered a rib injury after landing on the pylon when he went out of bounds last Sunday against the New York Giants. There's still some soreness but not enough to keep him out. Elliott has only missed one game due to injury in his career.

Smith made Cowboys fans everywhere gasp when he had to get an MRI on his neck which cost him 14 games in 2020. However, it was just precautionary which makes sense considering his history of neck issues. Smtih said he would play all 17 games this season and, for now, that looks to be true.

Gregory dealt with a knee issue during the week. According to Pro Football Focus, Gregory was credited with a team-high nine pressures against the Giants and also racked up six hurries and three quarterback hits. He recorded two sacks the previous week against the Carolina Panthers and the Cowboys will need him to apply pressure to rookie Mac Jones this week.

Diggs recorded an interception for the fifth straight game against the Giants in Week 5. However, he also suffered an ankle sprain that he nursed all week. The precaution paid off and he'll look to add to his league-leading six interceptions and 10 passes defended against the Patriots. 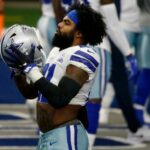 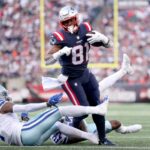