The Cowboys found out they were NFC East Champions about 90 minutes before kickoff of their Sunday Night Football matchup with Washington. But there's no letup or letdown from Dallas tonight; America's Team is on fire right now with a 42-7 halftime lead over the Football Team.

The 42 first-half points for the Cowboys is the most single-half points in franchise history, according to the NBC broadcast. And that's not the only talk of records tonight.

Trevon Diggs got his 11th interception of the season on Washington's first offensive play, becoming the receiver on a deep sideline pass and outracing Terry McLaurin for the ball. The pick ties Diggs with the great Everson Walls for the single-season franchise record.

Zeke's also got a touchdown on the ground, looking a little quicker tonight with 30 rushing yards on just six carries.

Both sides of the ball are getting it done in this one. DeMarcus Lawrence tipped a ball to himself for an interception and returned it for the pick-six. Micah Parsons recorded another sack and Jayron Kearse also got to Taylor Heinicke.

And if the beating they're taking from the Cowboys wasn't bad enough, Washington players were even fighting each other on the sideline. 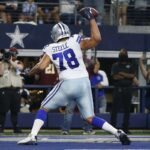