The Positives and Negatives After 3 Weeks

We’re three weeks into the 2020 season and the Cowboys are 1-2. If not for some late-game heroics and an onside kick, they could just as easily be 0-3. Having a bulk of their starters on short term injured reserve, and others being week to week hasn’t helped. Players like Chidobe Awuzie, Sean Lee, Tyron Smith, La’el Collins, Leighton Vander Esch, and Blake Jarwin being unavailable is showing its effect on the field on both sides of the ball in a big way.

In the grand scheme, the fans and the team are not panicking just yet. As it stands, the Cowboys are still in the driver's seat in the NFC East as the other three teams (Washington, Philadelphia, and New York) are all struggling too, so everyone can relax… for now.

There’s been plenty of good with a plethora of bad to the start of the season. Having no preseason is showing on the field how rusty which players and position groups are. Even more important is that it has shown where the team is strongest and weakest from this point.

Even though the main concerns have been on defense and the highlights have been on offense, it’s not as bad or as good as it may seem. We need to differentiate the two. 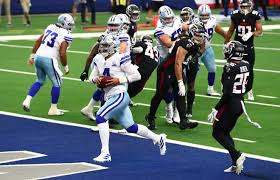 In a year in which the Cowboys put a franchise tag on their quarterback, and added CeeDee Lamb to the offense, there were no more excuses for Dak Prescott. He has been asked to ball this year and he’s done just that.

Through the first three weeks of the season, Dak Prescott leads the league in passing yards (1,188), is eighth in QBR (76.3), and has eight total touchdowns on the season in both passing and rushing. If not for a questionable pass interference call at the end of the LA Rams game, and a myriad of things gone wrong versus Seattle, he’d look like a sure-fire MVP candidate on a 3-0 team.

From here on out, it appears like the offense is going to run through Prescott, and with the accuracy and fearlessness he’s shown to spread the ball, there’s no reason not to feel confident.

The lone bright spot in a murky secondary has been this year's second-round draft pick, Trevon Diggs. Diggs has had his struggles and given up plays, not due to blowing coverage but because of a great pass or great play on the ball by the receiver.

Diggs has been sticky in coverage, not letting the receiver he’s covering stay open and making the catch difficult. Even going as far as to make a play after the catch, i.e. his forced fumble against D.K. Metcalf against Seattle, saving a would-be touchdown.

Asking a rookie to be your number one corner is a big task but Diggs has taken on that challenge well. If he continues to progress, he could become the shutdown corner the team hopes he could be. 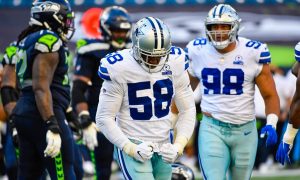 Who would’ve thought that a player who hasn’t played since 2015 would lead the league in sacks? Because that’s the case for Aldon Smith who currently leads the league with four. The offseason move that raised a lot of eyebrows is turning into a steal for the Cowboys who would only have to pay Smith $4 million if he were to get 10 more sacks, which he’s on pace to eclipse.

Not only was Aldon Smith the most questionable move of the offseason but so was the announcement that he’d be a starter at the SAM linebacker position. Normally a hand-in-the-dirt kind of player, making the transition to standing outside linebacker has become a welcomed change for a defense needing playmakers. A change that could see him getting a lucrative extension.

All the talk this off-season was about this new receiving trio of Amari Cooper, Michael Gallup, and Lamb. Not only have they produced like expected, but the entire receiving corps is becoming a big part of the game plan.

Not only are the three main starters living up to the hype but the backup receiver, Cedrick Wilson,  and the new number one tight end, Dalton Schultz, are also contributing in the passing game.

As it stands today, these are the receivers' numbers:

Going forward it looks like the passing game will be the focal point of the offense and not only could the receivers' wishes of three 1,000 yard receivers come true but they could have potentially six or seven players who eclipse 600 receiving yards on the season, showing a true spreading of wealth.

In the past, the Cowboys would panic if one of their starting offensive linemen would go down. This year, not only did long-time All-Pro Center Travis Frederick retire, but staring Right Tackle La’el Collins has started the season on IR and starting Left Tackle Tyron Smith has been sidelined due to a neck injury.

Steele has shown some obvious growing pains but considering what they’ve asked of him to do right out the gate, and start on the line after no preseason is respectable. He still needs to develop but has shown a lot of flashy potential.

Brandon Knight has been very impressive. Filling in at both tackle spots, giving Dak Prescott and the offense a sigh of relief on the outside. With the uncertainty of Collins and Smith, Knight will be a reliable fill-in player and looks like he could be an eventual full-time starter one day.

Finally, we got our first look at the fourth round rookie Tyler Biadasz. When Steele went down, Zack Martin and Joe Looney shifted right and we saw the future of the center position. He looked good in the passing game and picked up blitzes well. Losing Frederick was a huge blow but we probably won’t have to wait for his replacement as long as some may have thought. 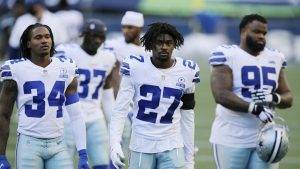 To say the secondary has been bad is putting it lightly. While they’re not statistically the worst, their inability to make a play on the ball and the amount of times receivers have been open has been staggering. Trevon Diggs has been a welcomed addition but he’s the lone glimmer on a black canvas.

The losses of Chidobe Awuzie and Anthony Brown hit harder than expected but having them replaced by Daryl Worley and a disappointing Jourdan Lewis has not yielded any positive results from the slot or the outside.

Behind the corners, the safety position is still underwhelming. A position that’s been ignored year after year and will likely continue to struggle.

Xavier Woods has been solid but hasn’t shown he’s taken the next step as people wanted. Darian Thompson was good enough for the Cowboys to release Haha Clinton-Dix but that shouldn’t make him the de facto starter, especially with the results he’s given so far.

Given that the Cowboys appear to not want to look outside the team to improve the secondary, players like Donovan Wilson and Reggie Robinson could be given looks since the secondary can’t get much worse.

Where does Brandon Carr factor into all of this? It’s been said time and time again that when he moved to safety full time he looked better than he ever did at corner. Is he not healthy? Is who they got out there already really the best the team can do?

It's still early but there are way more questions than answers at this point and with almost a quarter of the season gone, they need to be answered sooner than later.

Lack of a Pass Rush

As mentioned earlier, Alden Smith leads the league in sacks so far this season. However, outside of him, there’s been a serious lack of pass rush on the defense.

Outside of Smith, only Everson Griffen and Antwaun Woods have registered a sack this season, each with one. In an offseason that was focused on beefing up the defensive line and adding depth to the position, it’s unacceptable that the team only has six sacks, the majority all to one player. Veterans like DeMarcus Lawrence and Tyrone Crawford are too good to not be a bigger factor in the passing game.

Granted, the Cowboys have faced three good quarterbacks in Jared Goff, Matt Ryan, and Russell Wilson, but all three have had injuries along the offensive line, which premier defensive linemen should eat up. New players like Everson Griffen or Dontari Poe should be taking full advantage. 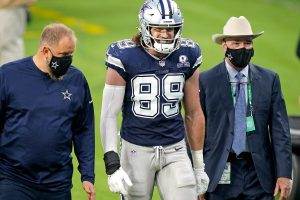 The injury bug is something that affects every team, every year. This year though, the bug just keeps on biting.

The number of players that the Cowboys have on either short-term IR, long-term IR, or week to week could almost fill a team's starting offense or defense.

The list is long: Gerald McCoy, Blake Jarwin, Sean Lee, Leighton Vander Esch, Tyron Smith, Chidobe Awuzie, Anthony Brown, and La’el Collins are either gone for the season or are uncertain of when they will return.

With the new injury rules due to the Coronavirus, teams only need to place a three week IR tag on players eligible to come back. Some player's injuries are going to take longer than three weeks to heal properly and the team will have to go with who’ve they’ve got until their key players come back.

Not So Special Teams

Aside from the onside kick and subsequent game-winning field goal, the Cowboys' special teams have been awful. It doesn’t matter which facet, they’ve all been disappointing.

The team running a fake punt pass on 4th and one, and a fake punt run on 4th and five, and not converting on either has been a metaphor for the season so far; sloppy and not good enough.

Shane Carterhttps://dawgpounddaily.com/author/scarter1/
Lifelong Cowboys fan, who doesn’t mind telling the harsh truth. I’ve got a Bachelors Degree in Electronic Media and Communications from Texas Tech University. I welcome all opinions but I will shut down any troll.
Previous article
There’s No Quick Fix To The Cowboys Defense
Next article
Dallas Cowboys Can’t Afford to Take the Cleveland Browns Lightly

Where is Ha Ha when we need him?

And now Colts “steal” RonDell Carter who didnt got chance in the 53man roster, giving chances ando money to experienced and overpayed players.